The Chef's House is a student run restaurant that's part of the culinary program at of George Brown's Chef School. Serving up bistro-style fare under the guidance of Chef Oliver Li, this is fine-dining meets learning lab eatery -- students from both the culinary and hospitality programs greet, seat, serve and feed you.

Since it opened with a new name and new digs on King East over a year ago, The Chef's House had always piqued my interest - the school-run restaurant model has been very successfully adopted by well-known culinary schools like Le Cordon Bleu, The Culinary Institute of America, and here at home, The Stratford Chef School.

But what finally got me to pull up my thermal socks and get over there was not the mixed reviews, but the Rising Star dinner series, a monthly event that started back in September.

The series features homegrown up-and-coming Canadian chefs (mostly George Brown graduates) who have gone out into the real cooking world and started to make a mark. Young cooks who ground it out in popular Toronto restaurants like One, Mildred's Temple Kitchen, Starfish, Oyster Boy, and EPIC, or brought something interesting back to our culinary scene from their worldly travels.

This month's Rising Star Chef was Estelle Yip, a George Brown grad three years out who worked for Eddy Levesque before going on to be part of the opening kitchen crew for Mark McEwan's previosuly mentioned restaurant, One. She was also awarded a prestigious James Beard award to study pastries at the Cordon Bleu in Paris. Now Estelle is teaching at the Calphalon Culinary Centre at King and Spadina.

She developed a menu for the event drawing inspiration from her native Mauritian roots, a culture and cuisine with a mix Indian, Chinese, Creole and European influences, and then lead the team of student cooks to execute it (which she later confessed to the crowd was one of the hardest parts of the night). 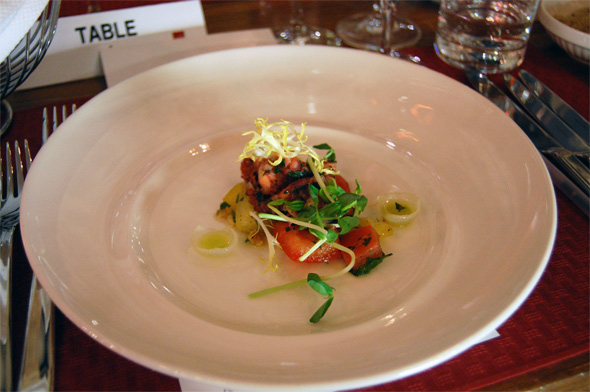 Maybe because I've worked in the industry, or maybe because I was once a George Brown culinary student myself, but I went into the event with an open mind. In an environment where both the front and back of house staff are students, I didn't have an expectation of seamless service with perfectly executed food.

When I arrived the vibe was all hustle, bustle, and excitement as everyone got ready for service and the guests got settled in. The kitchen crew had started plating the first course, while the servers were busy filling water glasses.

At this point I also felt it would be smart to remind the hostess that my dinner companion was vegetarian, even though I had requested it when we made the reservation. While they normally have vegetarian options for their prix-fixe menus, for the Rising Star series it is a set menu and they can accommodate vegetarians if you request it before hand.

To nibble, we were offered up traditional street foods from Mauritius: Pain Frire, a battered and fried potato baguette (served with a coconut chutney) and Gateaux Piments, a traditional Mauritian snack that is very similar to a falafel ball.

The first course was a Warm Octopus Salad with Charred Tomato and Pearl Onion Confit, paired with Henry of Pelham's sparkling wine Cuvee Catherine (pictured above). 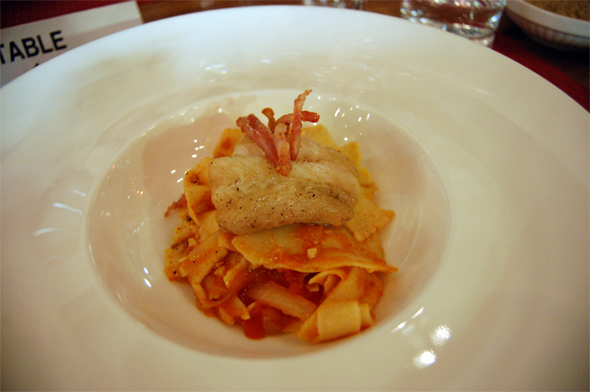 The second course of seared black cod with double-smoked bacon, hand-torn pasta and tomato rougaille. It was paired with a Riesling from Foreign Affair. 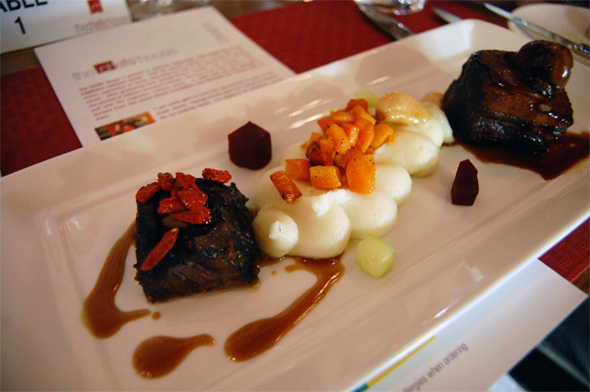 The third course was Madeira braised beef cheek and five-spice braised pork belly, served with mashed potatoes, diced carrot and beet. It was paired with a 2007 Merlot also from Foreign Affair. 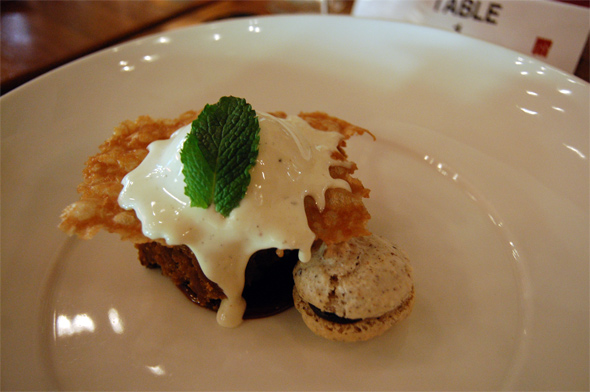 The last course was a sticky toffee pudding with white chocolate cardamom Kulfi and a dark chocolate hazelnut macaron. This was paired with a 2007 late harvest Riesling from Inniskillin.

Overall, the food was great -- well executed, great flavours, perfectly cooked seafood and meats. I enjoyed it very much. But my one complaint would be having to wait for the vegetarian dish at almost every course. In most cases (aside from a specially made risotto), the veg options were comprised of elements from the meat dishes, which would have been easy to put together and get out.

As far as service goes, the students were a little shaky (literally their hands were shaking). We got a blank face when we asked about ingredients, and we were asked if we wanted our water replenished a little too often, but overall it was totally fine. Later, we found out it was the servers' first night in the restaurant.

With a $100 price tag for the Rising Star events, it's a little more than just your average night out for a nice dinner. But the price includes four courses with four wine pairings, taxes and tip. Based on the high quality of food I had at this event (and the fact that I was not super picky about service), it was good value for money. Plus, as an added bonus, you get to support talented young chefs who are busting their rump roasts to make it in a tough industry.

The Chef's House is open for lunch and dinner from Monday - Friday. It is best to call ahead for reservations. Prix fixe lunches range from $18-25 and dinners from $39-45.