Cowbell Restaurant is bringing back the concept of do-it-yourself butchery. With the wave of socially conscious eating at its crest, Toronto locavores are taking nose-to-tail eating to a new level. It's no longer enough to know the farm your meat is coming from, make sure you frequent your local farm-to-table eatery, or experiment with haggis in your own kitchen. Now you have to look your meat in the face, and then watch it be cut up.

DIY butchery is a trend that started resurfacing in London and New York over a year ago, where conscious eaters pack butcher shops and restaurants for hands-on classes to learn about primal cuts and how to break down carcasses. And while it hasn't fully materialized on the Toronto scene yet, Chef Mark Cutrara is starting to push things in that direction. 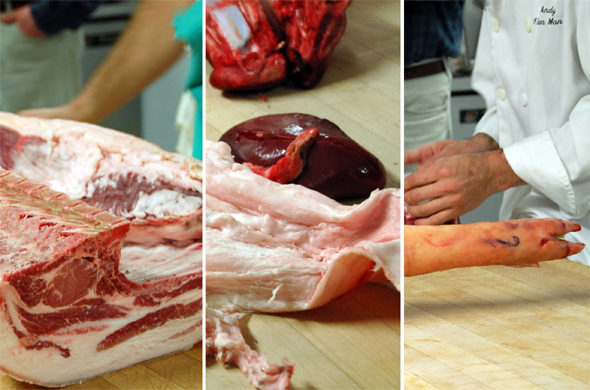 He's launched a series of demonstrations where Cowbell's butcher Ryan Donovan breaks down pork and beef sides, whole deer, and other animals from head to tail. Hosting five sold out events already, Cutrara plans on holding at least one demo per month. 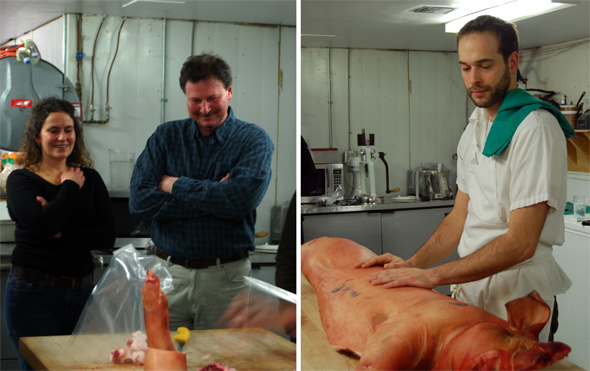 When I turned up at Cowbell on Sunday night, 20 aspiring home butchers filled Cowbell's basement kitchen space to watch Donovan break down a side of Berkshire pork.

As an added bonus, farmers Dennis and Denise Harrison of Dingo Farms (where Cowbell sources most of its meat) were also there to watch the break down of their own pig and talk about their farm. Over four generations of farming on that land, the Harrison family has gone from grass fed, to feed lot, and back to grass fed. I stumbled across this clip that summarizes their story and relationship to Cowbell nicely.

Cowbell's Ryan Donovan has been butchering for years, and excitedly talked about the anatomy of the pig (and farm animals in general), how their muscular systems work, and what that means for the flavour and preparation of different cuts of meat.

Cutrara and Donovan also got into some real-time menu planning, talking over how they would use things like the rind (boiled and put into potato croquettes), head (made into Testina), and trotters (to thicken up stock). 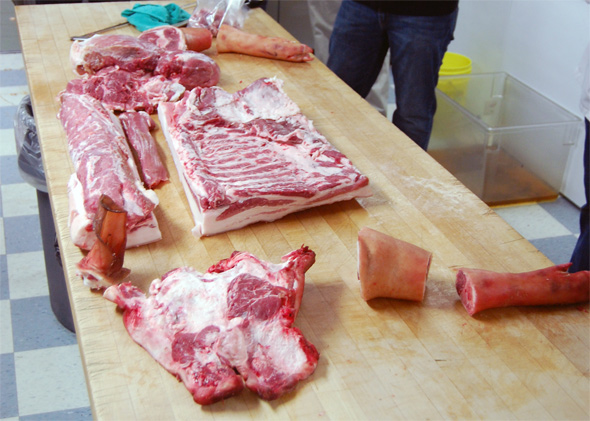 It took Donovan about 2 hours to break down the side of pork. I really enjoyed when he put the porky puzzle back together with the various cuts - trotters, hocks, football and baseball ham, loin, tenderloin, bacon, and head. 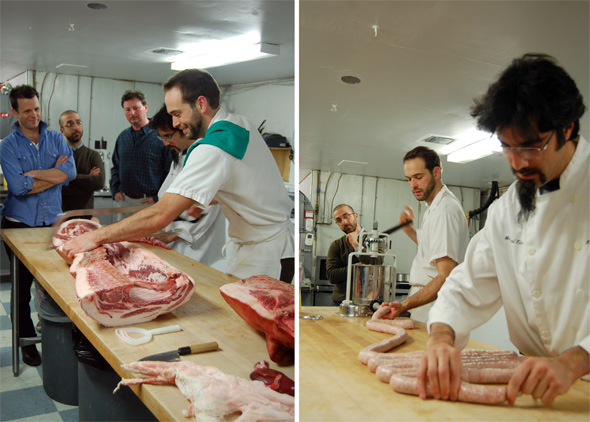 Then he broke out the sausage maker and finished off the demo by making mouth-watering sausages seasoned with honey, garlic, thyme, ginger and oats.

The group finished off the evening by enjoying a pint and a sampling of Cowbell's house-made charcuterie (including a beautiful lardo and venison chocolate salami) that they were making long before The Black Hoof stampeded onto the scene.

With Toronto food mavens like Corey Mintz leading the butcher-love trend, maybe we can hope to see hands-on classes from other nose-tail devotes like the Black Hoof or proper butcher shops like The Healthy Butcher (who currently does demos), Cumbrae's or Sanagans.

But before grabbing a clever and fancying yourself the next Dario Cecchini, maybe catching a demo at Cowbell is a good way to get started.

The next Cowbell butchery class will be breaking down a whole deer on January 31st. Look out for details and future dates on their website.