I drink a lot of coffee. Not as much, I'm sure, as my wife, and nowhere near as much as fellow Canadians, whose thirst for java in all its forms means that major coffee franchisees can open on competing corners from each other, and no up-and-coming urban neighbourhood has truly arrived until it has at least one stylish, serious shop selling latte with artful little swirls etched in foam.

Te Aro opened last spring in a former garage in Leslieville, a neighbourhood with no shortage of coffee shops. Given this saturation, owners Jessie and Andy Wilkin decided to offer coffee tastings to educate their customers on what goes into a cup - and showcase their beans. I managed an invite to the first test run of the tasting - or "cupping," as it would more properly be called - as a way of addressing the fact that, for all of the java I down, I don't really know much about the stuff.

The set-up was familiar enough from wine, sherry, whisky and olive oil tastings I've attended - three glasses numbered but not named, a soup spoon, and empty glass, a glass of water for clearing the palate, a spit cup (in this case a mini cocktail shaker with the strainer reversed) and a sheaf of paper with information on what we're about to taste, including a helpful "flavour wheel" to help you give a specific name to the taste or aroma we might intuit - a typical string of association that might start with something mysterious like "enzymatic," and proceed through "fruity" to "citrus" to "lemon." 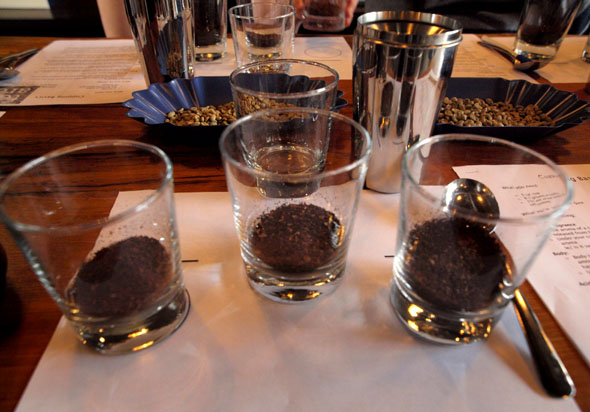 In each of the three glasses was a small heap of ground coffee, each of which we were encouraged to sniff at deeply. The first bore a subtle unmistakable aroma of berries, the second an overwhelming fragrance of malt, while the third had a dark, roasty smell of chocolate and, well, coffee.

Jessie explained that they'd picked a trio of beans that had totally unique characteristics, which was good, as I'd been worried that I'd show up and end up shrugging that all I could smell and taste was coffee; I'm pretty simple that way. Andy poured hot water into each of the grind-filled glasses, and into the empty glass, explaining that we'd use it to rinse our spoon to avoid cross-contamination. As the coffee steeped, he showed us how to taste the coffee, with a big, loud slurp to get the coffee all over the inside of our mouths. "Make as much noise as possible," he encouraged, though as a longtime and notorious coffee slurper, I doubted I'd need much encouragement.

We were told to break the crust on top of each glass with our spoon and take a deep noseful of the aroma as possible. The beans in the first glass had replaced the berries with tea, the second still smelled overwhelmingly of hops, while the third made me think of coffee, and I began to wonder whether a little game was being played on us. Even more surprising was the counter-intuitive fact that acidity is what gives coffee its essential sweetness. 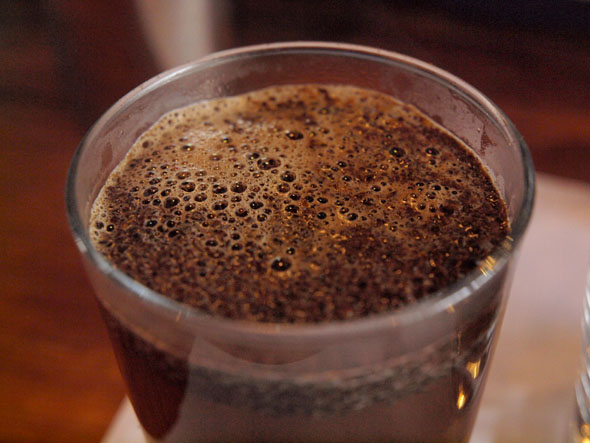 After sifting out loose grounds, we finally put spoon to mouth with big, healthy slurps. The maltiness of the middle glass finally gave way to a taste I associated with coffee, though not nearly as forthrightly as the third one, which had everything - earth, roast, chocolate, a touch of bitterness - I associated with coffee. The first glass, however, was confounding; it tasted more like an herbal tea than coffee, full of citrus and fruit and an undeniable vegetal hint that Andy and Jessie compare to rhubarb. What it doesn't taste like is coffee, and I start to worry that I'm experiencing some sort of stroke symptom, where my brain has spitefully rewired itself.

The third glass - the one I call coffee, straight up - is Sumatran, Andy reveals, and contains the flavour profile most people associate with coffee (including my obviously-not-very-unique self.) The second glass contained Kenyan AA beans - the top grade of beans from the region, and one of the world's most complex flavours, so complex they were mostly lost on me. The first glass was filled with Ethiopian Sidamo beans, the smallest of the raw green beans displayed in the middle of the table, and the ones whose particular appeal was most lost on me. I imagined that they'd be appealing when I was feeling poorly, and wanted a caffeine boost to go with a comforting, tisane-like taste. 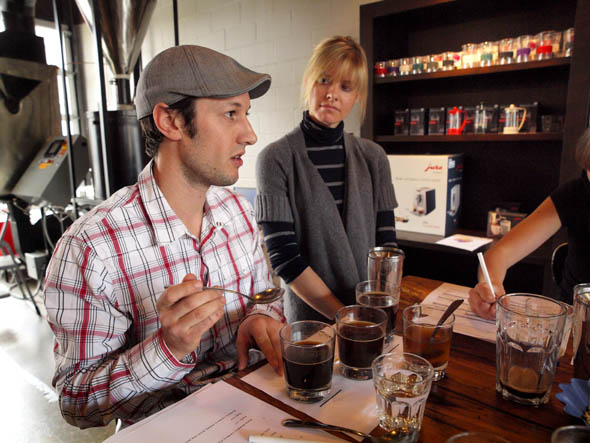 At the end, I'd definitely learned a few things, prime among which was that my own taste in coffee was utterly cod-standard, and that despite the clear diversity of flavour profiles available for coffee sophisticates today, I'd always prefer that marriage of burnt toast and dark chocolate I associate with a cup of coffee, only now I'd be able to disguise my prole-y tastes by professing a preference for a well-roasted Sumatran bean.