Eco-gourmands descended upon the Brick Works Sunday afternoon to feast on slow food served up by some of Toronto's most prominent locavore chefs, inspired by the cuisine of countries far and wide. With more than 60 food stations - and a personal commitment to trying something from each one - it sometimes felt like a dine and dash to get to the next booth. OK, maybe that's the glutton in me talking.

But at an event like this, it's impossible not to stop and smell the food and fall into lively conversation with a chef, farmer or other guest. The free-flowing wine (15+ wineries) and beer helped too, conveniently intermingled amongst the food purveyors. 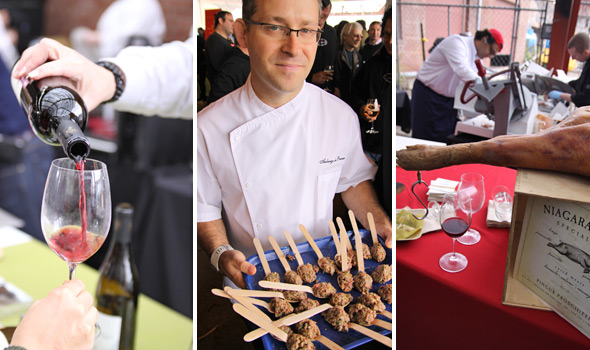 Toronto's local food icons (I'm looking at you Jamie Kennedy) were on hand, but some of my most memorable tastes were from chefs happy to stay out of the spotlight.

Picking a favourite from so many different chefs would be impossible. What struck me was the consistency; I don't think I tasted a single failed dish. Some of course were better than others and several were not my particular taste, but the consistent quality was impressive. I left more convinced than ever that using the best local and seasonal ingredients possible, given a little care in preparation, yields the best food.

A shining example of this was the Drake Hotel's smoked fish on a tortilla chip. The Mexican flavours beautifully complemented Akiwenzie's smoked whitefish, which shone brilliantly. It was on the 'favourites' list of each my companions for the afternoon.

Two different meats on a skewer also emerged as winners: butter chicken with apricot from Palais Royale and Allen's lamb, which was about as tender and juicy as meat can get.
The best lamb of the day, though, may have been from Joshna Maharaj and c5, cooked over an open fire and served with harissa duck egg mayo or coriander peanut chutney. 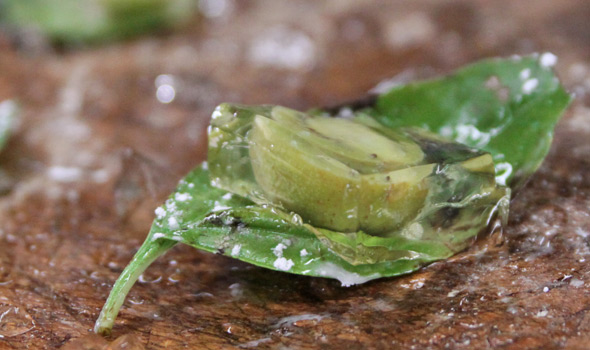 On the sweeter side, Loic Gourmet served up a head turning German plum dumpling, and perhaps the biggest revelation of the day was Table 17's Ontario-grown kiwi in a riesling gelee, wrapped in basil leaf. Apparently this hearty variety of kiwi grows fine in the local climate, yielding a grape-sized kiwi with edible skin.

I know and love Waupoos apple cider but felt delinquent in not knowing that for 15 years they have been making wine; the pinot gris was as crisp as their cider and a perfect summer sipper. The taste was so distinct from comparable Niagara wines that it forced me to appreciate the importance of location - the terroir, as Jamie Kennedy would no doubt proclaim - to wine, and really to most food. 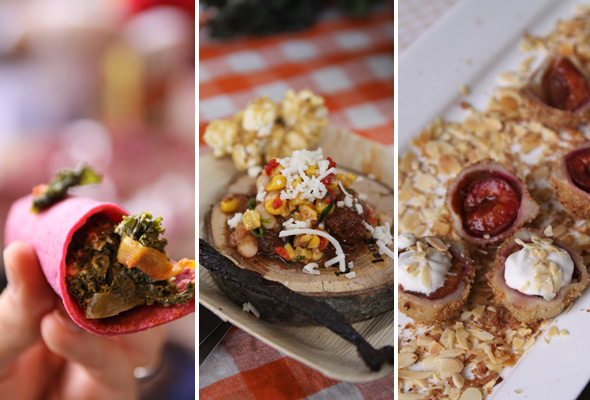 Other beers and wines were good, often excellent, although with so many different tastes, it's hard to find other standouts. The strength of Ontario's wines came through loudest, giving weight to the old adage that when picking a wine to pair with food, look to combine each from the same region/area.

The logistics of the event were my biggest concern as the day began. I knew good chefs with good ingredients would produce darn good food. But would there be enough food? Would the lineups be unbearably long?

The event was sold out - 1100 people - and it's clear the Brick Works knows how to handle a crowd, even in a space that rarely sees more than 300-500 at a time. Although a few popular items drew long queues - the elk stew and jerky from Langdon Hall was the longest wait - it turned out to be remarkably easy to move from table to table and even to find space to sit. That I hardly noticed that it rained most of the event is the best testament to a perfect sized space for the people; kudos to the organizers for not selling more tickets than they did.

Actually, the only real complaint I had was that while each pairing of chef, producer and country was clear (and I can always refer back to the list), remembering the exact food served required note-taking or a good memory. Not a major problem, but it meant having to always ask the vendor. That sometimes meant lovely conversation, but it also meant sometimes I forgot or the crowd was big enough I just did a grab and go.

Slow Food faced some tough questions about the cost of the event - roughly $100, depending on when you bought tickets - but it ultimately seemed a fair price to me. I left stuffed, as did my companions, and thoroughly happy. The producers were paid for their products and any profits will be split between Slow Food Toronto and the Brick Works. Maybe the price kept some people away, but the event is no more expensive than good seats at a musical and cheaper than, say, the recent U2 concert. The food and drink were the draw, but the concentration of local food energy propelled the event above and beyond expectations.