Waiting in line at a west end convenience store to pay for the cold banana popsicle in my hand was the first time I heard the Lambada song filtered through that music box sound.

"Was that an ice cream truck?" the guy next to me with the loaf of bread asks. I guess he saw my puzzled face and felt the same. Pop Goes the Weasel is the usual soft-serve ice cream vendors' tune of choice, but a truck playing the song of the forbidden dance?

The Brazilian dance became an international craze in the late 1980s thanks to the number one hit "Lambada" by French pop group Kaoma. The quick hip-swaying, leg-straddling dance, along with the short skirts in style at the time, contributed to its modern-day "forbidden" image.

For the next few days, I try to track Toronto's Lambada truck. I want to know where it came from and what ice cream rebel would play this song. I call the city's licensing department, talk to ice cream inspectors and vendors, and hang around the neighbourhood where I originally heard the song, circling parks like some pedophile. I get a chuckle when I tell people what I'm looking for.

Most are traditionalists. That's how one Olympic Softee vendor describes himself. "I like the nostalgia that comes with the old songs. I prefer to keep things the same," he says. But now peddlers of cold sweetness can buy music boxes with dozens of song choices and can also download more from the Internet. Most stick to the children's tunes associated with their trade for recognition.

A few days later, I get a call from Mr. X. Really, that's what he calls himself. He says he prefers to remain anonymous.

"Are you the one looking for the ice cream truck that plays the Lambada?"

"Well, he's at Dufferin Grove after 5pm. I know because that's usually my route," he says.

There it was chiming the song of the forbidden dance, surrounded by sun-kissed and sweaty kids who played in the park all day. 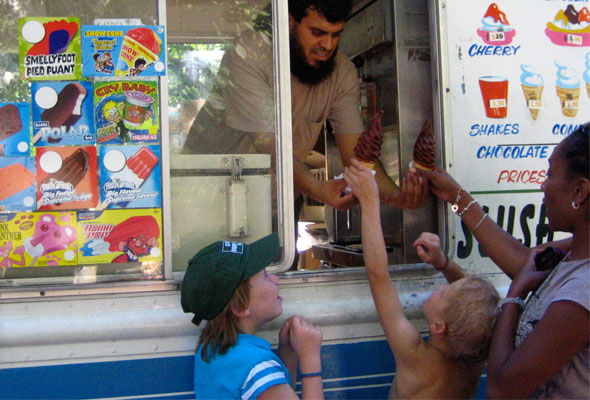 I stand next to the truck with my notepad and pen in hand, waiting for my turn. "Are you inspecting this truck?" a woman in line with two children asks. I guess she's thinking about the recent media attention identifying high bacteria levels in soft-serve ice cream.

I finally speak to the ice cream vendor, Sadek. He's an independent who's been scooping the soft stuff for three years. He just bought a new music box on e-bay from the States because his older one broke. That makes sense. One vendor told me it could be a truck from L.A.

I ask Sadek the question I've been waiting to ask all week: why the Lambada song?

Top photo by Now and Here