Life's an Ontario peach, so they say. Well at least that's what I say during peach season in our fair province, which has been gearing up for the last couple of weeks. You don't have to be the President of the United States of America to appreciate the millions of peaches that can be found at farmers' markets and grocery stores these days (yeah, I can hear the cringes).

The peach is classified as a drupe (i.e. a fruit with a hard stone), along with nectarines, apricots, plums, and cherries. They are native to China and were cultivated there as early as the tenth century BC. It was in the 16th century that Spaniards brought the fruit to North America.

The absolute best peach is a tree-ripened peach, so your best option is a PYO (pick-your-own) farm. Due to the large scale of industrial production, peaches are usually picked from the tree long before they are ripe, transported and refrigerated. When harvested in this way, they tend to be less flavourful and mealy, so I talk to my vendor to find out where and when the peaches were picked.

Also, the blush (colouring) on a peach does not signify ripeness, but is a way to distinguish different varieties. To pick a really perfectly ripe peach, give it a smell. It should be aromatic and slightly sweet smelling. It should also be firm, but give to gentle pressure when pressed. If you're peaches are ripe, you can store them in the fridge. If they aren't quite ripe, put them in a paper bag for a day or two. And never wash peaches until you are ready to eat or use them.

So what to do with these fuzzy little flavour bombs when you get them home? My first really tasty and juicy and near perfect peach of the season always conjures up images of James, eating the flesh of that perfect giant peach to his heart's content. At which point I always think, why eat them any other way? 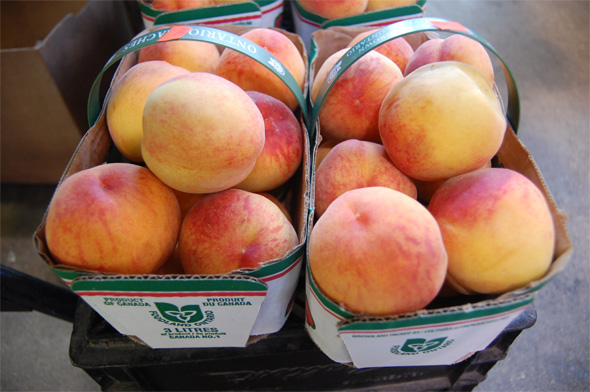 But eventually I remember the cobblers, parfaits, morning yogurts and smoothies, the poached and grilled peaches, the cocktails, the coulis, compotes and jams, and that's when I start making plans to freeze those suckers to eat all year round. And speaking of freezing, who can resist a classic dessert of Peach Melba?

The best way to freeze them is to blanch for about 15-30 seconds and then plunge them in ice water to easily rub off the skins. Then you can slice them up (freestones are always best for this kind of thing) and add sugar if you like. Pack 'em in a container and then they can be stored for up to a year.

Due to a generally crappy/cold/rainy growing season thus far, a lot of peaches out there have been puny and tasteless (as a farmer once told me heat=sweet). So I would wait a couple of weeks for the season to peak.

In the meantime scour the city for the prettiest, most juiciest and tastiest peaches you can find. Or go out and pick your own, but don't let peach season pass you by without having at least one of those truly perfect summer pleasures.