The ale was on song this past Sunday at the Victory Cafe for their Summer Cask Ale Festival.

Showcasing the best of our local Ontario cask-conditioned ales, the festival brought together a burgeoning niche of beer lovers and general patio goers for a hustling and bustling afternoon event.

Cask-conditioned ale (often called 'real ale') is beer made using centuries-old traditional techniques that were employed before kegs, pasteurization, additives or refrigeration became the norm. It is often made with only four natural ingredients - water, barley malt, hops and yeast - and matured in the cask from which it is served. Each beer carries unique flavours that can include anything from floral citrus notes to rich sweet cocoa and coffee notes. 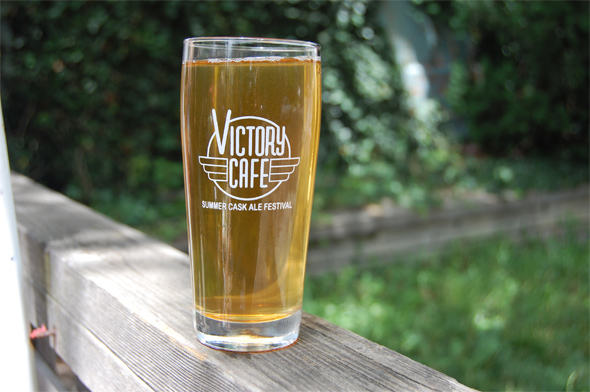 I personally tasted 6 of the 20 beers on offer, and I can't say there was one that I didn't like. One of the most interesting things about cask ale is the fact that it is artisanally made - the unique characteristics of each beer are carefully controlled by the brewmaster and developed as the beer matures in the cask. Since there are no preservatives and it is not pasteurized, it is a living beer that has a short shelf life and is always consumed fresh and locally.

Like a wine tasting, it is best to start off light and move into more complex and heavy beers, so I started with a Belgian white ale called Witbier from County Durham Brewing Company. It had a beautiful floral and citrus quality to both the aroma and the flavour. I later learned from Victory Café co-owner Blake Smith that these notes are due to the addition of coriander and dried curacao orange peel during brewing.

Next was the Stonehammer Strawberry Light lager from F&M Brewery that was, just as the name suggests, nice and light with a well-balanced strawberry aroma and flavour and a faint sweetness. Mashed Ontario strawberries are added to the cask during conditioning. 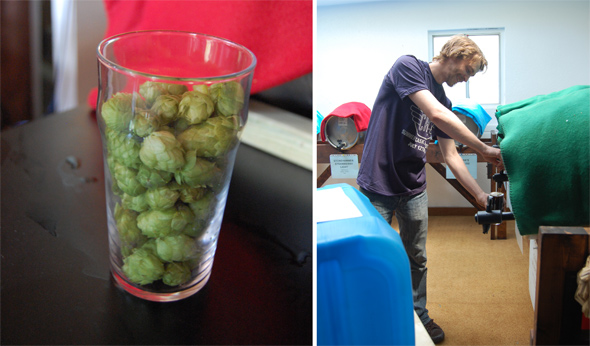 I moved onto Summer Saison (Marmalade Edition), a Belgian Saison from Black Oak Brewing Company. It had a wonderful cooked down citrus flavour with a distinctive spice from the addition coriander during brewing, and citrus peel (lemon, lime and orange) to the cask during conditioning.

After that I had MacLean's Ales Farmhouse Ale, which had a faint aroma and a delicate flavour that, for me, was reminiscent of banana bread. For this beer, dry Nugget hops were added to the cask that Charles Maclean grows on his farm in West Grey.

Then I moved into the heavy hitters of the afternoon. Hopping Mad, an American Pale Ale from Granite Brewery, was full-flavoured with a surprising but well-balanced bitterness that was a nice contrast from the lighter beers I had been drinking. 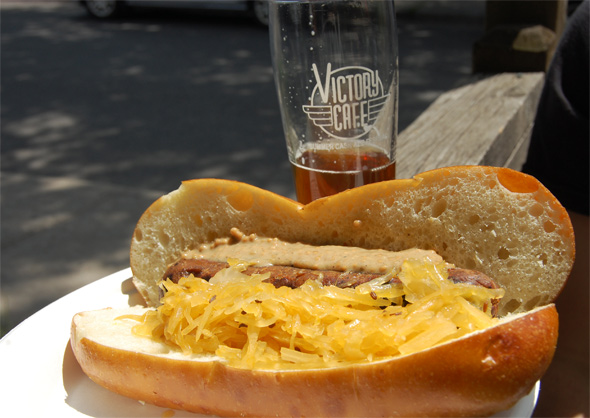 I finished off my sampling with Black Velvet, a combination stout and honey cider. It was a complex beer with a caramel aroma and wonderful coffee/cocoa flavour with a surprising sweetness. It paired quite well with the savoury and salty qualities of the bratwurst I had on a pretzel bun with grainy mustard and sauerkraut. 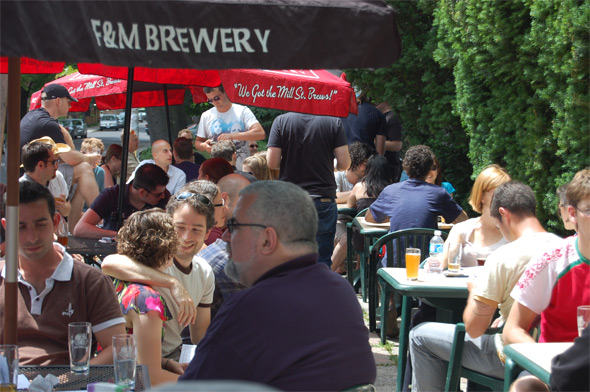 At Victory's summer festival the weather was fine, the bratwurst was hot and the ale was flowing from 12pm until it ran out. The price of admission was absolutely great value, for only $12 you got two half pint beer tickets, a food ticket, and a Victory Café commemorative glass - making it a must for summertime beer and patio enjoyment.

Keep your eyes peeled 'cause Victory Café also hosts a Winter Cask Ale Festival, and if you want to learn more about cask ales and where to get them in Toronto check out the CASK! website.