As Americans go to the polls today, Queen of Tarts is offering a way for those of us north of the border to cast our ballot: Obama, McCain and Palin cookies are available for purchase. One (or three) of these cookies makes for a tasty snack on the way to an election watching party, with the added satisfaction of the opportunity to break off Sarah Palin's head.

A couple of weeks ago, we gave a heads up on where to party if Obama wins (and watch the returns), but there's more.

Rasputin Vodka Bar is airing results, Canada Votes Obama is holding their shindig at Wayne Gretzky's, and the Department of Culture is inviting folks to the Gladstone Hotel's Melody Bar. Both of the latter events are free.

It's hard to believe, but after two years of nearly non-stop campaigning, today America will choose their leader for the next four years. 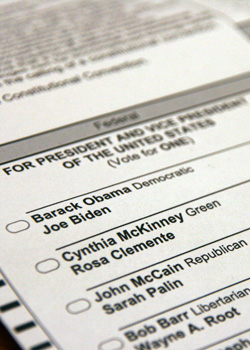 Obama cookies have been on sale for quite a while, at one time facing off against Hillary Clinton cookies, and have been a steady seller. McCain, on the other hand, is something of a sales dud, perhaps signaling that Torontonians aren't looking for maverick cookies.

But since mid-September, the Tina Fey look-alike from Alaska has been the top seller. Of the nearly 150 cookies of each character made, there are about twice as many Obamas left as there are Palins. Less than 50 McCains were made, which adequately met demand. Apparently he's just not as much fun to eat, or smash, as Palin or Obama, although Joe Biden isn't popular enough to even have his likeness on a cookie.

Cookie design and decoration is done by Joan Dempsey, the sister-in-law of Queen of Tarts owner Stephanie Pick. Although known as the best baked treats in Toronto, Dempsey and Pick have been making character cookies for a while. Their best seller hasn't been the American politicians, though, but it's an American famous for lampooning American politicians: Stephen Colbert.

Regardless of the outcome today, the cookies will be available for a while at Queen of Tarts. Each candidate is hand-painted on a gingerbread cookie.