Rollup the Rim - Making Litterers Out of Losers?

This time of year is marked by the beginning of the thaw, the return of the geese, and if you're a fan of Tim Hortons - a chance to win free donuts and coffee (and if you're really lucky some even more bling prizes).

Last year there was the whole winning-cup-in-the-garbage-3-way-battle for an SUV story that made national headlines. But every year there's a story that doesn't gain the same amount of media attention, but usually comes up - the litter story.

Unfortunately there seems to be a lot of sore losers out there that will gladly make the effort to roll back the rim on the cup, but not make the effort to put litter in its place. Does this contest make litterers out of losers, or do people just litter a lot all the time?

I'm of the mind that there is more coffee cup litter at this time of year, and if I had the time, I'd conduct a local litter study (I counted 14 discarded cups on my trip from work to home yesterday but have no hard stats, obviously).

Here are some numbers I was able to dig up: 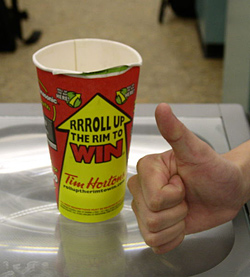 Despite going to great lengths to deliver the "don't litter" message to its customers and get involved in community clean up projects, Tim Hortons' cups still end up all over the city streets. Take a walk and scan the ground, checking out planters, the TTC tracks, stairwells, bus shelters, etc. Clearly, their efforts are futile.

What more can Tim's do?