The Christmas season is upon us, and with that many Torontonians will be heading to the Eaton Center for their last minute shopping adventures. While there's more than a few "restaurants" in the mall, not more than a block away lie a couple of road-dog trucks with some sweet prices for far too much food. If snow ever does decide to fall on the streets this year and you're caught outside, or you just have an urge to eat something absolutely terrible (for your body, that is), it'd be a good idea to know which of the main three trucks just off of Queen W. and Bay gives the best bang for limited bucks; yes, there are other trucks in the downtown core, and yes, I'm sure if I wanted a really awesome super-dog, I could spend 6$ somewhere else that serves the gourmet $#!%. For blogTO's Comparison Shopper debut, I enlisted the help of my friend Sam, and we ate about 10,000 calories worth of "meat" each just so you'll only have to eat the best 3,300.

We'll describe these in order, from the closest to the corner of Queen and Bay, to the furthest of the three. My basic rule was to get the advertised combo, along with anything that was offered without specifically asking for it, regardless if it was a free add-on; we're also looking at the service, people! Condiments were added to the hot dogs (the options at each truck will be mentioned). Gravy was not added to the fries, though, it should be noted that all three trucks offer it at no extra charge. Speed of service was pretty equal between the three. I'm not going to assign a rating scale of any sort, though I will mention specifics if one truck had "the best of something" of the three, as well as my overall pick of the litter. 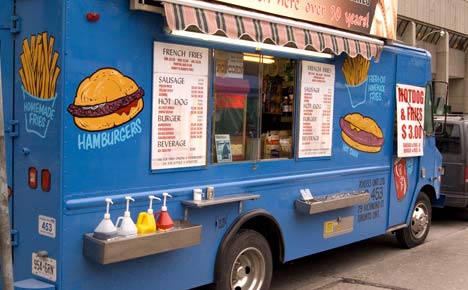 At this truck only, I ordered the street meat on my own, as my coworker was all like "But I want to get noodles from Richtree today!" Pfft, her loss. $3.00 will net you a fat dawg and fries. 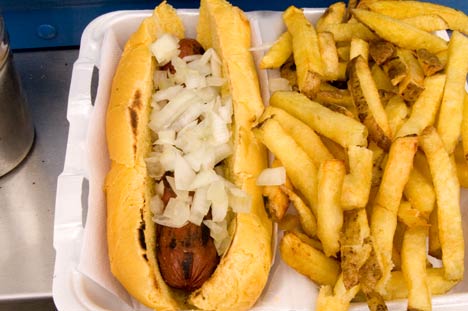 I ordered a combo, and a combo I was given; I wasn't offered any of the extras that were advertised. The dog itself had the strange taste sensation of being both beefy and synthetic. It wasn't unpleasant, though, as it was cooked well, and left a satisfying rock in my gut. The bun was the standard street dog yellow-ish kind, and served the purpose of holding my onions and mustard. I'd've preferred something with a little flavor but wasn't aware of any other options. The fries here were the best of all three trucks, as they were cooked well and I didn't bite into any that were burnt to a crisp, nor cold and flaccid. Overall, the dog was generally good, once you get to the second bite and the flavor has sunk in as OK, while the fries were great. Sadly, the condiment selection is thinner than Kate Bosworth after Orlando dumped her. No extras or options were offered without being asked. 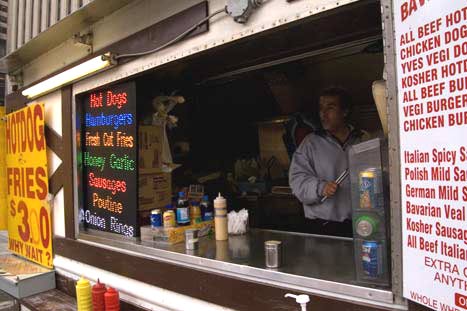 We actually visited this white truck first, as it was a previous favorite, due in large part to the disgusting black gravy offered by the first truck. For the purpose of this study, however, gravy was no longer an issue. 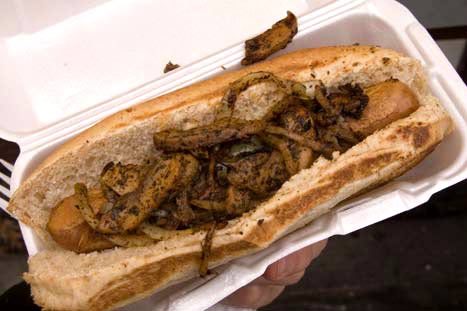 OK, the guys working this truck get major props for setting a standard that we would carry on through to the other trucks, as we were not only offered a choice of either a regular or whole wheat bun (whole wheat FTW!), but also some cooked onions and mushrooms atop our dogs, all for the price of $3.00 for a dog and fries. We'd never imagined such a concoction, so we said yes, of course. Our request for 4 separate holders for each dog and fries (it was drizzling outside) was met without complaint. The bun was easily better than the plain yellows of the other two trucks, but the dog itself left something to be desired, for me. My friend disagreed, and she places Truck #2's dog at the very top of the bunch. I found it to be a little bland; for all the extra onions and mushrooms, it all seemed like unflavored tofu to my taste buds. It wasn't bad, but it definitely wasn't good either. Perhaps it needed to be cooked a little longer... on that note, the fries here were rushed out of the fryer, as there was many a cold and damp potato in the bunch. Not impressive, considering there wasn't even a line up to work through. Still, the friendly service and plain-as-day available options are definite plusses, and not to be overlooked. On top of that, Sam gave the dog itself an enthusiastic thumbs-up, so perhaps I'm merely missing something. 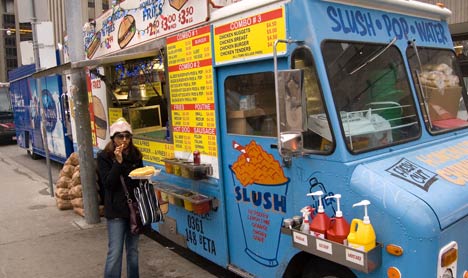 This truck, while furthest from the corner, may well be worth the trek. For $3.50, you get not only a dog and fries, but a can of pop as well. This is something we missed with the other two trucks, as some bubbles would have greatly helped in washing down the meat of the days prior. 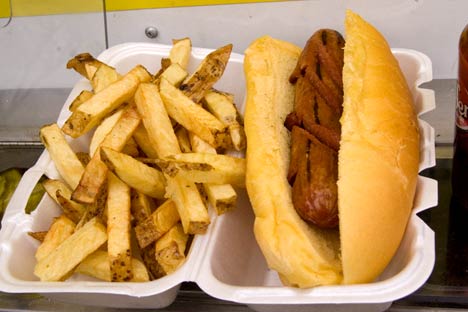 Similar to the first truck, we ordered our combos, and got our combos, but without any extras being offered. There's a sign regarding mushrooms and onions, but, hey, other guys are giving it away with smiles on their face, so I wasn't about to ask. No bun options were mentioned either. Things got interesting pretty quickly, though. Yellow bun aside, I pick this truck to have the best tasting dog of the three; didn't taste synthetic, and definitely was not tasteless. When I order a road-dog, this is what I expect to get. Not only that, but there's a veritable cornucopia of condiment options, two-tiers worth, plus multiple mustards and hot sauces. If you find that you prefer another truck's dog, I'd suggest sneaking over to the third one and discreetly selecting your additions from there. Given the options, I decided to try the Hot Mustard (there were several varieties), some juice from the pickled chili peppers, and my usual cold cut onions all over. My mouth is still burning, 4 days later. I was very happy to have a can of Diet Coke to go with this order. Regardless, the dog easily received my "best of award", while Sam thought it wasn't as good as Truck #2's. The fries, on the other hand, fell somewhere between the other two trucks. Not too great, but not piss-poor either.

Given the options along with the fact that unlike our criteria, you can request various additions, I give my Truck of the Block award to the third from the curb. Tasty dogs coupled with the suite of condiments and a drink for the low price of $3.50 means you'll be able to satisfy whatever your urge is for the day. Sam wants me to tell you that I'm wrong and that you should visit Truck #2. Truck #1 was fine as well, but the fries don't make the meal. I'm feeling a little peckish, so I'm off to get some cheap pizza.

Photos courtesy of me. Thanks to Sam for shaving off 6 years off her life along with me.