It's a testament to human ingenuity that old stuff which outlived its obvious usefulness can be creatively recycled and add richness to the world. Truly, it can be said, one man's trash is another man's gold. And so I've come to do some antique sniffing.

Update: The Queen West Antique Centre has moved to Hamilton.

In all honesty, this area of Queen Street is a bit forgotten. It's a little like a "displaced person" or internal refugee after a long war. In this case, it was the no-prisoners real-estate war of the 1990's. It's not quite in Roncesvalles , and it's way past most of the action in Parkdale . What collects out here is flotsam and jetsam and a lot of antique shops, all huddled together at the end of Queen.

But it's less a place where old things drop off the map than it is a place where things that reached the end of the line are snapped back and born again.

The creatively named "Queen West Antique Centre" used to be a mini-mall for antiques, with lots of vendors and open space, before it died. But the store that's grown up in its place is worth a look-see despite its vague sense of shabbiness and the overwhelming smell of dust and old paper.

There's not a lot of it, but some of the seating is occasionally interesting. The overall theme seems to be "Suburban Bungalow", from the days when TV was new and men had yet to walk on the moon. It's all slightly more worn than second-hand places elsewhere, but the prices are definitely much better.

They have a good collection of old desks, most of them industrial and made out of sheet metal, though a few look like they belong on the set of a 1970's police movie. Most of them were never meant for home use, and given that they're also just old enough to look out of place these days, they might add the right contrast to the right room.

The owner collects items from a most unlikely source: schools. There are things here that were old school when I was in school. They have everything you need to outfit a classroom circa 1960. There are pull-down science displays by the dozen, globes aplenty, old wall maps, art, wonderfully retro school desks and odds and ends. There's even a wall display of old trophies, a sad comment on how ephemeral our teenage years truly are.

There's a definite industrial feeling about the mish-mash of things on display. There are bits of machinery and odd mechanical devices, and a lot of painted metal. The huge collection of tables and industrial remains, like trolley carts, come from every style zone of the last 40 years. 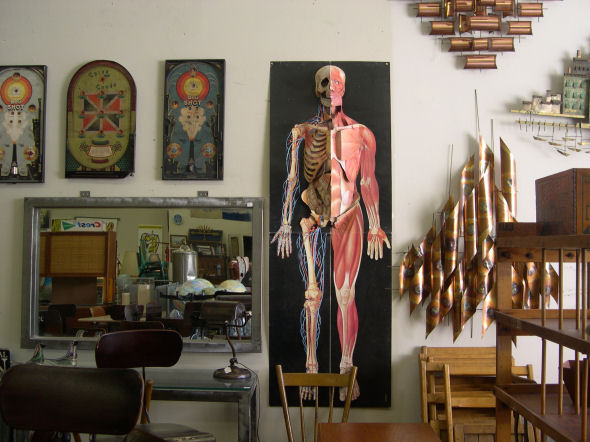 What really gets my attention here is the medical paraphernalia. Somehow, the owner acquires old plastic anatomical models with removable parts (don't lose your liver, young man, you never know what question may be on the exam) and anatomical wall displays that are slightly too accurate for my own tastes. And then there are the science charts, like the one with the anatomical map of a starfish or the one with a detailed diagram of a hydra. Science labs were the source of some of these things, I'm sure. Apparently, the model hearts are the biggest sellers. 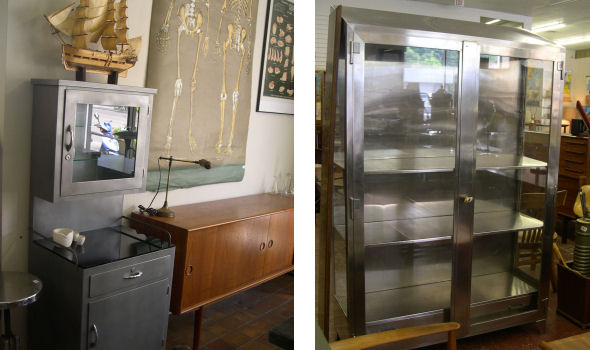 The biggest score is the collection of old medical cabinets. They're shiny and stainless steel and look like they could fit in well in, say, a shiny, stainless steel kitchen, or maybe the right kind of dungeon. They get them in regularly, but they go out just as quickly. And they're not that expensive, given that they're solid metal and glass. They go for about $4000 apiece.

Of course, like all well-stocked antique shops, some of the material remains in this place were common at one time but are now totally forgotten. Or they're just plan weird. Surely, this stuff has to be useful to someone. 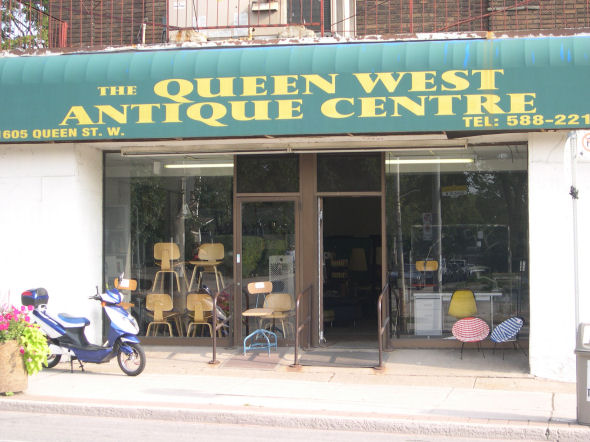