The Danforth Music Hall has closed its doors. A bailiff's noticed posted on August 16 claims that the tenant who runs the concert hall, Ellipsis Leisure Retail Inc., owes $44,857.86 in back rent. The notice comes two months after the much-loved venue -- and heritage site -- celebrated its 90th anniversary. Originally a place to take in Vaudeville and other stage performances, the current incarnation of the space as live music venue followed significant renovations in 2004/05.

Calls to the venue made yesterday went unanswered, though one fears that the sign posted on the entrance tells the story of its immediate fate. Unlike a number of business that have been mourned in these pages, however, the end of Ellipsis may not signify the ultimate death of the Danforth Music Hall. No offence to the now-defunct operator, but in this case, it's the venue itself that sparks the feelings of affection.

And affection I have.

In addition to the plethora of wonderful shows that have graced the stage here, fans of Arcade Fire will remember at least a few performances that would make one doubt that they're a Montreal-based band (be it post-blow-up in Spring 2005 or the more recent back-to-back shows in early June). One can only hope that the last "Wake Up" performed at the DMH won't represent some swan song for the long-standing venue. 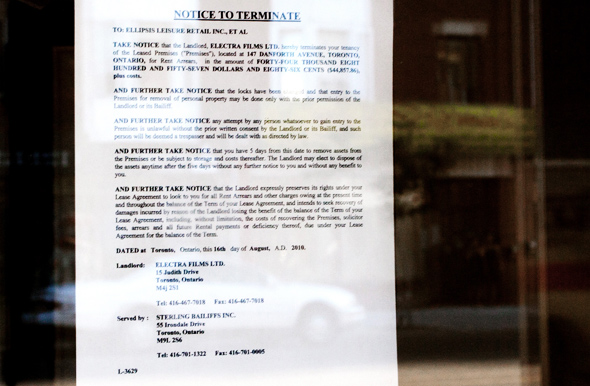