Deadpool looming for This Ain't the Rosedale Library?

It appears that This Ain't the Rosedale Library will be the latest bookstore to enter the deadpool. Although not gone just yet, a notice of distress posted on the store's front door Saturday paints a pretty bleak picture. Alleging that the long-loved bookseller owes $40,000 plus costs, ownership has been given five days to pay their back-rent or the landlord will seize and ultimately sell the store's contents. 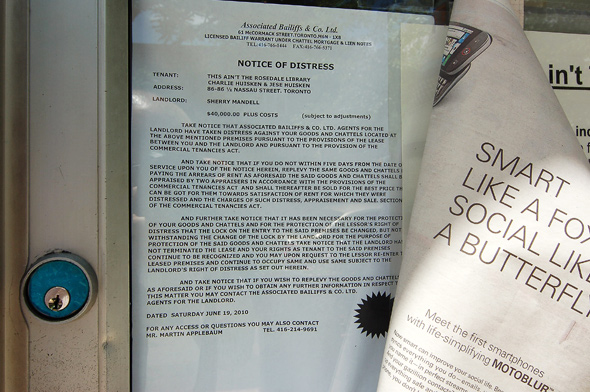 Although I've yet to hear back from an email sent to Charles Huisken, who owns and runs the store with his son Jesse, my visit to the store on Sunday confirmed that it is currently closed. The notice does, however, state that the Huiskens can enter the premises should they request to do so. That they haven't, I would have to think, is not a good sign (phone calls to the store today went unanswered).

Those passing by the store might not realize how dire the situation is that the Huiskens face. Someone has taped a NOW Magazine cover over-top the bailiff's notice in a show of protection of the store's reputation or perhaps as a sign of disbelief. As I was snapping photos, a number of Kensington-goers were milling about, presumably wondering why the store was closed on a Sunday when the posted business hours are 10:00 a.m. to 6 p.m. 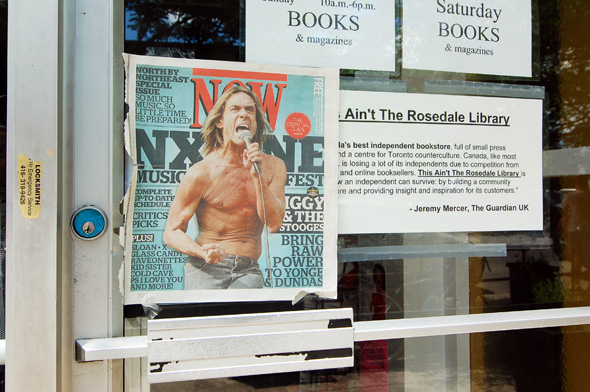 It wasn't so long ago that I was chatting with Charles and his son about the fate of the book business and how they were managing to stay afloat. A move from their long-occupied Church Street location over two years ago seemed to reinvigorate the business, and Charles spoke fondly of the enthusiasm that Jesse had injected into the day-to-day operations of the store.

Should they be unable to settle up with their landlord, This Ain't the Rosedale Library will join a growing list of independent booksellers who have closed their doors in the last couple years. Along with the much publicized loss of Pages, Toronto has seen the demise of David Mirvish and Ballenford Books, not to mention the near-end of the Toronto Women's Bookstore.

The splash page of This Ain't the Rosedale Library's website features a clever, if prophetic, modification of a well-known Alexander Pope line: "Angels rush in where fools fear to tread" (as opposed to the original "fools rush in where angels fear to tread"). I can't help but read this as a statement about the risks and benefits of running an independent bookstore. And what's rather distressing is that the current situation at the store lends more credence to the original adage than its revision.

I'll provide an update when more information is available. See the full notice of distress below. 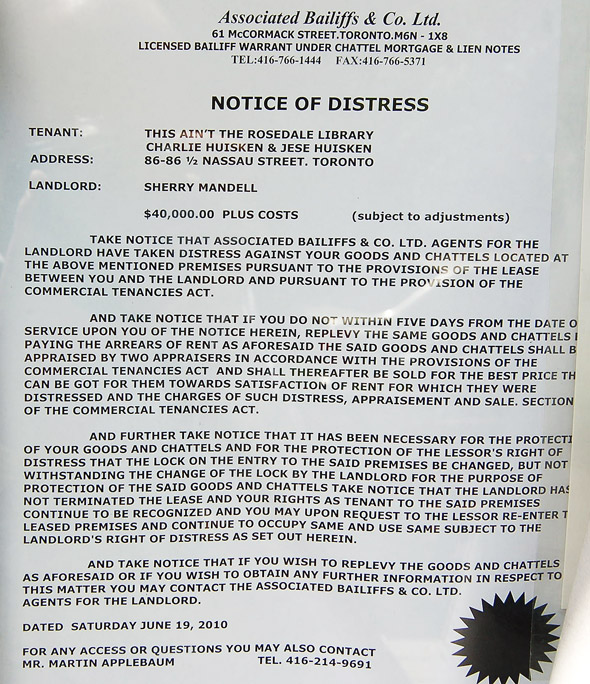 Update (June 23, 2010): As some readers have noted, Charles and Jesse Huisken have written an entry on the store's website that offers their perspective on the situation and the possibility of donating money to help keep the store afloat. See here.