Today in absolutely bonkers footage from Toronto-area highways, we have five people who risked their own lives to pull a complete stranger out of his car as said car started bursting into flames.

Ontario Provincial Police shared what's fast turning into a viral video late Wednesday, writing that "a 36 year old man from Toronto who experienced a medical episode is alive because of the heroic efforts of five men who risked their lives as the vehicle began to burn with the driver still inside."

The one minute and twenty-second-long video starts with some dashcam footage in which a cloud of smoke can be seen rising from the shoulder of the westbound QEW at Cawthra Road.

A quick cut leads to footage that appears to have been shot by someone holding a phone as three men desperately attempt to open the door of a damaged white sedan from the outside.

A 36 year old man from Toronto who experienced a medical episode is alive because of the heroic efforts of five men who risked their lives as the vehicle began to burn with the driver still inside. They got the drivers door open to save the driver. You are my #HERO. July 4, '22 pic.twitter.com/bwE43tMhn1

The audio in this clip is clear, allowing viewers to hear everything from the crackling of the fire growing around the car to the horrific screams of someone trapped inside.

"Get out! Get out of the car!" the men outside can be heard shouting as they kick and bash the badly-damaged driver's side door to and open it.

"Buddy, get out of here!" yells one of the man as he attempts to pull the driver out through a back passenger door, flames rising higher and higher around them.

Two other men soon join the frame to start helping. One of the men eventually manages to crack the glass of the car's driver-side window, at which point they brush away the glass and start hauling on an inflated airbag to try and save the vehicle's occupant. 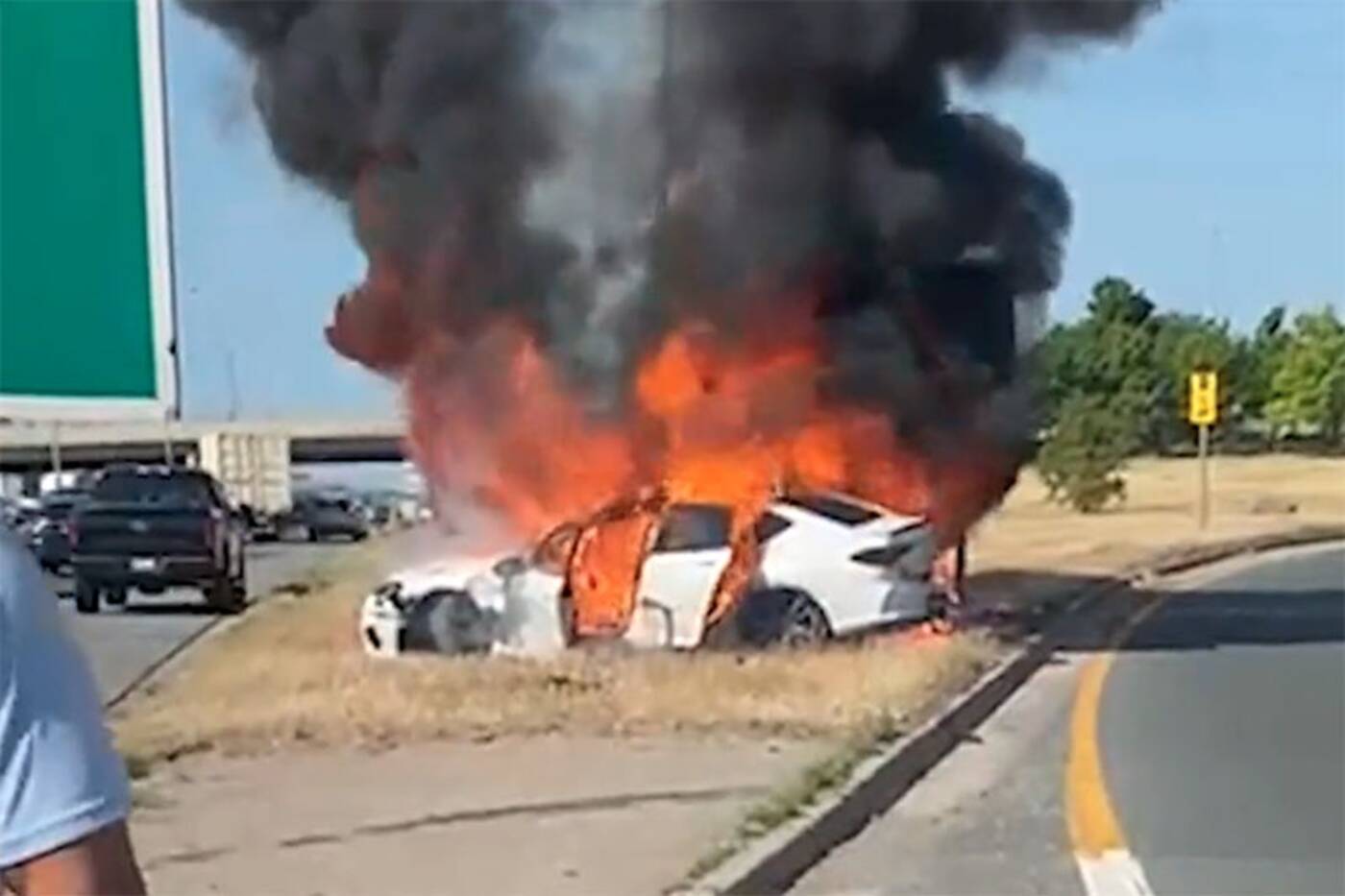 If not for the efforts of several men who stopped along Toronto's QEW near Mississauga earlier this week to help a driver in trouble, said driver would have been killed inside the inferno that soon engulfed his car. Image via OPP.

And then, another quick cut; this one directly to footage of the car engulfed in fire. The driver, who is believed to have crashed on account of a medical episode, is no longer inside at this point.

We don't ever see the driver in the video, but police report that he made it out of the car before it exploded, and that he is only alive today thanks to the selfless efforts of the Good Samaritans who stopped to help him.

"They got the drivers door open to save the driver," wrote the OPP Highway Safety Division in a tweet issued Wednesday night. "You are my #HERO."

"What an incredible act of bravery by those men. Hope that the man will fully recover from his medical episode," wrote one Twitter user in response to the OPP video, capturing the sentiments of many.

"Would be nice to see everyone reunited at a later date to award them for their bravery that day in helping this young man out."