Staff, customers and even pedestrians walking by Sweet Pete's bike shop in the Annex on Thursday evening can count themselves lucky to be alive after a motorist crashed directly into the beloved Toronto store during rush hour.

And by "into," I literally mean that the car drove through the shop's front window and entered the showroom, destroying oodles of pricey merchandise and sending a heavy radiator flying some 40 feet in the air directly toward the cash register.

"I'm just grateful that no one got hurt. Between the driver and passenger, potentially pedestrians on the sidewalk, my staff and customers, the potential is something I don't even want to think about," owner Pete Lilly to blogTO, noting that his staff members could hear an engine revving before the glass shattered.

"The car came right through. It avoided a Green P ticket dispenser and a gas meter. Fortunately, all of the customers and staff were further back in the store. That's the most important thing."

Toronto drivers crash into buildings on a semi-regular basis, but it’s a little on the nose to crash directly into a bike shop. pic.twitter.com/PMveu4sQiq

Toronto Police confirmed that they had recieved reports of a driver crashing into a bike shop on Bloor Street West near Howland Avenue around 4:57 p.m.

Two people inside the vehicle, a Volvo, were eventually taken to hospital by paramedics. The nature of their injuries is unclear, but Lilly says both occupants were walking around and talking to police before EMS arrived.

TPS Traffic Services is still investigating the crash, the cause of which is unknown. Lilly has yet to determine the amount of damages sustained, but told blogTO that the front end of the shop at 517 Bloor St. W. was completely totalled.

"We were fortunate we had a contractor come right away to board it up, but the front end needs to be completely removed and replaced," he said, citing the broken window, door, framing and water damage from the radiator being ripped out and thrown across the room. 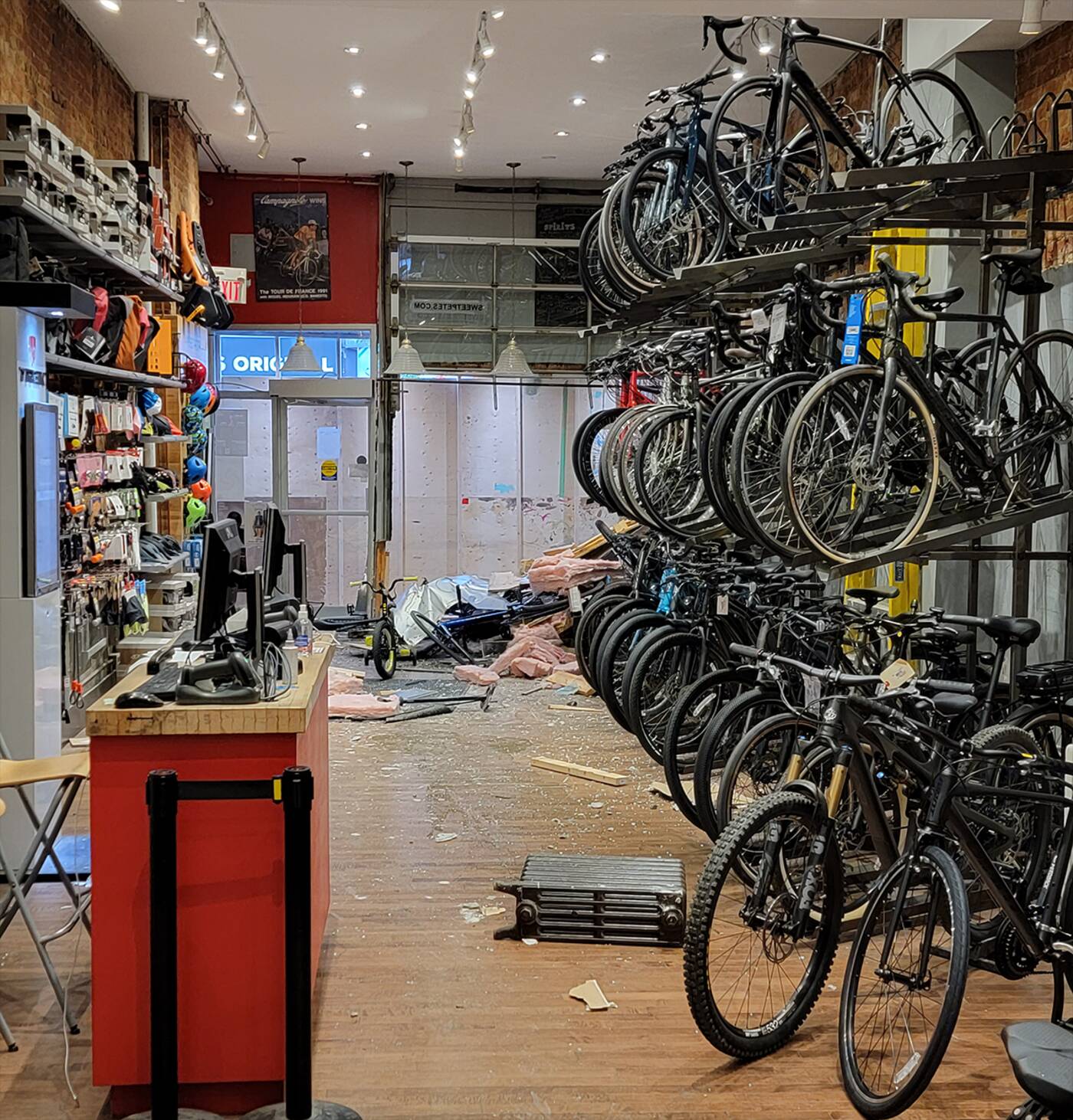 This image shows how far the black radiator, originally situated beneath the front window, flew when the car hit Sweet Pete's. Anyone standing in front of the cash could have been seriously injured or killed by the heavy debris. Photo via Pete Lilly.

While he is incredibly grateful that nobody was injured, Lilly says he can't help but feel a bit cursed on account of the timing: The Annex location of his business had only just fully reopened after dealing with widespread supply shortages and flood damage from a neighbouring store.

"That store was working with limited inventory, only doing repairs and service," said Lilly of his Annex location, which opened about 15 years ago (the original Sweet Pete's in Bloordale has been open since 1997).

"We had just finally got the floor fixed from the flood and were getting more inventory in, so we reopened normally this spring," he said. "The bikes that were damaged [in the crash] are not replaceable. It doubly hurts that you can't buy bikes these days."

Despite the incident, Lilly says that his Annex store will remain open, doing service and repairs out of the back. It's open today, in fact, though the owner has yet to determine when on-site shopping will be available again.

I live across the street. I can’t figure out how the car managed to hit the bicycle shop while leaving all the other parked cars and the parking meter untouched and the first responder said the same thing pic.twitter.com/J6UcnU7erE

The whole situation is unfortunate, but a silver lining has emerged in the form of widespread support for Sweet Pete's from the neighbourhood and entire cycling community.

Lilly says he's been recieving nonstop texts and calls since the car crashed through his shop's front window, noting that the news seemed to have travelled fast.

Indeed it did, primarily throught Twitter, where images of a car lodged into the front of a Toronto bike store was too perfect a metaphor for many to resist making jokes at the expense of John Tory's ineffective Vision Zero plan.

"To be fair, the bike shop wasn't wearing a reflective vest before crashing into the vehicle," joked one person, poking fun at police and city efforts to crack down on road deaths by handing out reflective arm bands.

"Person drives vehicle over bikeway to crash into a bike shop might be the perfect #BikeTO tweet," wrote another.

Why wasn't it in high vis??

But it's not all jokes; some are holding up the incident to criticize the city's actions (or lack thereof) when it comes to protecting road users who aren't inside vehicles.

"Seems like the bike lane paint did NOT magically reflect the errant driver and his 1.75 ton mass of steel death away," wrote another sarcastically. "How could that be @TO_Transport ?!"

Tensions between cyclists and motorists in Toronto have long been high and will likely remain that way for some time. What's important, says Lilly, is that nobody was injured or killed this time around.

"It's just a total fluke that no pedestrians or customers were hurt," he said. "The situation stinks, but oddly, I feel very lucky."