A campaign to remove the bike lanes along Yonge Street is using a bike accident and environmental causes to back up their point.

As soon as the bike lanes were added this summer on Yonge from Bloor Street to Davisville Avenue, people started complaining.

People cited gridlocked, backed up traffic on Yonge Street and surrounding sidestreets. Almost immediately a group, No Yonge Street Bike Lanes, sprung up to get rid of the bike lanes.

The lanes were part of an ActiveTO Midtown pilot project to connect the city cycling network and now that a decision to make them permanent is coming to council this April, the campaign is ramping back up.

People are invited to have their say about the project before the Infrastructure and Environment Committee meeting on March 29 and City Council meeting on April 6 to 7.

A group, Be Rational TO, suggests the bike lanes are not good for the environment because vehicles are sitting in traffic and creating pollution. They also say there isn’t any data to show how many cyclists are using the lanes.

A petition on Change.org, launched last year, uses a story about how emergency services were unable to reach a cyclist injured quickly because of the traffic congestion.

"It took police about 25 minutes to arrive at the scene, and the ambulance did not get there for almost 45 minutes!" the petition notes. "Attendant EMS support was delayed due to the lack of passable space."

From a staff report: “Note: this cyclist has reached out to confirm that he does not want his collision to be used as a reason to not support bikeways and the pilot.” Probably an important detail. https://t.co/c1HuWaaXqG (PDF) pic.twitter.com/eD5EyCYdCQ

The fact that a cyclist accident is being used to support the removal of the infrastructure that usually provides safety didn't escape some city hall watchers.

"Arguing that bike lanes should be removed so ambulances can respond more quickly when cyclists get injured is… novel, at least," Matt Elliott tweeted. "You'd think it'd be better to just have infrastructure that prevents cyclist injuries in the first place."

It turns out the cyclist involved in the accident doesn't approve of his story being used. The city notes that "this cyclist has reached out to confirm that he does not want his collision to be used as a reason to not support bikeways and the pilot."

Also EMS said they have been able to arrive at their calls within an acceptable amount of time including by changing their routes when possible and needed.

The campaign against the bike lanes is also promoting green initiatives but is distributing posters on glossy paper.

Some people have found the humour in all this and created a satire page, which supports "cars now cars forever" and suggests they want to "remove human beings from Yonge Street."

The page says the pilot project "makes it too hard for me to drive my SUV" and "My commute is now 7 minutes longer." 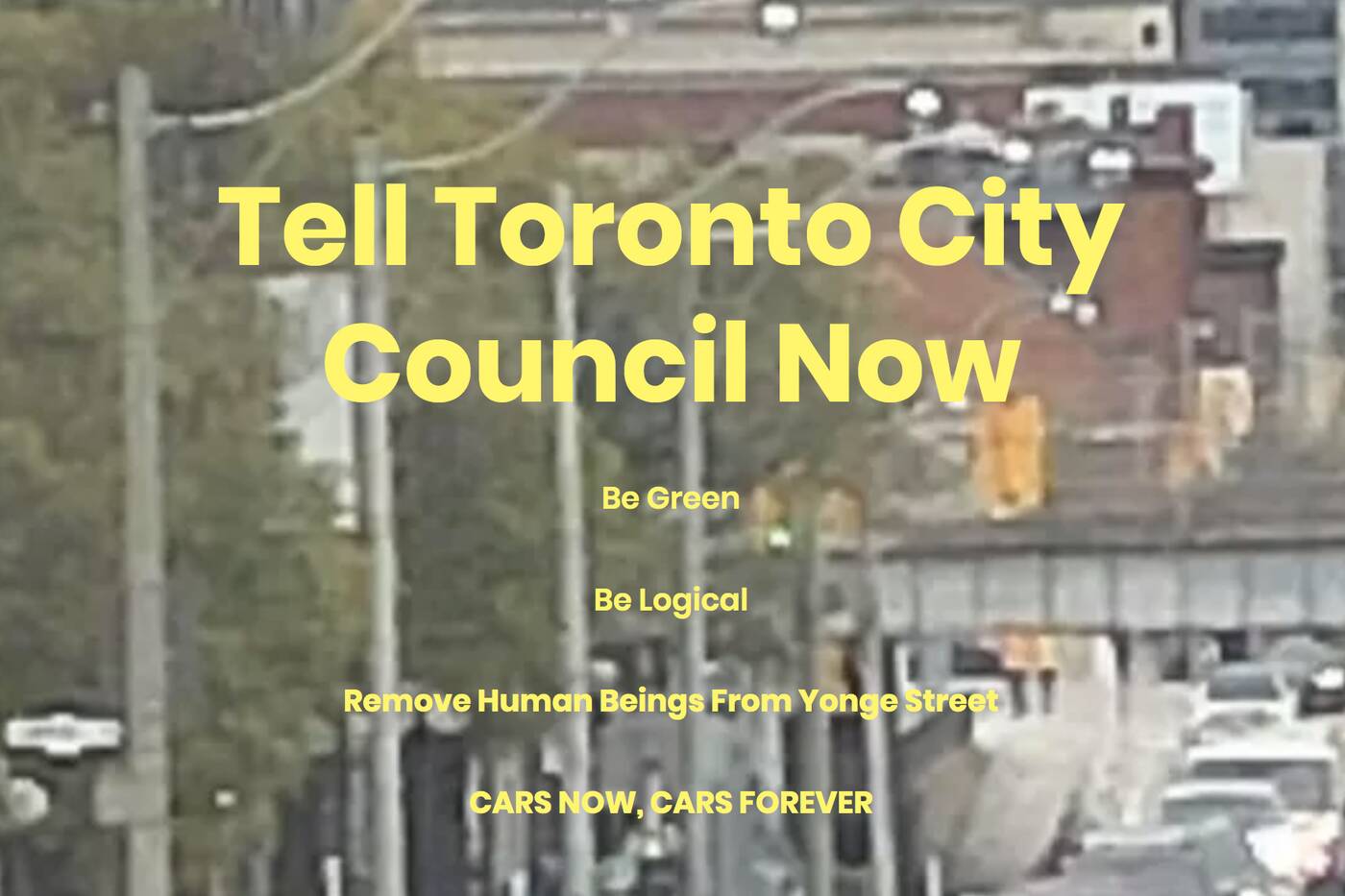 The satire page about the bike lanes is hilarious.

There are many other reasons why people are opposed to the bike lanes, including dangerous sight lines, but the choice to use bike safety and green initiatives is bizarre.