A chunk of Toronto's Gardiner Expressway just disappeared, but it's not the one you're probably thinking of.

The monolithic remnants of the expressway's demolished York-Bay-Yonge off-ramps — a cluster of concrete supports outlining the former spiral ramp — have come down to make way for a quirky heart-shaped park at York Street and Queens Quay.

It is confirmed: the Pillars are gone. Put up a good fight and I won’t stop standing up for a culture that remembers where it comes from. And don’t you think I let them demolish them without grabbing a little piece for safekeeping 😽. Always and forever, #keepthepillarsTO pic.twitter.com/qxuqXHkPvl

Known as Love Park, it seems not quite everyone is in love with the park yet, some seeing the removal of these last vestiges of the lost Gardiner ramp as a missed opportunity to integrate the site's history into the new public space.

The supports, or "bents," were all that remained of a complex of ramps that included a spiral ramp touching down at York Street and a straight ramp extending to Bay Street.

When the spiral ramp came down in spring 2017, the City left the bents in place with the potential to have them integrated into a new park on the ramp's former footprint.

The ferry docks may have changed (this location is now Harbour Square), but we still ride the same ferries.

Also, pre-renovation Toronto Terminal Building, and the former ramp where there will soon be a new park.

No photo on Yom Kippur, but a new roll on Friday! pic.twitter.com/UtcDW61vvf

This vision would not come to pass, despite a grassroots Twitter campaign called #keepthepillarsTO.

Artist, writer, and cartographer Daniel Rotsztain thinks that there was much lost in this decision, telling blogTO, "those pillars were not a testament to the automobile, but a testament to the idea that we can take down highways. They were a piece of our Modernist concrete cultural heritage."

"In an aesthetic sense, this descending spiral of pillars was so unique, and no multimillion dollar public art project could replicate its beauty," says Rotsztain.

A design competition consisting of 40 international landscape architects and designers ultimately resulted in winning a plan that treated the site as a blank canvas. The Gardiner remnants would not be spared.

The winning bid was designed by Claude Cormier + Associés — the same minds behind the wildly popular dog fountain at Berczy Park — in collaboration with gh3.

Waterfront Toronto and the City of Toronto are pledging to create a two-acre urban oasis for the Harbourfront area with the construction of this new park.

The standout feature and namesake of Love Park will be a central heart-shaped water feature surrounded by a pink heart outline. A glowing heart will appear to float above the pond, though it has not yet been described how this mirage would be achieved. 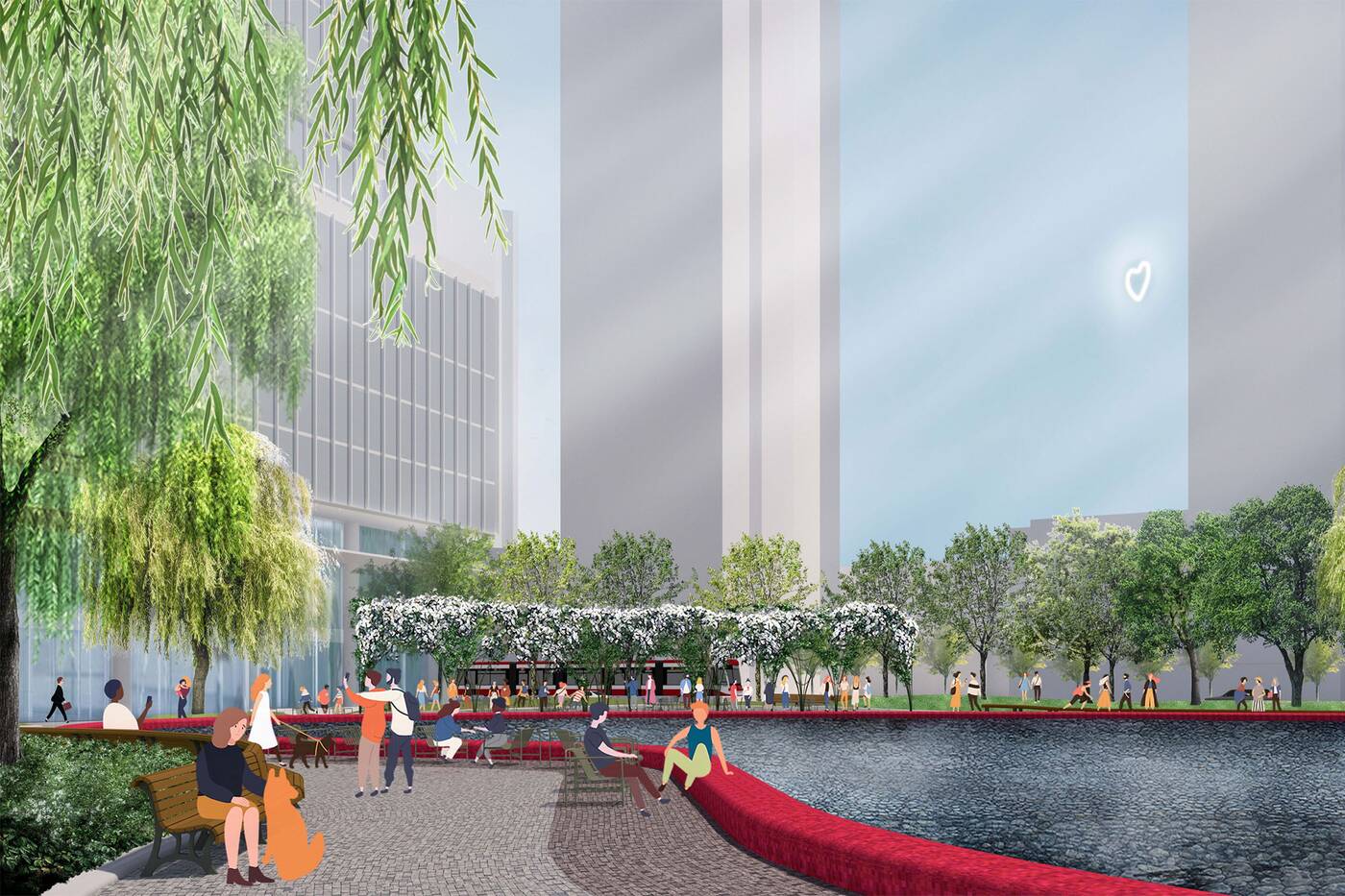 View of the pond and floating heart at Love Park. Rendering courtesy of Waterfront Toronto.

Construction of Love Park began this July when the site was fenced off, cutting off a popular shortcut between Queens Quay and Harbour Street.

Toronto could have this brand new public space within just over a year, with the park's opening currently expected in the fall of 2022.