The courageous Yorkie mix who has made headlines around the world after saving her 10-year-old owner from a coyote attack in Scarborough last week is staying strong throughout what is proving to be a lengthy and difficult recovery.

The tiny six-year-old rescue pup was caught on security cam footage fending off the wild canine, which has been regularly hassling residents of a quiet neighbourhood near St. Clair Ave. E and Warden Ave. in recent days.

After her valiant efforts fighting an animal many times her size, little Macy suffered extensive injuries to her torso and extremities, necessitating surgery and ongoing care at an emergency vet clinic that was expected to potentially cost her owners upwards of $6,000.

A GoFundMe for the cause has now raised more than $35,000 and counting, and Dorothy Kwan — the mother of the youngster who was walking Macy at the time of the incident — has been providing tons of updates for the thousands of people who are now invested in Macy's story. 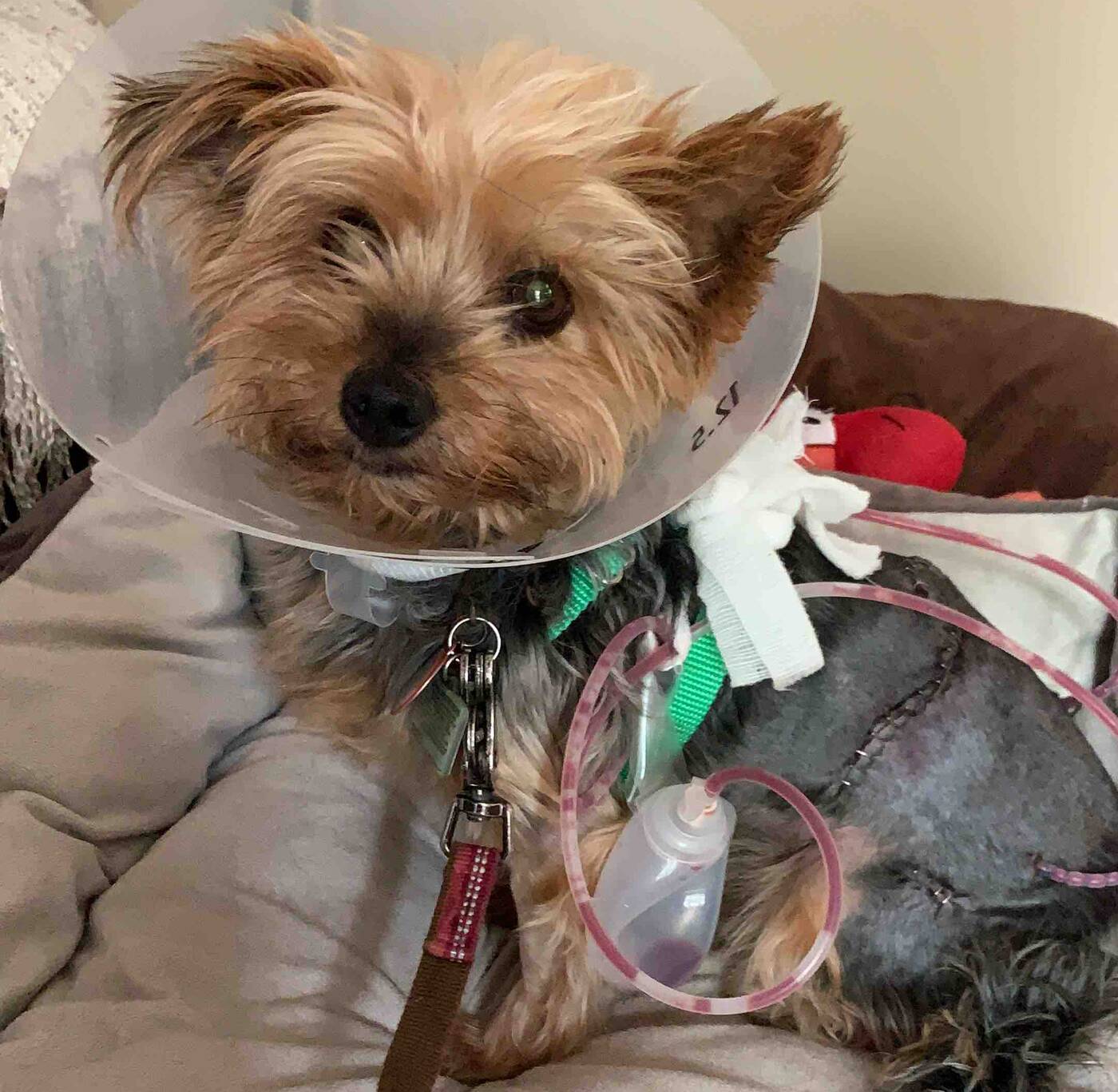 Macy is resting a lot at home now, and has had a mix of good and bad days as she recovers. Photo from the family's GoFundMe.

After surgery on July 20, Macy spent some time in the ICU for "extremely serious tissue injuries to her spine and her leg," Kwan said. She received approximately 40 surgical staples on her tiny body and had drainage tubes installed.

She experienced a concerning fever that emerged post-OR, but it waned and she was finally sent home on July 23.

Kwan reported that Macy was "so excited" to be reuinted with her family and has been settling in well back at home despite her injuries. She continues to be on pain meds and has to be leashed indoors to prevent her from too much physical exertion as she heals, though she tends to rest more often than not.

Despite a few difficult nights and painful days, she continues to guard the house: "She heard a noise this morning and went to the window to investigate," Kwan wrote on Monday. "She's feisty when she's not conked out on her medication and her bark is still very fierce and scary." 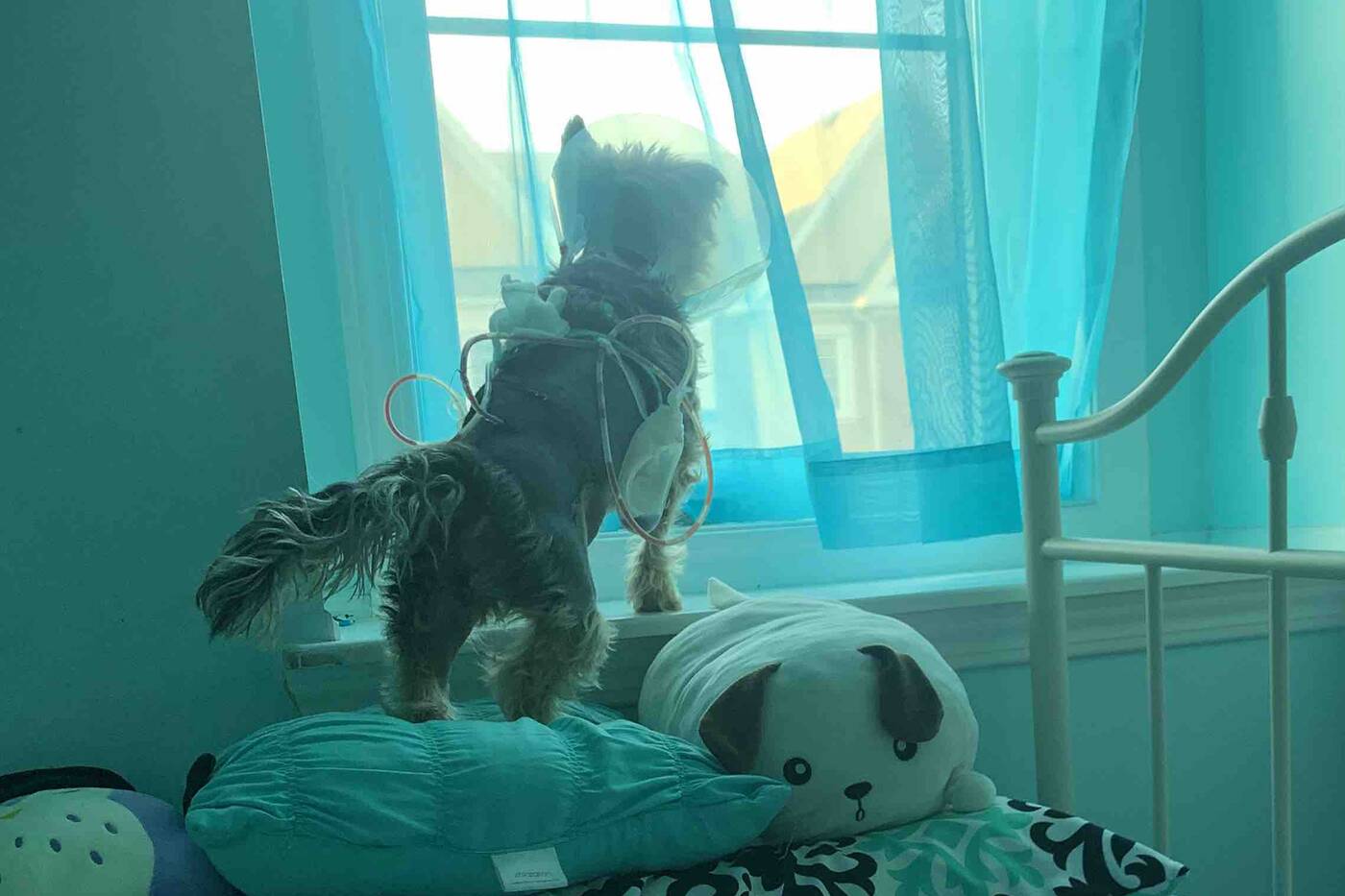 Dorothy Kwan knew her dog was feeling better when she started trying to guard their home again. Photo from the family's GoFundMe.

As of Tuesday, some of her drainage tubes have been removed and follow-up appointments have gone well. She has a "slight fever" and seems sore but is alert and playful, Kwan said, despite her Elizabethan collar.

"Not so easy playing with the cone on her head, but she still manages to have some fun," Kwan said in an update on Tuesday.

Unfortunately, by later in the day, Macy was back at the vet due to "worrisome" fluid from one of her remaining drains and continued vomiting.

"Hoping for the best. Please send prayers to my like fur baby. She's putting up such a brave face," Kwan wrote. 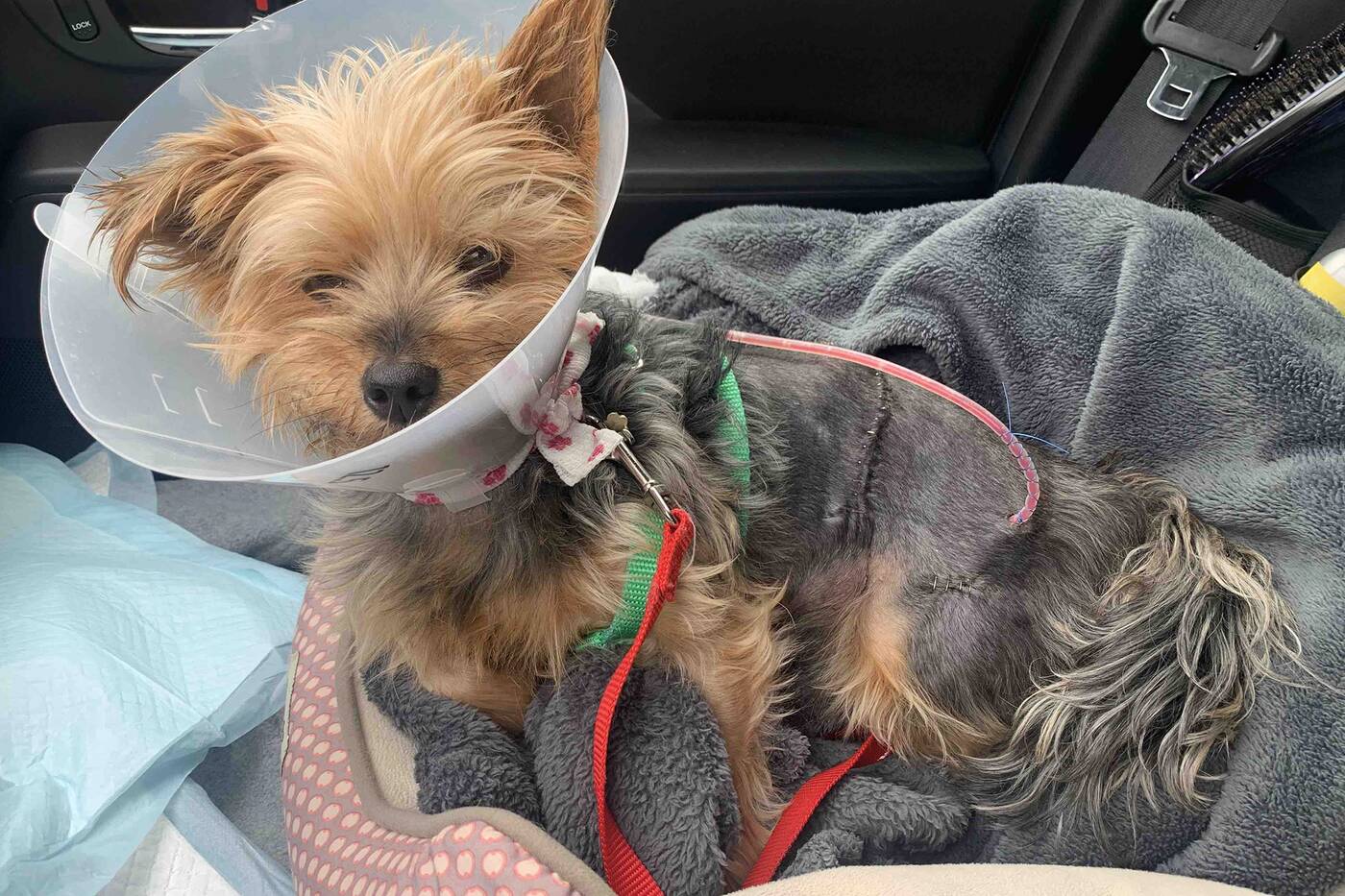 A sleepy Macy on her way to an unexpected vet appointment after some vomiting and concerns about her drainage tubes. Photo from the family's GoFundMe.

As for the coyote, it is still stalking the neigbourhood and continuing to follow, chase and nip at residents. Yet another dog was also pursued and almost bitten by a coyote yesterday, and calls to the city have yielded little result.