The holidays may be over, but we've still yet to see the full effects of people in Ontario gathering with friends and family in recent weeks.

Officials from all levels of government have been asking residents nationwide to limit trips outside of their homes and only interact with those they live with for months now, especially leading up to Christmas and New Year's, when people are known to get together for dinners and other celebrations.

But, it seems that many didn't heed the recommendations — nearly half of Canadians, in fact. 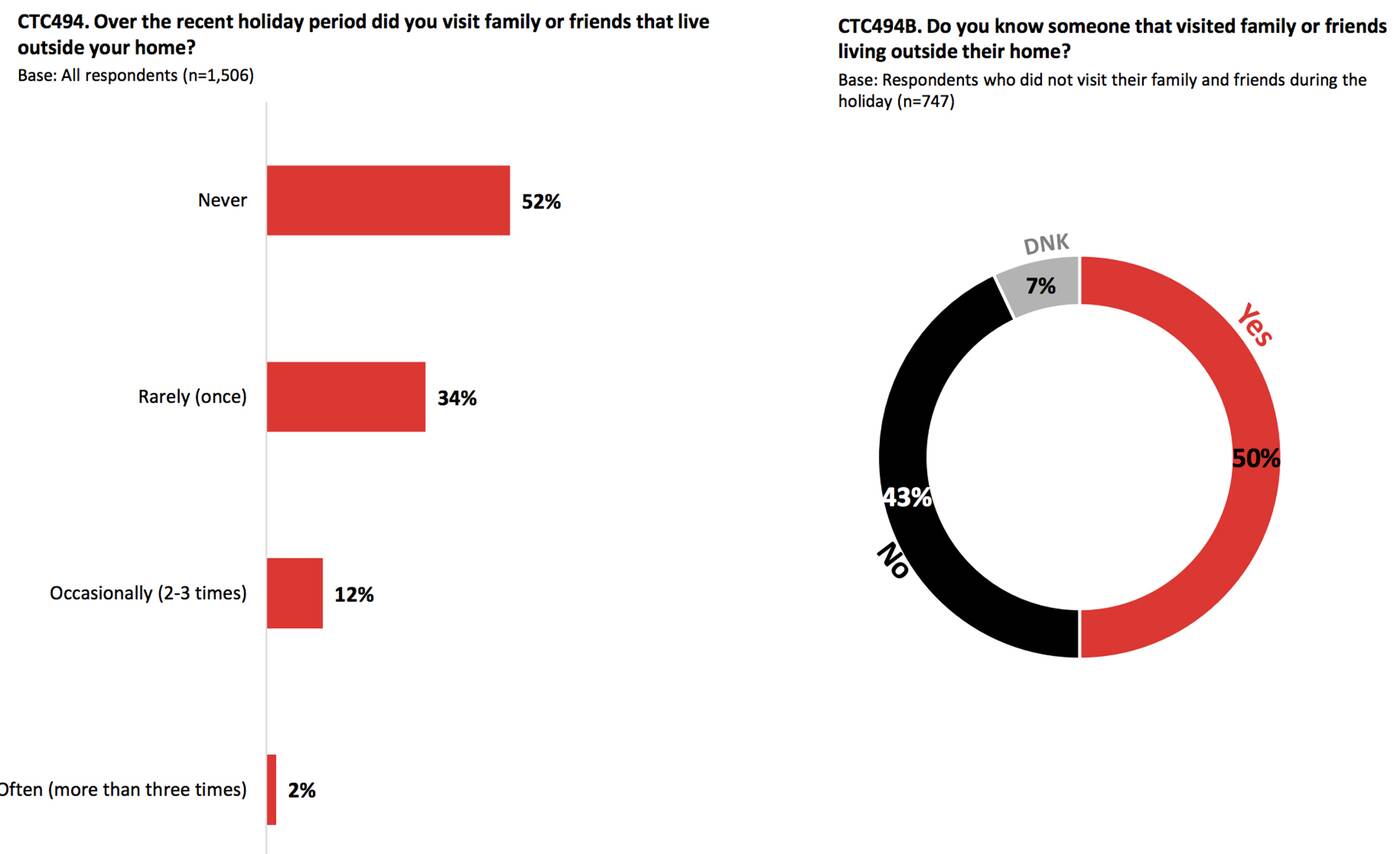 According to a new survey by the Association for Canadian Studies and market research firm Leger, 48 per cent of people nationwide admitted to visiting with other households in the last few weeks.

Exactly half of the 1,506 those polled said they knew of people who gathered with others who live outside their home, while another seven per cent weren't sure if anyone in their circle had partaken in holiday gatherings.

A very small number said they did so three or more times (two per cent of all, 4.2 per cent of those who answered yes).

But, it is worth noting that the sample size was admittedly tiny for a population of over 37 million people, and that the question was pretty vague, and did not specify what type of "visit" the respondent had, and whether it was physically distant, masked, etc.

Agreed. My husband and I did a porch drop-off tour where we stayed outside, 6ft+ apart, no-contact gift drop, and chatted for 10 - 15 min. max. I would count that as "visiting family."

With many residents still embarking on non-essential travel and at least a dozen prominent Canadian politicans themselves ignoring various orders they've given their constituents — boldly vacationing abroad and attending large Christmas dinners — it has been understandably difficult for everyone to want to follow the rules.

The is especially pertinent in places like Toronto, where the strictest form of lockdown has worn on for well over a month now.

Half of Canadians visited family over the holidays, ignoring the advice of political leaders. (Or taking it? We can’t tell.)

Enforcement officials in the nation's most populous city have said that indoor private gatherings, which are completely prohibited, are still an issue, with dozens being busted each week.

Some have simply not been listening to the rules this entire time, while others are perhaps weary of lockdown and willing to take the risk.

Canada as a whole saw 9,761 new cases of the virus in the last 24 hours, while that 85 per cent of all our cases are resolved and our mortality rate sits at 2.6 per cent. A staggering 70 per cent of deaths have been in patients over 80, which may be some indication of why older people are more inclined to stay home.