Toronto is emerging more and more each year as a "leading global city" in the eyes of business leaders worldwide and, based on the results of an important annual outlook for 2020, it will only continue to grow in influence moving forward.

The latest version of A.T. Kearney's annual Global Cities Outlook (GCO) puts Toronto at spot number two out of 151 major cities across all continents, up a whopping nine places since 2019, beaten out only by London (England, not Ontario.)

Released every year in tandem with Kearney's Global Cities Index since 2015, the outlook is described as "a projection of a city's potential based on rate of change in 13 indicators across four dimensions: personal well-being, economics, innovation, and governance."

Not to be confused with the GCI, which identifies current global leaders, The GCO identifies cities on the rise — "those creating the right conditions for future global status," as Kearney puts it.

"This time, London maintained its top ranking, but from there all bets were off. Toronto jumped an impressive 9 places to the number 2 spot, driven by a large upswing in innovation and continued strong governance," reads the report.

"The much more dynamic results of the GCO, in comparison to the GCI, reveal the fierce competition between global cities to advance their future prospects." 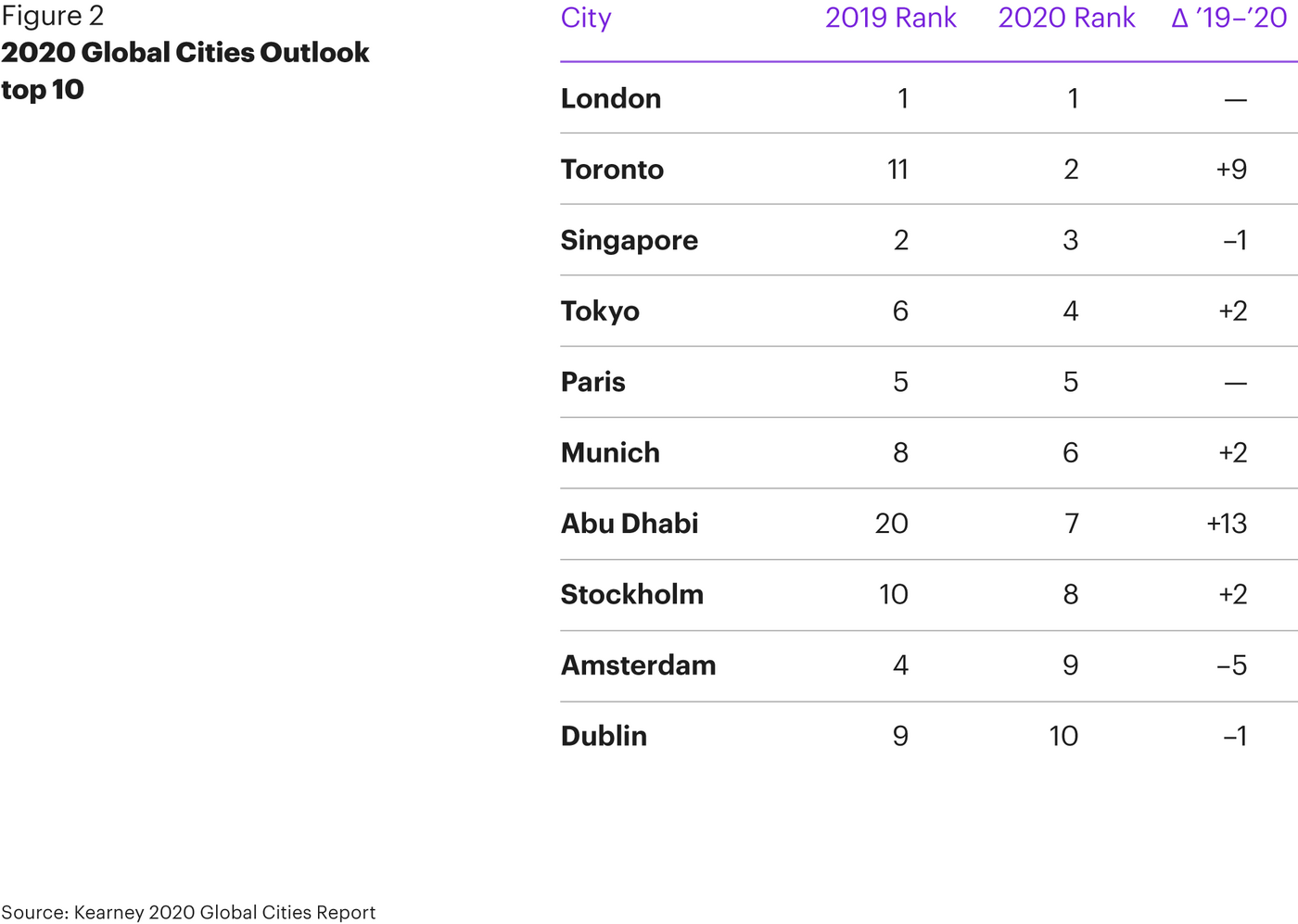 Toronto rose from spot number 11 to second place in this year's annual ranking of important future cities. Image via A. T. Kearney.

Toronto didn't fare quite so well on the index itself, coming in at spot number 19 — down two positions since last year's GCI, which is determined by business activity, human capital, information exchange, cultural experience, and political engagement.

New York, London, Paris and Tokyo maintained the top four spots they've been steadily holding since the index was created (save for one report, in 2017, when London and New York swapped places.)

Beijing, Hong Kong, Los Angeles, Chicago, Singapore and Washington, D.C., round out the top ten on the Global Cities Index for 2020.

While we landed in spot number 19 overall by current barometers, Toronto's number two ranking on the GCO this year is a great sign of things to come post-pandemic.

"The GCO... examines those creating the conditions for future status as major global players," notes the Kearney report.