New modelling data released from the Public Health Agency of Canada on Friday is painting what could be a troubling picture for the nation's COVID-19 situation, showing the potential for 60,000 new cases per day by the end of the year.

Following a brief but welcome lull over the summer months, COVID-19 infection numbers have been rising rapidly in Ontario and the nation as a whole over the past few weeks, with health officials fearing that things will drastically worsen if citizens stop taking health measures seriously.

By the end of this month Canada’s top health officials are expecting the death toll to top 12,000 #cdnpoli pic.twitter.com/6DtIuTKTam

More stringent lockdown measures have been suggested and implemented in certain locales in recent days — including in Toronto and Peel Region, where things are due to tighten up today — and Canada's top experts are imploring residents to heed their advice and limit their social circles and trips outside the home.

"Every effort you can make as an individual matters," the new report reads, warning that the number and size of outbreaks are escalating alongside case numbers and per cent positivity of those tested across the board. 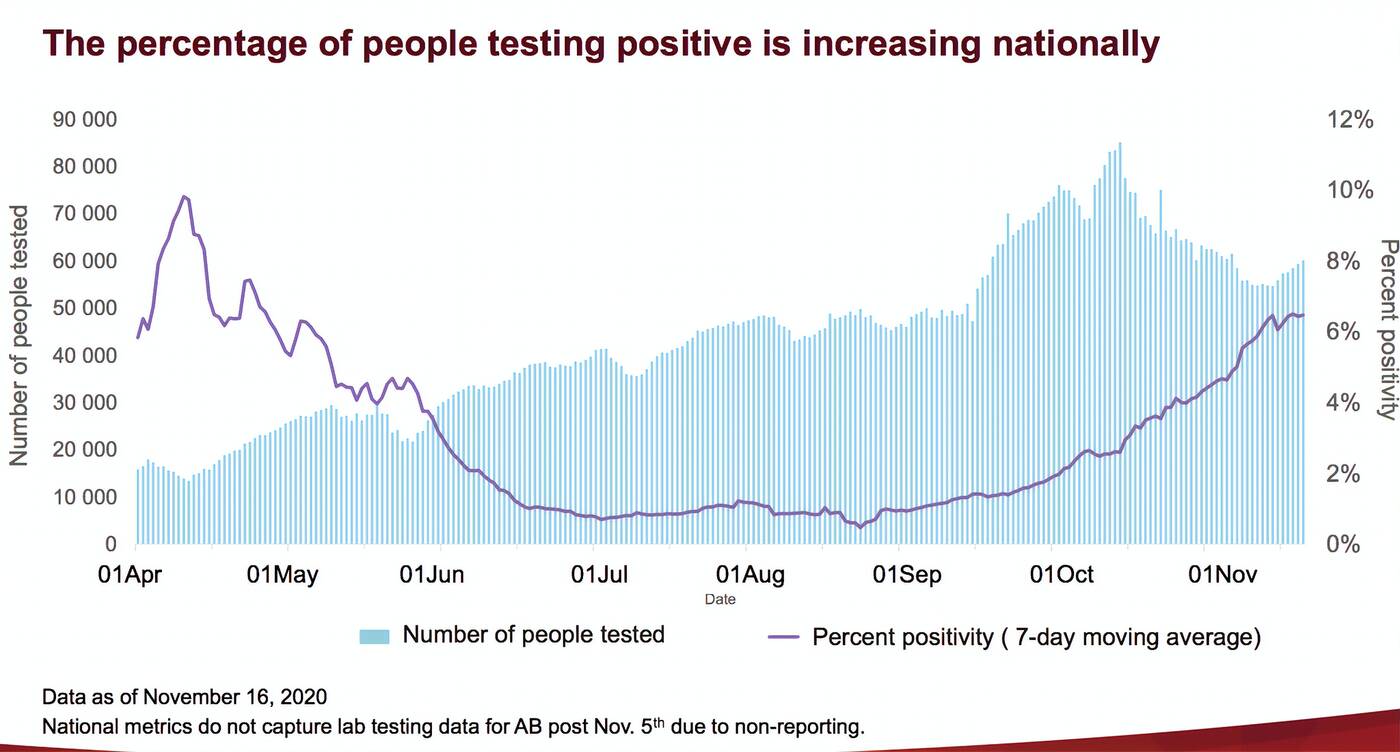 Looking ahead, the data suggests that if the population falls into COVID fatigue and increases their personal interactions and number of contacts — such as by going to family dinners and other gatherings over the holidays — patient numbers will skyrocket to the aforementioned 60,000 per day across Canada by late December.

If we maintain our current levels of socialization, numbers will still rise steadily, sloping up to just over 20,000 by the same time.

And if we go into full-on lockdown, only hanging out with those we live with and only leaving the house for essential trips to get groceries and other necessities, go to medical appointments and exercise, we could see new daily case counts fall below the point they're at now, into the low thousands.

In the coming week and a half, short-term growth of case numbers and deaths is expected, hitting 378,600 patients and 12,120 total fatalities among our population of more than 37.5 million people by Dec. 1. 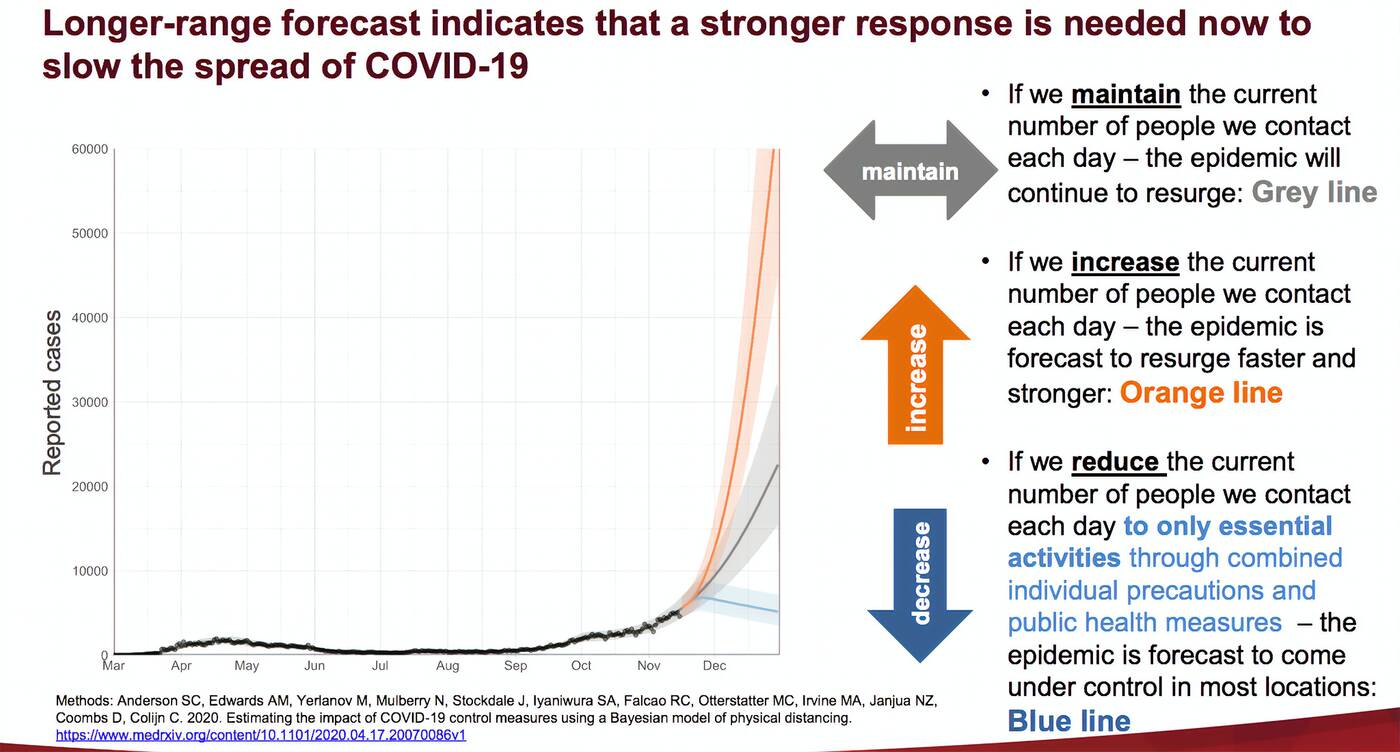 The country reached a grim milestone of 10,000 deaths from the virus at the end of last month, a number that has now reached 11,265 as of Nov. 19. A total of 315,751 Canadians have been diagnosed with the communicable disease since it first arrived in the country in January.

COVID-19 fatalities have been very predominantly in the elderly and immunocompromised — 71 per cent of deaths have been in patients over 80, and another 18.4 per cent in those aged 70-79 — with long-term care homes serving as prime locations for virus spread

Over the past seven days, there has been an average of nearly 5,000 new cases daily nationwide, with Ontario, the most populous province, accounting for more than one fifth of them. Thankfully, recovery rates remain high, around 80 per cent nationwide while the newest cases are still considered ill.

But though Ontario may be the culprit as far as sheer volume of cases is concerned, provinces like Alberta and Manitoba are seeing the fastest and most dramatic spikes in case rates in proportion to their populations, with the latter at more than three times Ontario's figures (though these numbers objectively remain pretty low, in the 100s at worst).

Hospitalization rates are also increasing, for some provinces as bad or worse than the first wave, with B.C.'s being by far the worst right now.

The number of deaths from the virus are likewise steadily rising, albeit at a more gradual pace and lower magnitude than in the first wave. 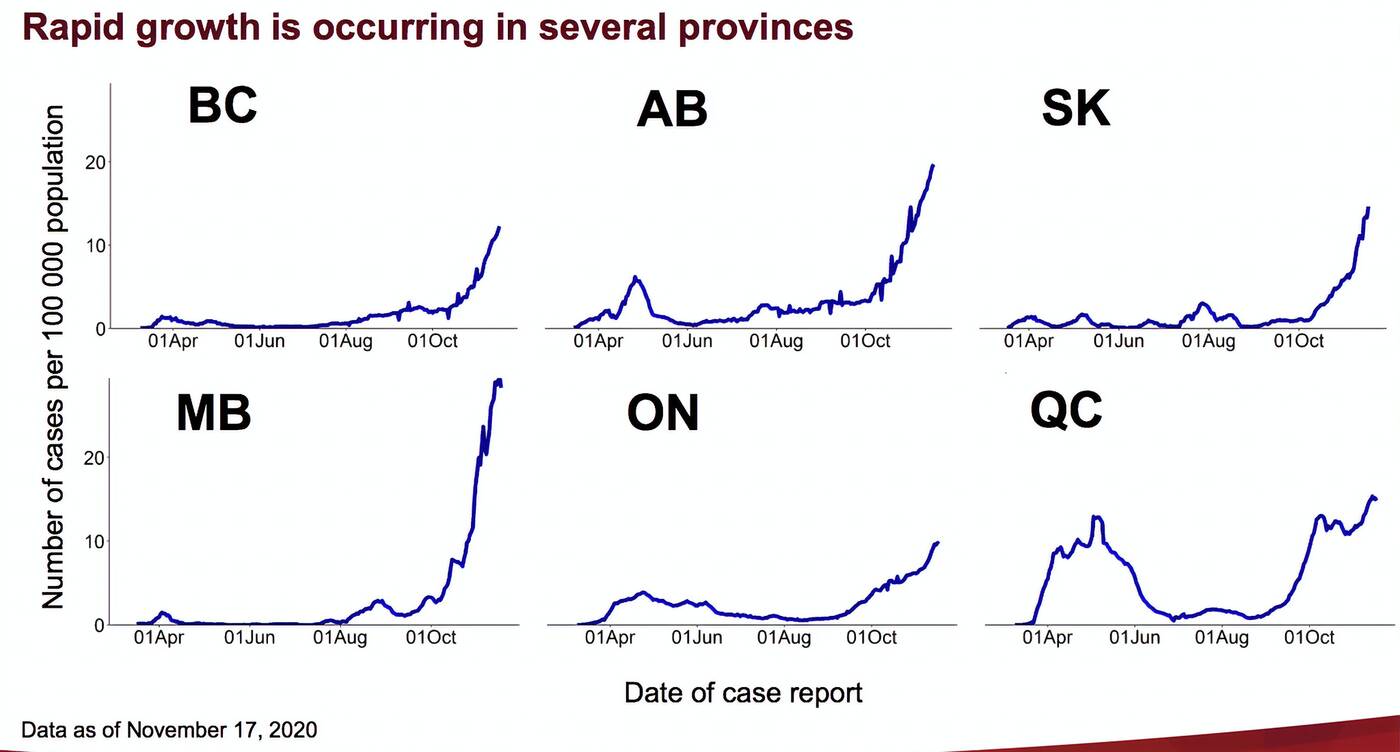 With countless businesses and individuals on the verge of complete financial ruin due to forced shutdowns, as officials around the globe have been recommending for months now, nix the large gatherings, order takeout to support your local restaurants and just stay the hell home.