UPDATE: A City of Toronto representative confirmed late Monday that the man and women pictured were indeed surveyors working for a company contracted by the city to document trail and path conditions.

Today in things you can't expect to do without getting some serious side-eye (at the very least): Film little kids you don't know running around a park in their bathing suits for no apparent reason.

Residents of a Toronto neighbourhood are thoroughly creeped out this week, as word spreads of a man who recently did just that using what looked to some as a stroller-mounted laptop.

A concerned citizen who goes by Tanya Clemens on Facebook posted photos on Thursday of two suspicious people — one man and one woman — she spotted hanging out at Spenvalley Park near Jane and Sheppard late last week.

"These people were observed for about 15 minutes taking pictures of the children in the splash pad and park," wrote Clemens when sharing the photos. "They [did] not have a child with them but were pushing a stroller with a laptop attached to it."

Apparently these two have been caught in June and in July taking pictures of children in splash pad parks, in the Jane Sheppard area. They have no children. Push a stroller w a laptop and camera, claim to be sent from City of TO services but the city denies that claim. BE AWARE. pic.twitter.com/vy6rdMn9Sm

Along with what was thought to be a stroller, the couple is said to have been carrying an iPad that the woman was using to take photos with.

"There was approximately 30 to 40 kids in the park and splash pad at this time as 2 summer camps were there," explained Clemens. "A concerned parent approached them and asked what they were doing in the park with no children and cameras."

Clemens says the woman told parents they were with the City of Toronto and that they were "taking measurements of the ground." The man is said to have come running over, shouting repeatedly at parents that the couple was with the city.

"We asked for them to provide their credentials as we were concerned that they were taking pictures of the children the splash pad," said Clemens.

Suspicious behaviour — especially given that city officials later confirmed they hadn't sent anyone to take measurements at Spenvalley Park. 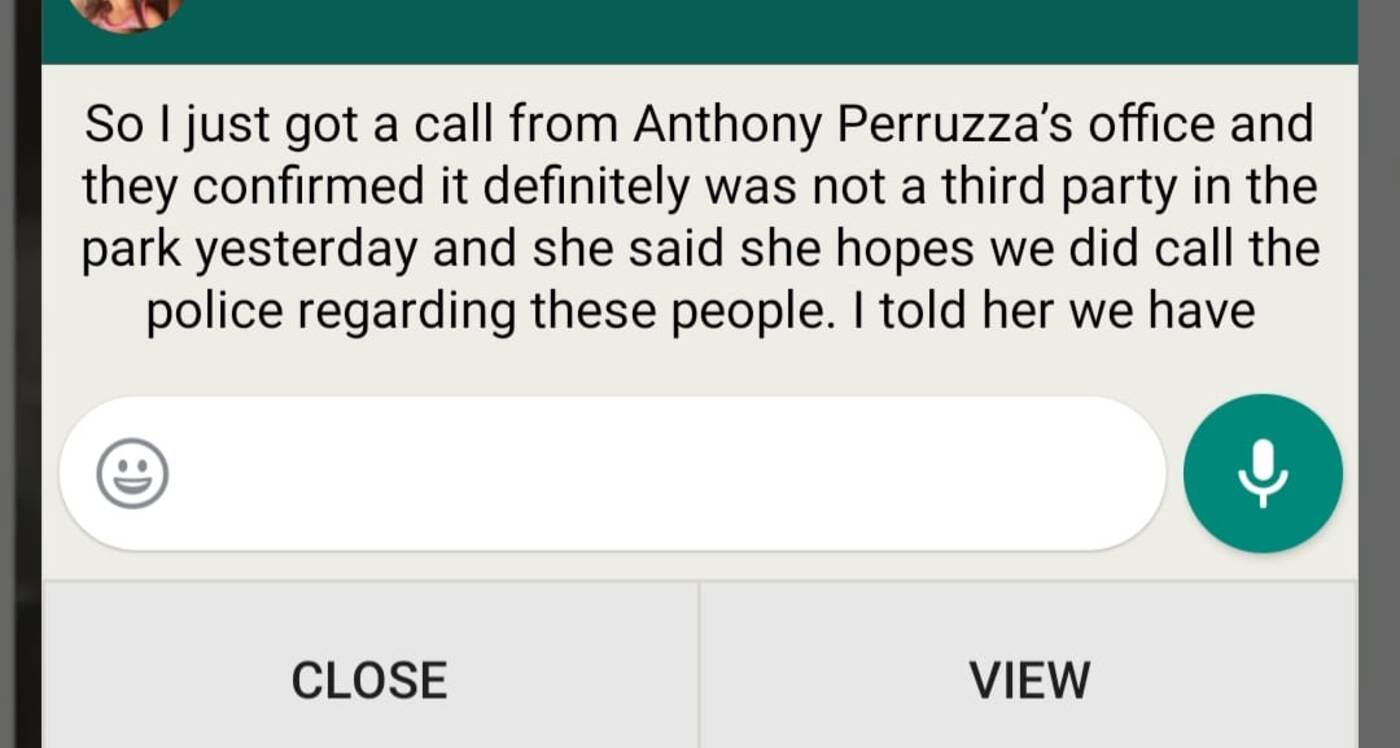 Original poster Tanya Clemens shared this image of a text message she received in the comment section of her post about two suspicious adults at Spenvalley Park. Image via Tanya Clemens in the Jane Sheppard Community Facebook Group.

Clemens also said in her post that two people matching the description of the individuals she saw in the park on Thursday were observed doing the same thing near the end of June.

"Please keep your eyes open," she warned members of the Jane and Sheppard Community Facebook group. "Police have been alerted."