Regent Park has seen a lot of change over the past decade thanks to major investments by the city, private corporations, and citizens of Toronto.

From public housing development to thriving, multi-use, mixed-income success story, we’re starting to get a clear picture of the neighbourhood’s new vibe after almost 20 years of revitalization efforts.

It’s a very impressive picture, and it's been attracting awards and attention from far beyond the city’s borders.

Does all the hype warrant a cutesy, hashtaggable nickname for Regent Park? Like Blansdowne or Roncy or Av & Dav?

Probably not, but a local developer has come up with a pretty good one if residents are so inclined to use it: DuEast.

Currently in pre-construction, the condos are being built by The Daniels Corporation, one of the neighbourhood’s most accomplished revitalization developers.

The buildings will be located Dundas and Sumach St, right in the heart of Regent Park, just steps away from the new Regent Park Aquatic Centre and Regent Park Athletic Grounds. Sales on the condos, which range from studio-sized to 3 bedroom suites, are slated to start this fall.

“Why DuEast?” reads a realtor's website for prospective buyers, pointing to the neighbourhood’s sustainability, lush green spaces, and “array of cultural events.”

“At this condo project development you will not only find a home,” the site reads. “You’ll find a community where you can truly love where you live. 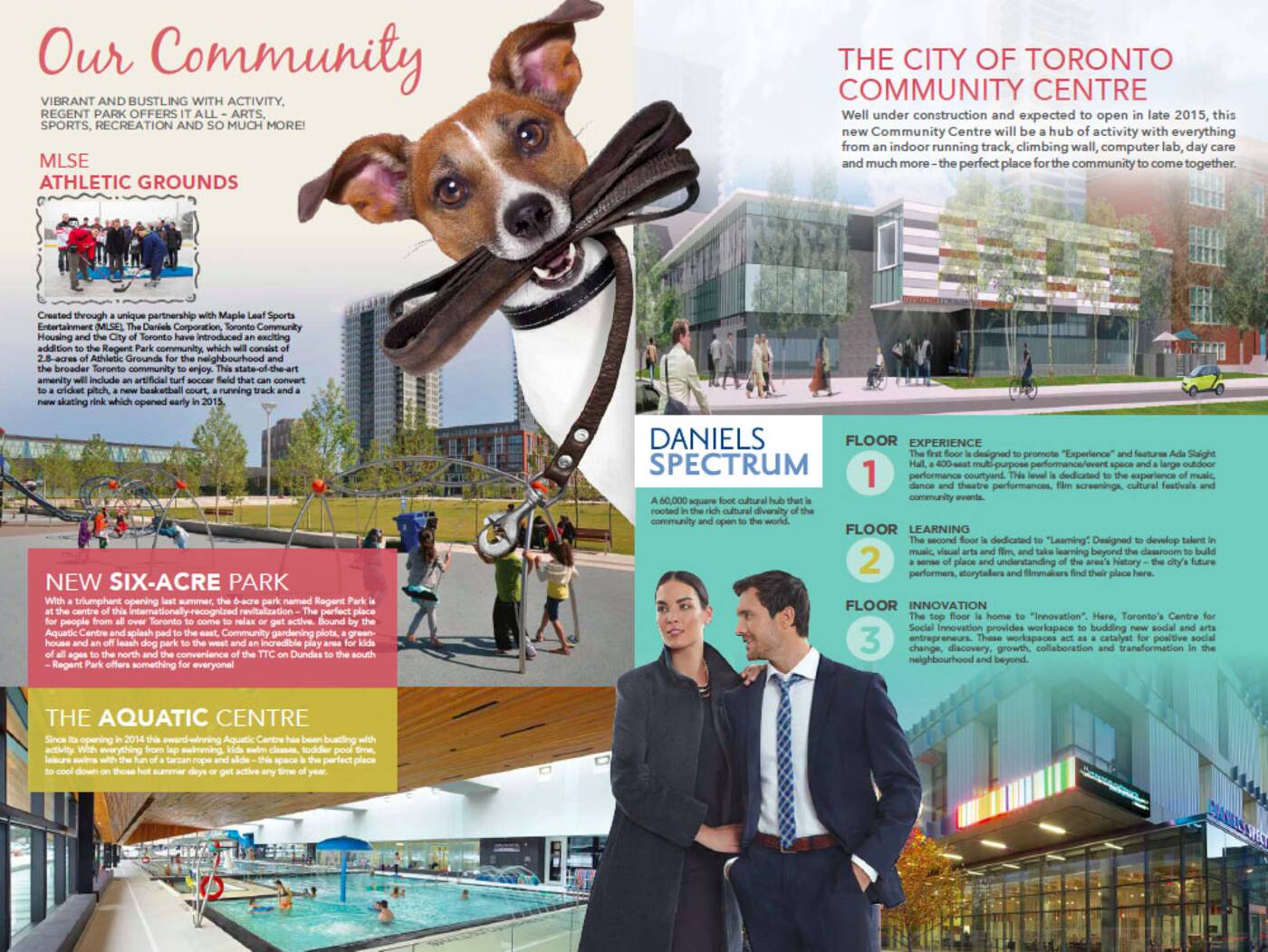 Marketing materials for the new DuEast condo development bill the neighbourhood as a 'vibrant and bustling' community. Photo by The Daniels Corporation.

While “DuEast” as a nickname is pretty much just “DuWest” but for opposite side of Dundas, the two neighbourhoods have little else in common.

Dundas West is known for its sexy dive bars, hot restaurants and vintage boutiques. DuEast, on the other hand, appears to be more along the lines of other newly-developed, condo-heavy hoods like Liberty Village or King West, where you can find almost anything you need within minutes of home.

This DuEast website (not the official one) boasts that its condos will be located within “steps” of a Loblaw’s, Shopper’s Drug Mart, Rogers, RBC, Tim Horton’s and also more “eclectic” local businesses like Sumach Espresso and Paintbox Bistro.

The Regent Park community is referenced in the marketing materials but nobody seems to be suggesting that the neighbourhood should or will be renamed.

Still, “DuEast” sounds like the kind of name that could stick, whether intentional or not. Stranger things have happened.

We love #RegentPark and we are positive you will too! Register today to find out how you can call Regent home: https://t.co/YCNdetDet1 pic.twitter.com/VHqpWR1BHn