10 Toronto intersections as they were in the 1960s

As cliche as it is to say, it's remarkable to see how much and how little Toronto has changed over the last 50 or so years. For the purpose of comparison, nothing beats looking at intersections, which always hint at their former state no matter how much their surroundings have been altered.

Here are 10 Toronto intersections as they were in the 1960s. 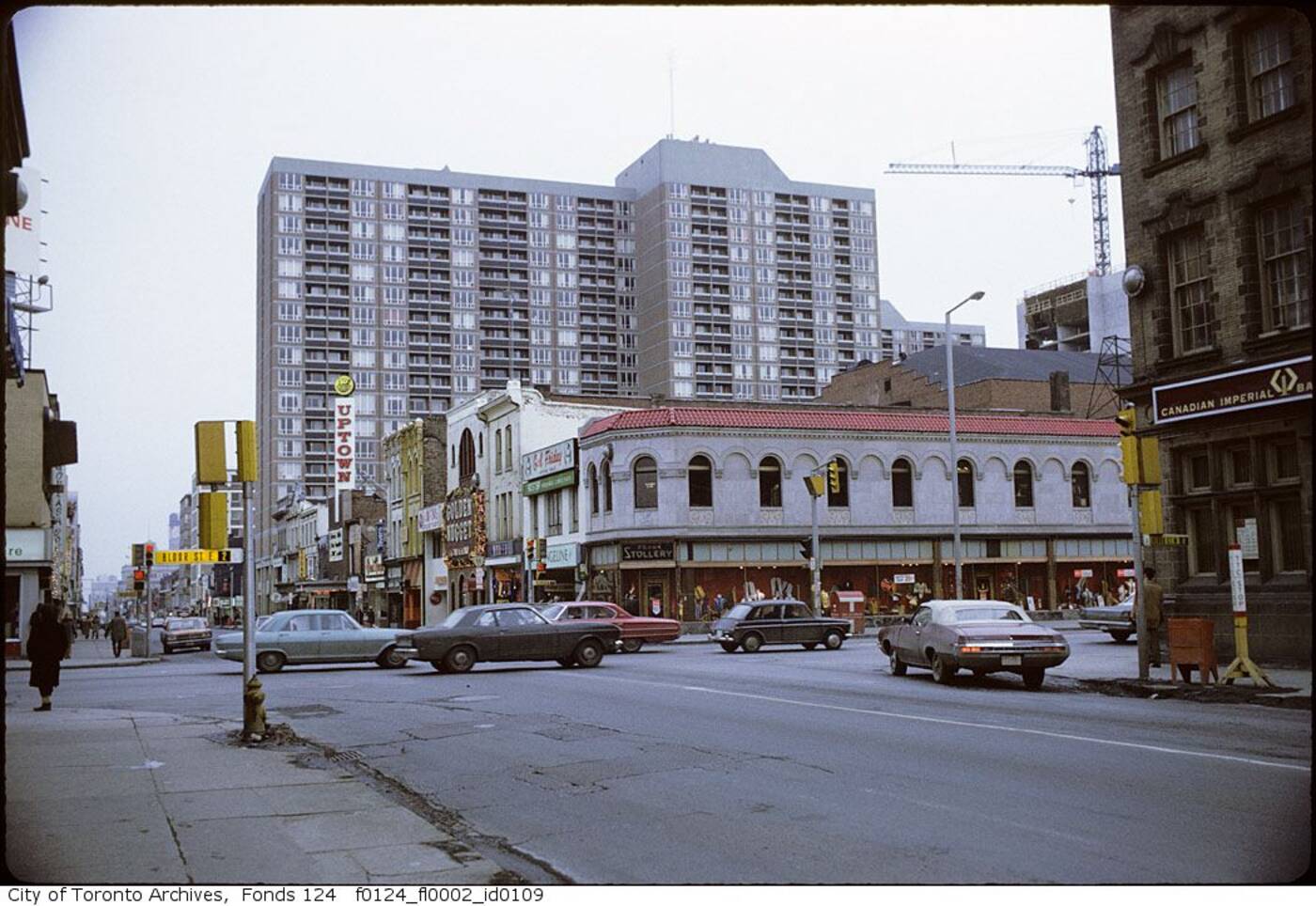 Not much remains of the buildings in this photo from the late 1960s, save for the apartment slab and row of stores across from Hayden St. These too will soon be obscured by a massive condo on the southwest corner. Have a look at the contemporary view here. 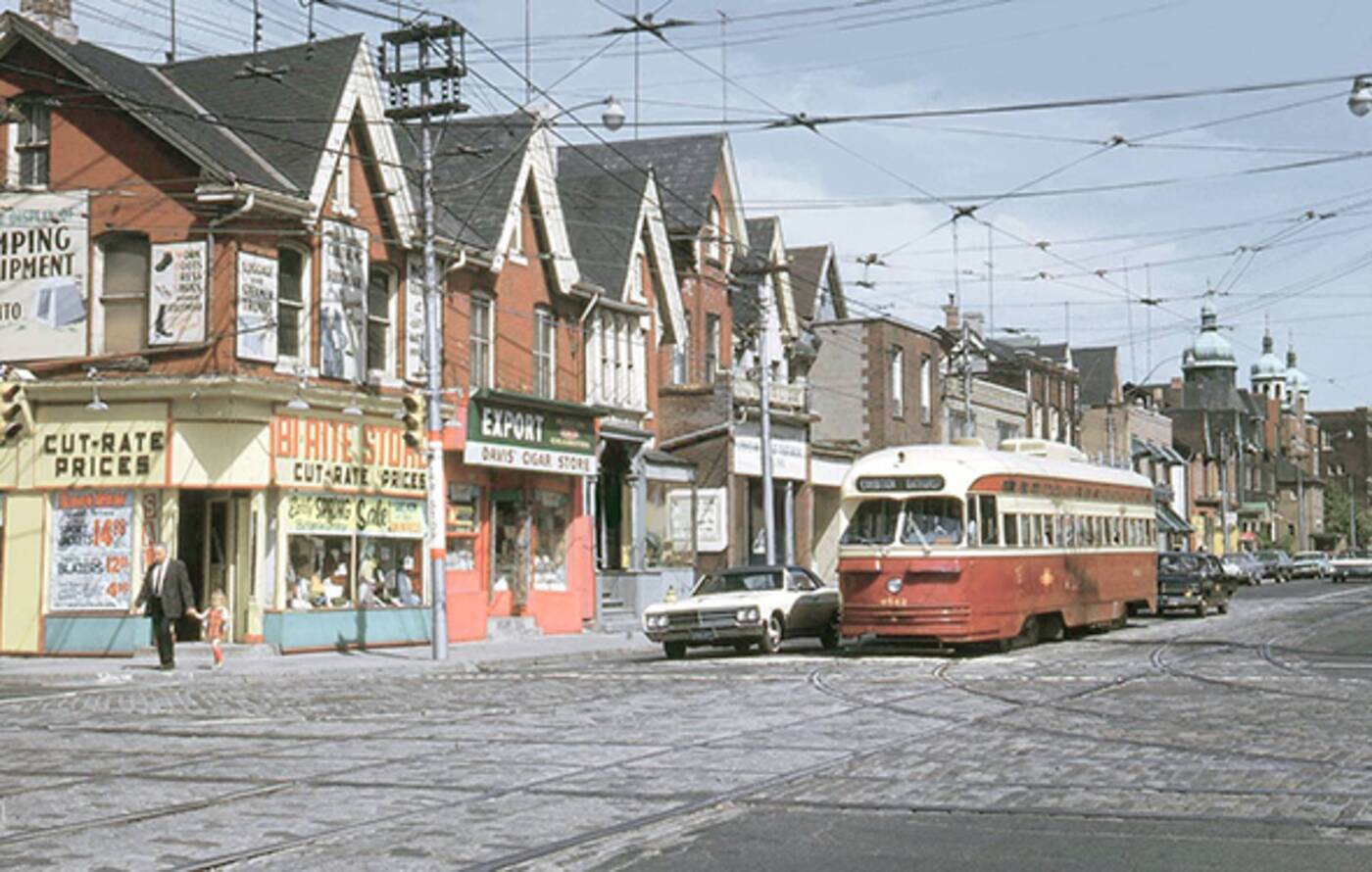 Here you're looking northwest up Bathurst St. On the corner today is a Tim Hortons, but a number of the houses and buildings in the background are still there today. This is the present day view. 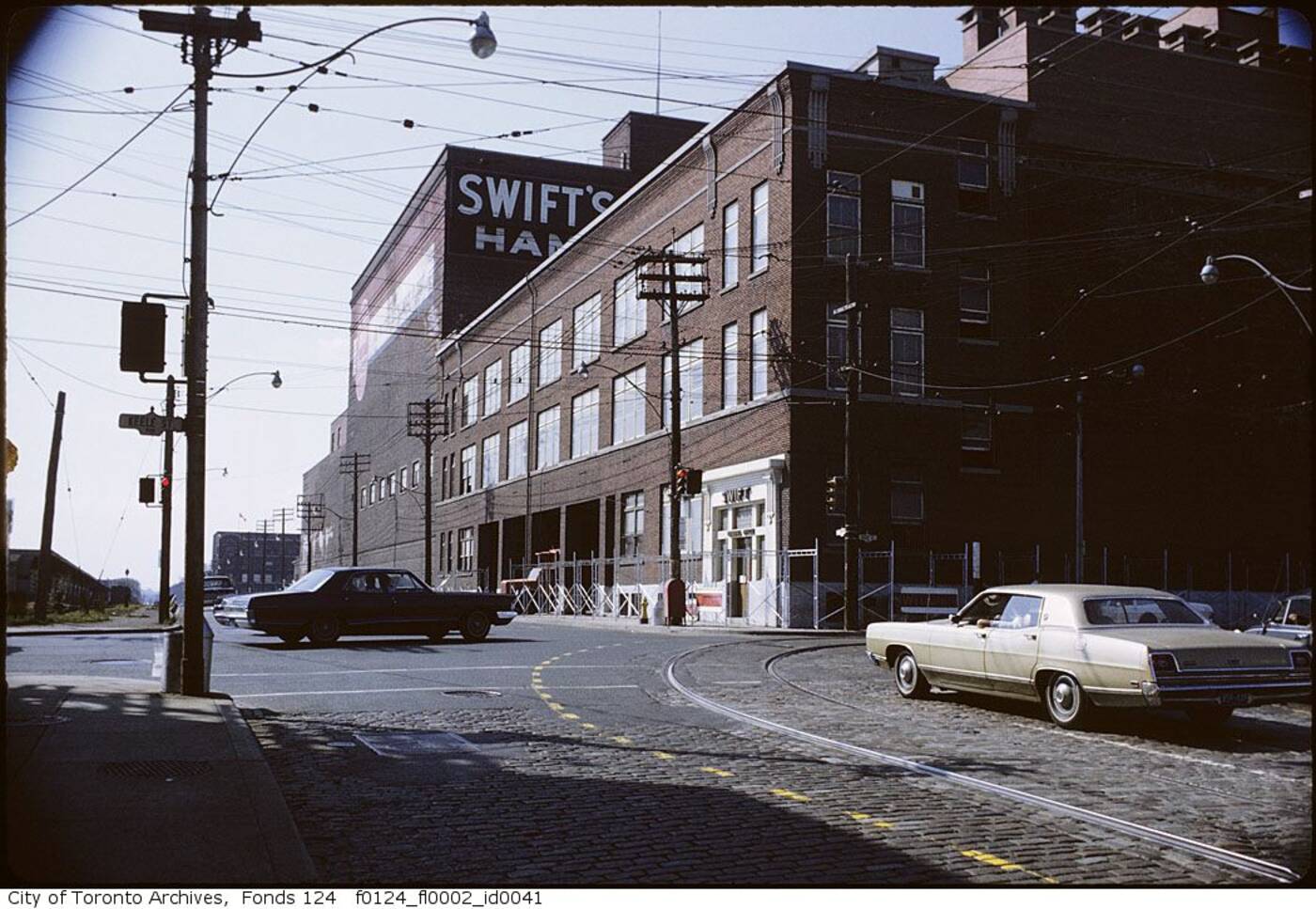 Remember when the northern Junction was one of Toronto's major industrial areas? On the northwest corner we see the Swift's Packers plant, which would eventually give way to the Bunge complex before becoming the Stockyards shopping centre. Here's the view today. 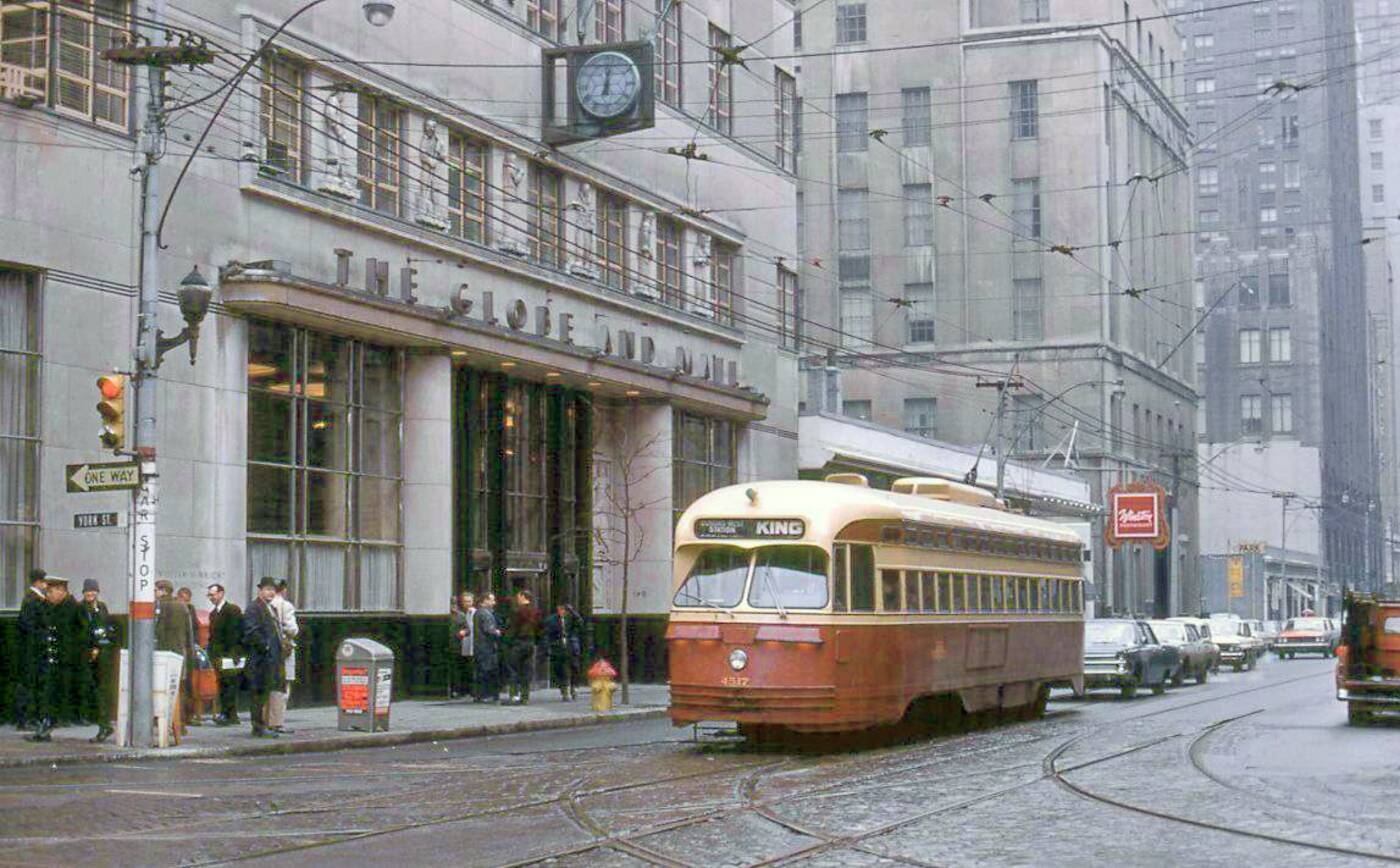 We're looking at the northeast corner of King and York streets, which was home to the Globe and Mail between 1937/8-1974. In the distance, you can also see the old Toronto Star Building. The intersection looks entirely different today. 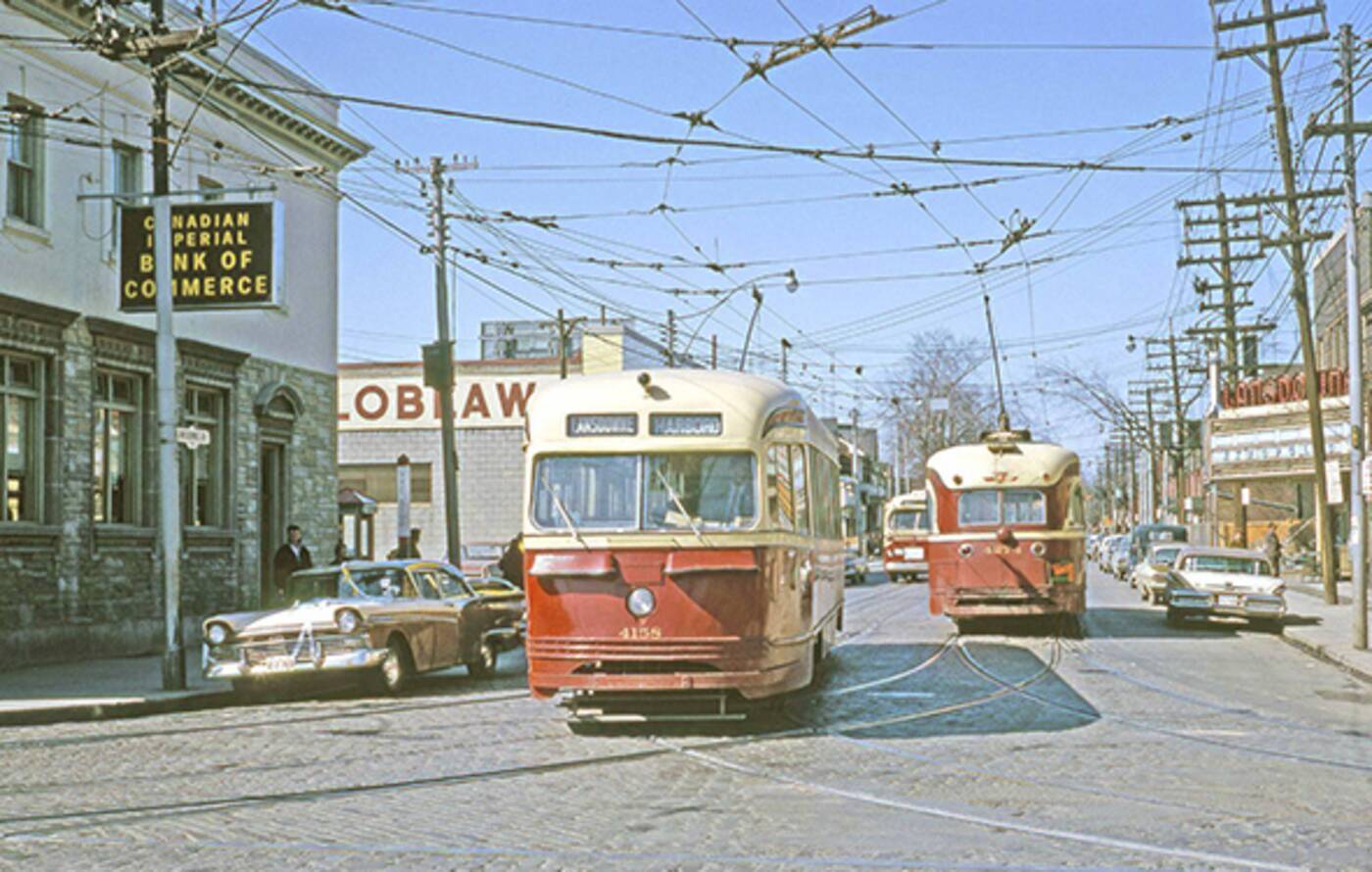 Here's one that looks somewhat similar, minus the streetcars and the brick street. The Loblaws is now a discount shop and the movie theatre is the Toronto Coffee Compnay, but the buildings to the right still remain. This is the approximate view today. 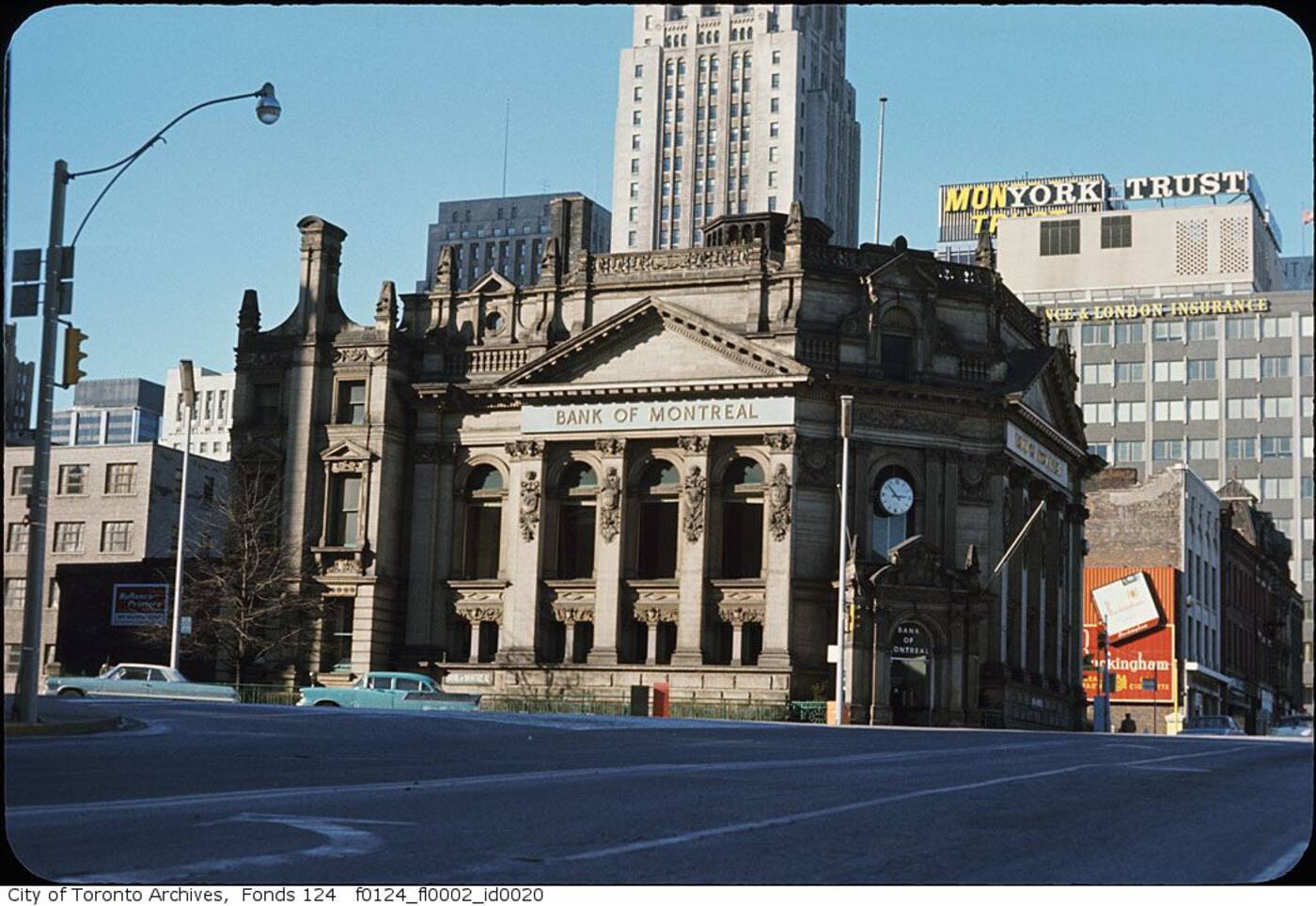 Recognize that stately old building at the centre of the frame. Yes, it's now the Hockey Hall of Fame. This view today remains intriguingly consistent, save for the towers in the background. This is what the intersection looks like today. 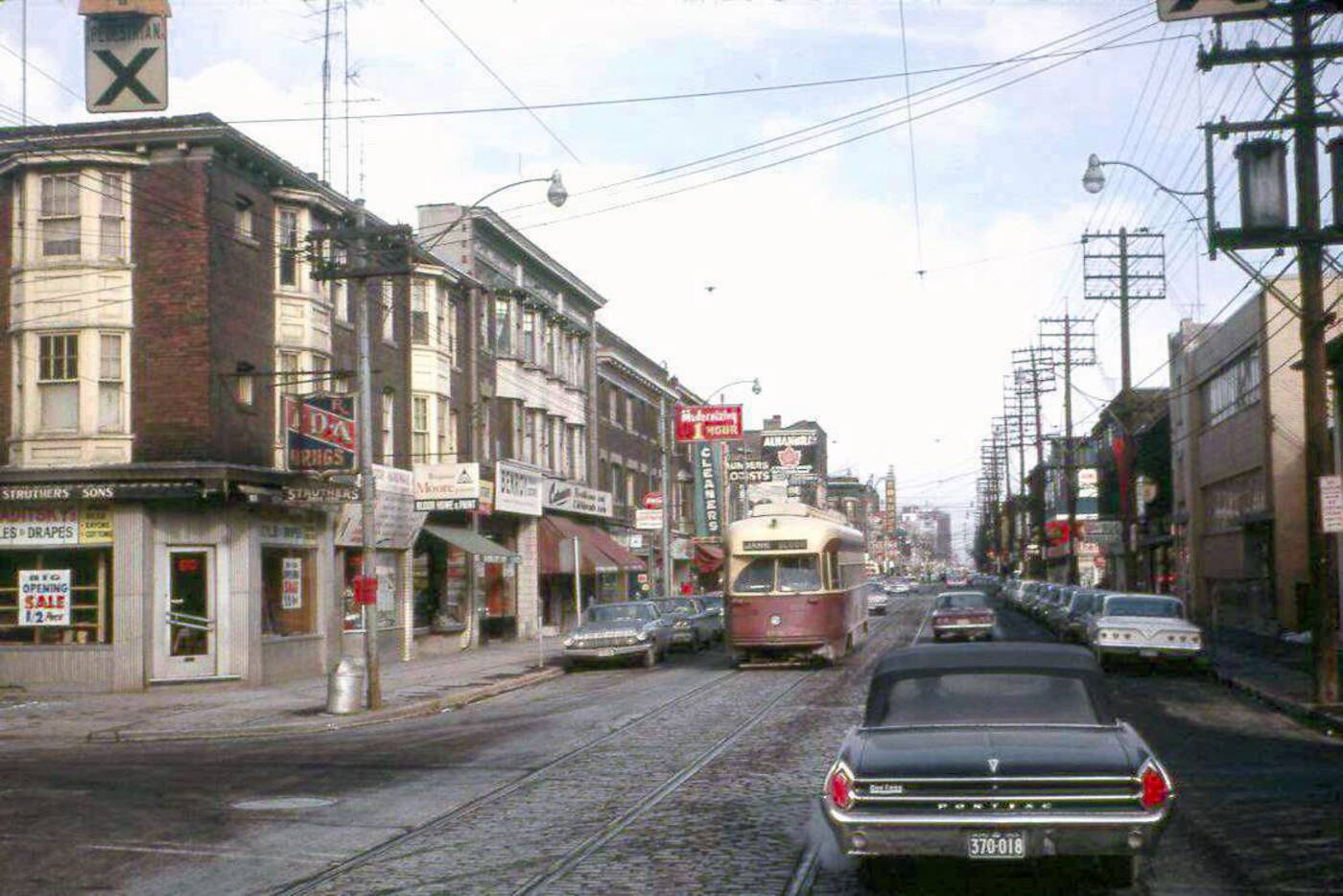 The character of Bloor St. has remained remarkably consistent through this stretch over the last 50 years, which is about to change with the redevelopment of Mirvish Village on the south side. Love that black Pontiac. Here's the view today. 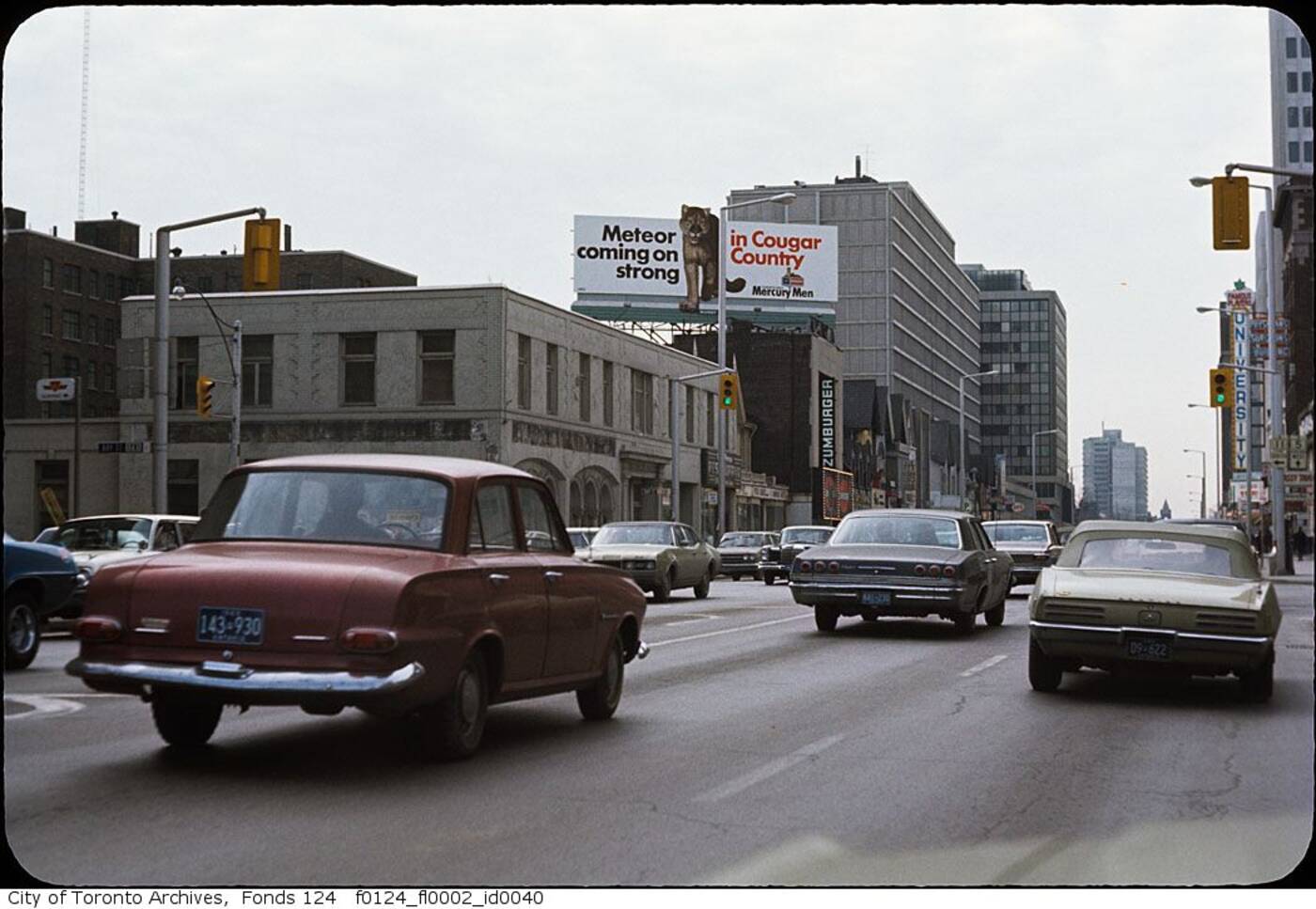 This photo was taken shortly after the opening of the Bloor-Danforth subway, so the streetcars are gone. You can see the old University Theatre on the right and a few taller buildings on the left that remain. The scene has been greatly filled in today. 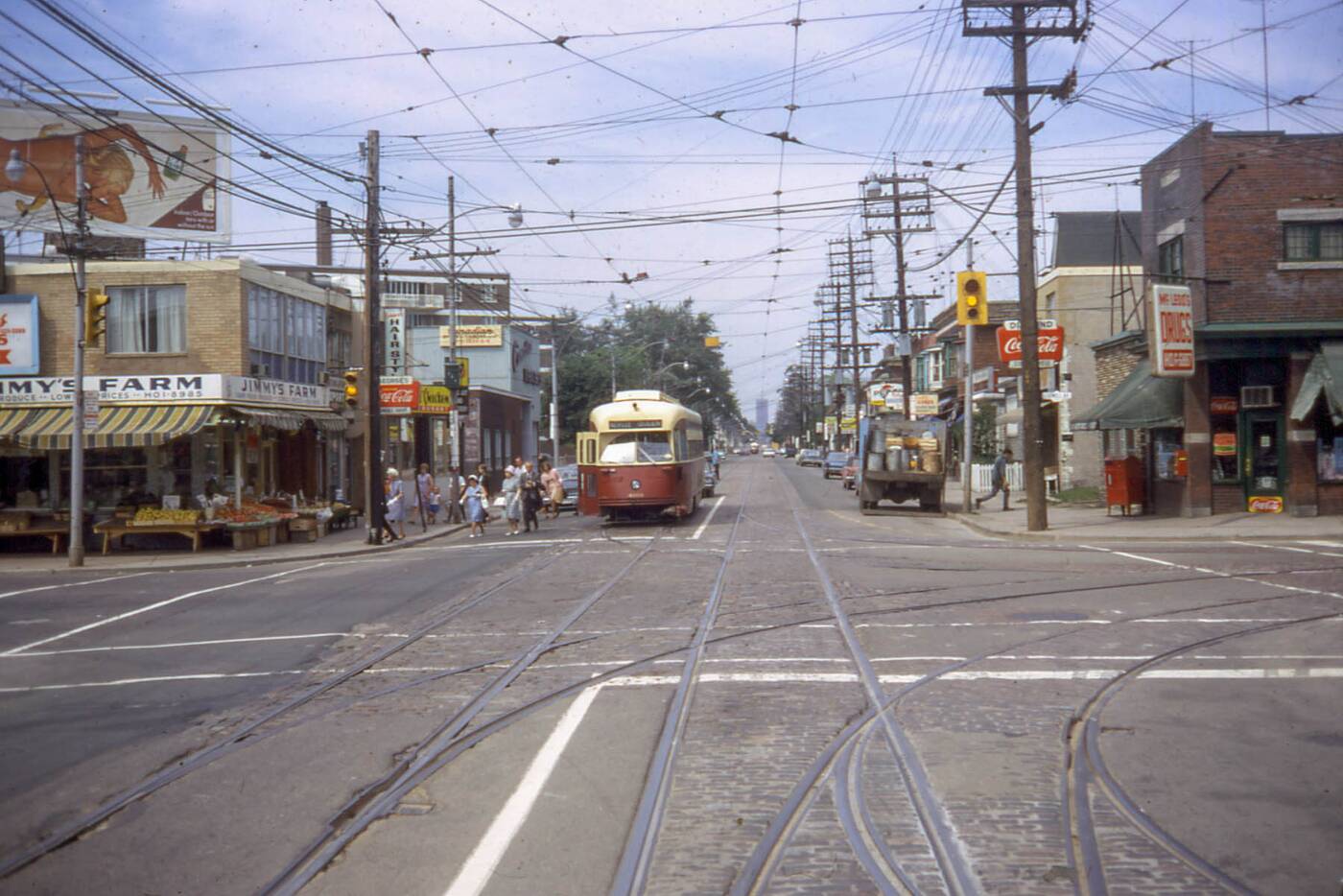 The signage might not be as quaint and the streets have been re-paved, but the main elements in this scene remain remarkably similar between the 1960s and today. Here's the present day view. 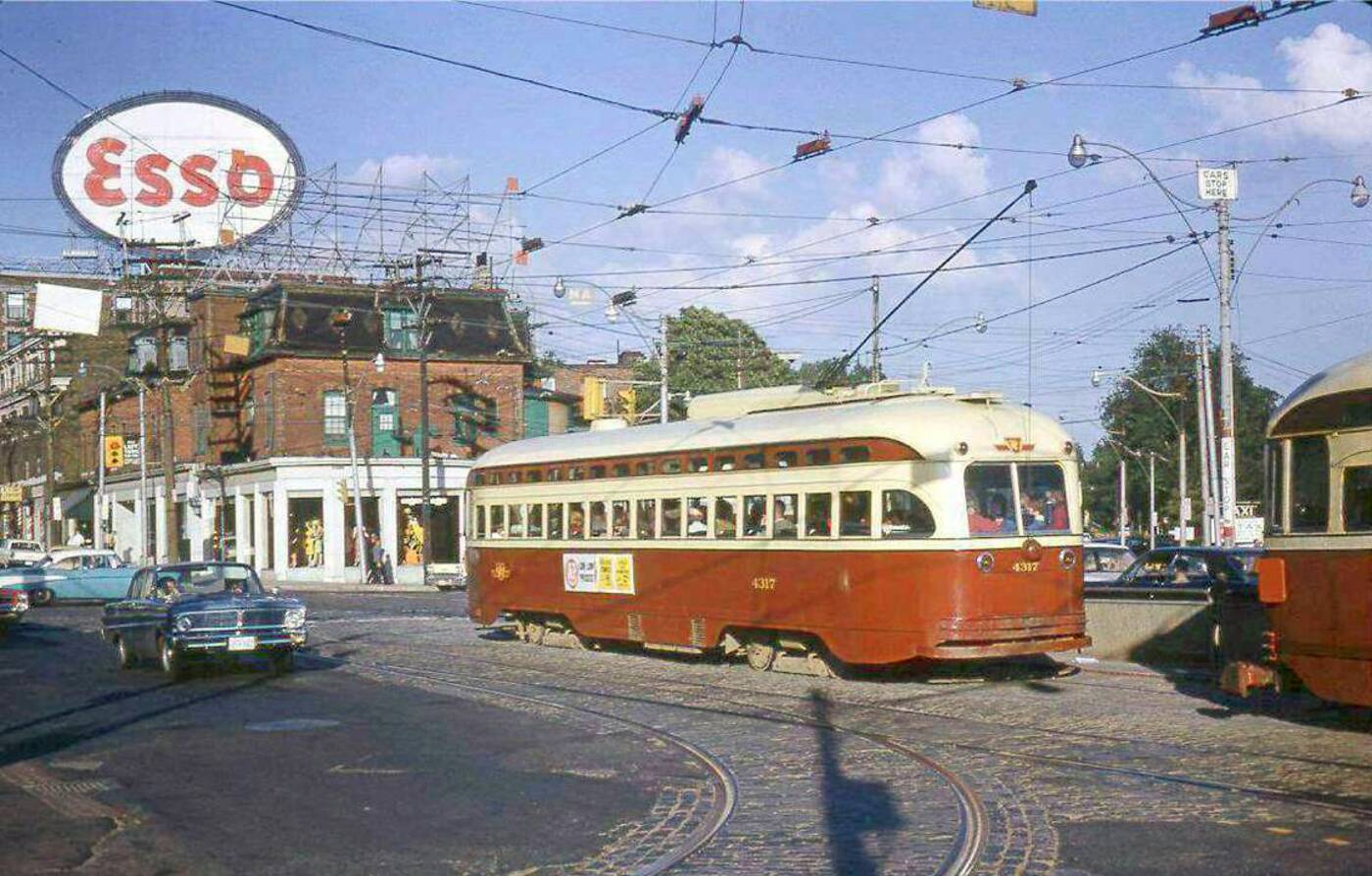 From this angle, the foot of Roncesvalles looks very much the same as it did some 50 years ago. We don't make signs quite like that Esso one today and the guardrail between the two streetcars is gone, but the rest of the scene is intact. Here's the contemporary view.