New condos and retail bring big changes to the Junction

Just over six years ago, Toronto's Junction neighbourhood got its first Starbucks location. At the time, it seemed like a relatively big deal. This was a quiet west side neighbourhood best known for banning the sale of alcohol for most of the 20th century.

Starbucks' arrival in late 2010 marked a turning point in the long term gentrification of the neighbourhood. Did anybody know how much would change in the six years that followed?

Plans for the sprawling Heintzman Place Condos were already in the works when the Seattle-based coffee chain set up at Dundas and Quebec streets, but it's taken a few years for the retail scene to catch up with the influx of residents in the Junction. 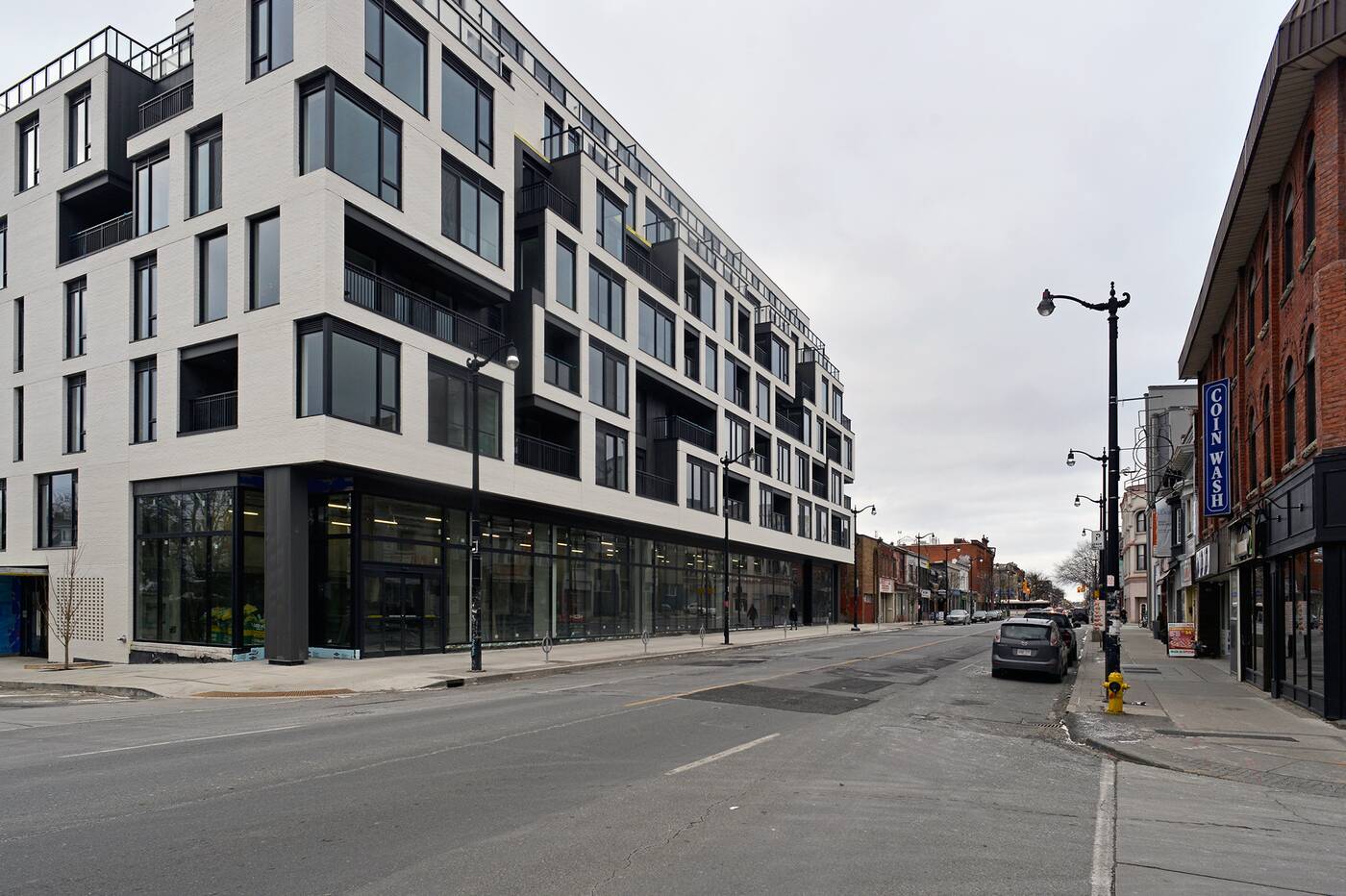 Symbolism aside, one coffee shop doesn't actually represent a huge transformation. It tends to respond to one already in the works.

In the years that followed, the Junction witnessed the steady loss of mom and pop vintage design shops, a steady rise in corporate retail, the continued slow erosion of the area's industrial presence, and the arrival of street-facing condos on the neighbourhood's main streets.

While Heinztman Place has always felt slightly removed from the neighbourhood even as it hovers over it, the nearly finished DuKe Condos make a rather loud case that the Junction has become a chic destination for young professionals, even if its neighbouring storefronts seem like relics from the past. 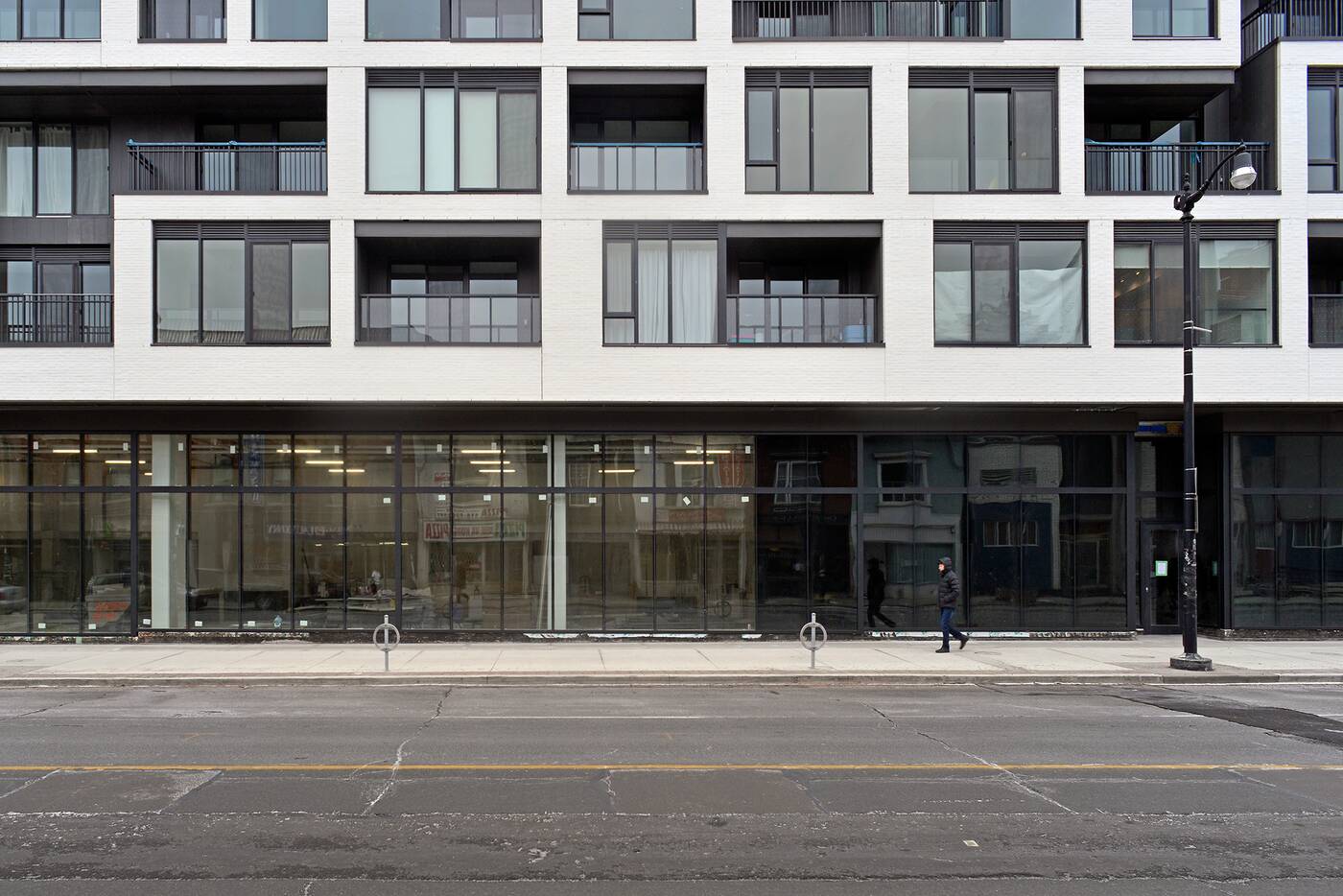 This is a good looking building that's been designed with enough restraint so as not to dominate the entire streetscape. As you walk by, its ground-level glass walls reflect the facades of the hundred year old buildings across the street in a sort of trompe l'oeil effect that reminds you where you are.

It's still the Junction, just a more polished version of the place. These are the type of condos that actually benefit neighbourhoods from a design sense by maintaining retail and enlivening the street, but they also contribute to rising rental rates and decreased affordability.

Further west, the recently restored Campbell Block might be the poster child for this process, as its upper floors await the finishing touches on luxury rental apartments that will attract a more wealthy set of tenants than those who occupied the place when it look dilapidated. 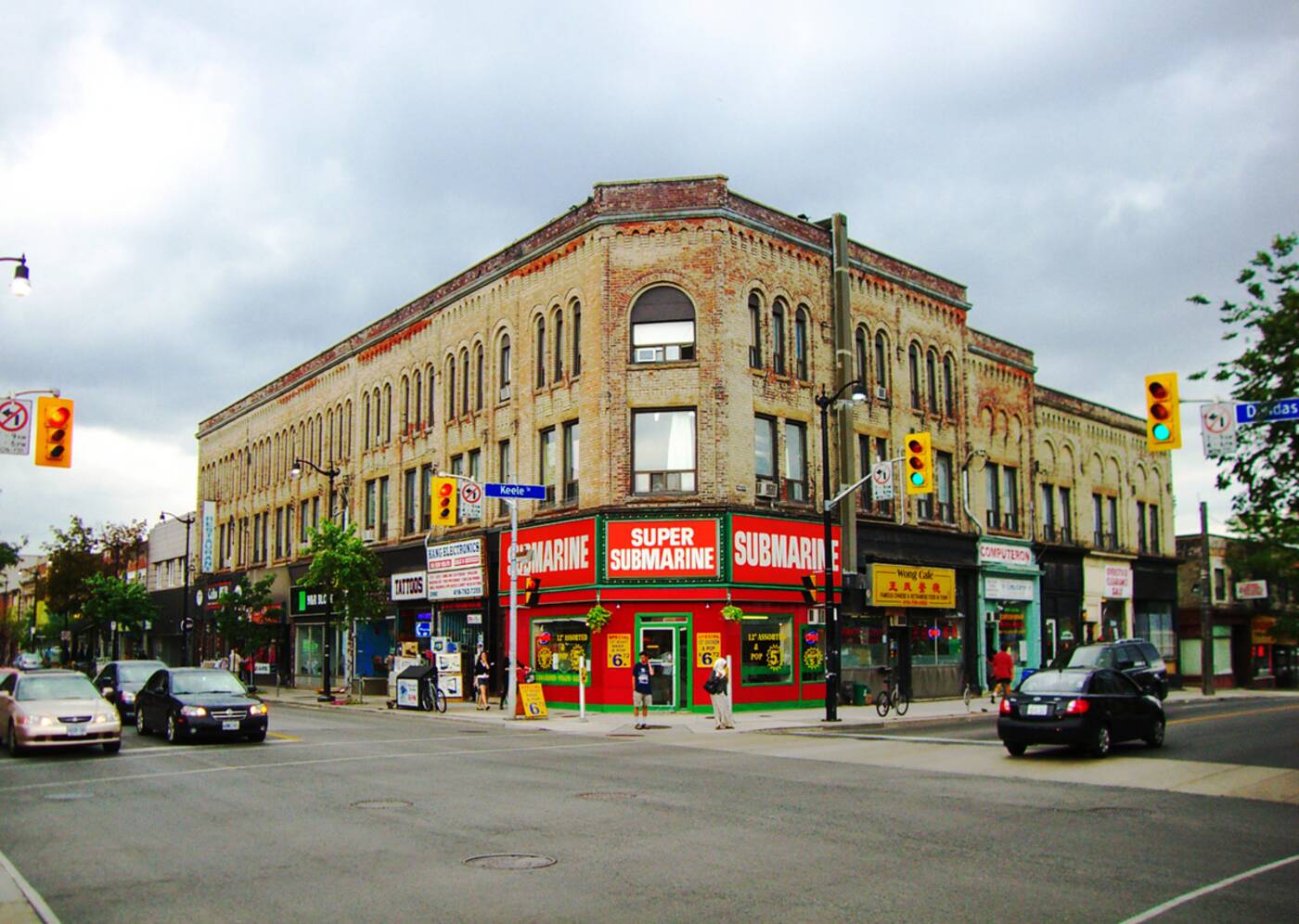 Downstairs, the soon-to-open A&W at the corner of Dundas and Keele has become the new symbol of neighbourhood change. This prime spot had been occupied by Super Submarine since the late 1970s, but like nearby Mr. Antico, it just didn't have a place when more lucrative tenants could be lured to the building.

I'm reminded of a prospective landlord explaining to me how much cheaper the Junction was than the rest of the city not so long ago while looking at an apartment nearby. "Groceries and rent are far less expensive in the city's old village neighbourhoods," he declared with some authority.

It was a good sales pitch, but the validity of the statement is questionable these days. As a neighbourhood's food and retail scene fills out, housing prices go up, and rent follows right along. Eventually, the trailblazing retailers are replaced by more luxury shops. 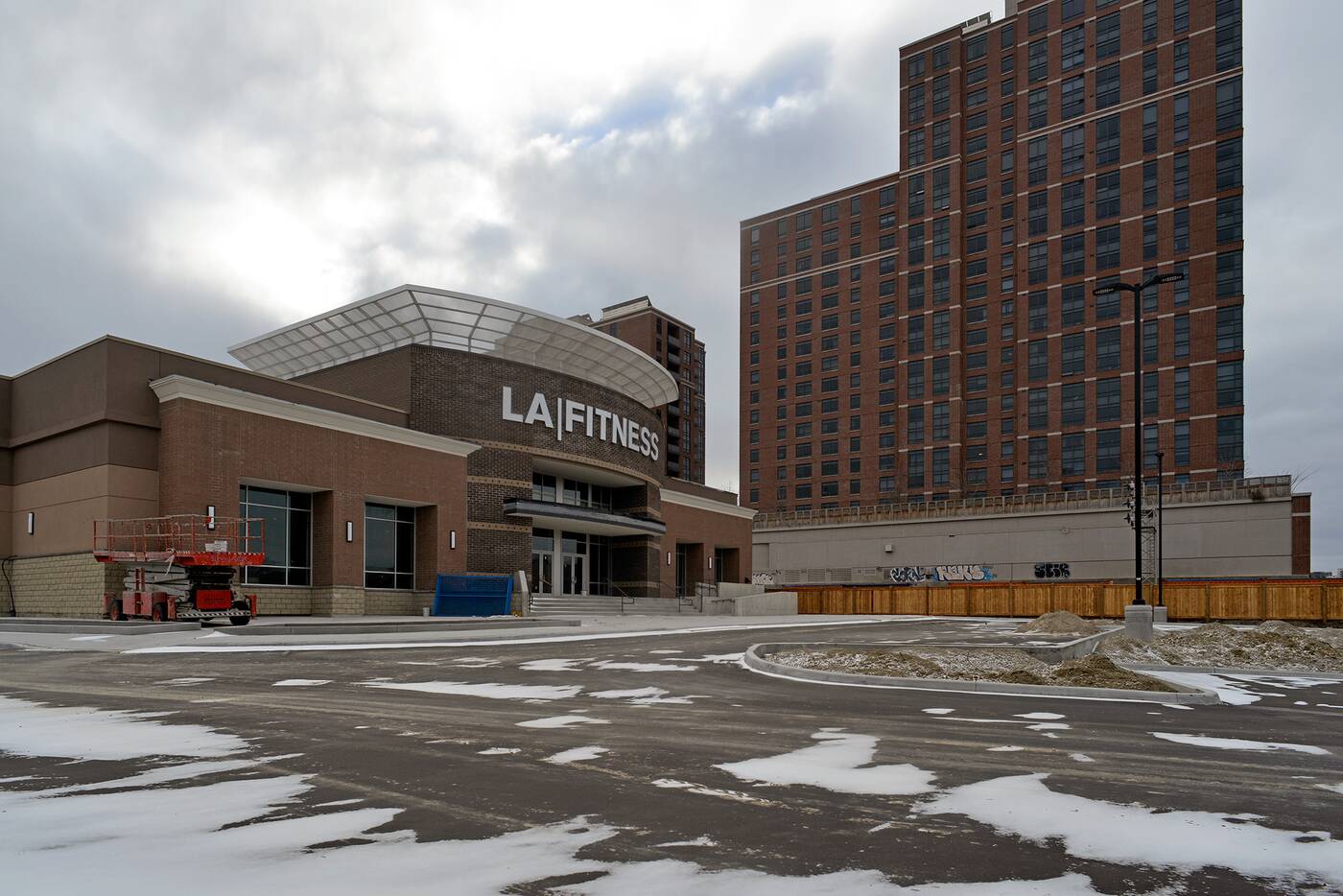 LA Fitness readies to open in the shadow of Heintzman Place. Photo by Derek Flack.

This is playing out in the former industrial area along Junction Rd., where an enormous LA Fitness and Organic Garage grocery store are soon to open. They're both a boon for the neighbourhood, but they also come as a harbinger for the slow death of industry here.

Even 10 years ago, the area had a far more robust industrial element with the Bunge plant at the northern end (now the Stockyards), a string of auto shops along Dundas east of Keele, and the St. Mary's Cement silos around where people will now park for Organic Garage.

For now, the area immediately to the north still features a mix of industrial tenants, from National Rubber Technologies to Topper Uniform and Linen Services and the Philip Sparks factory to Junction Craft Brewing. 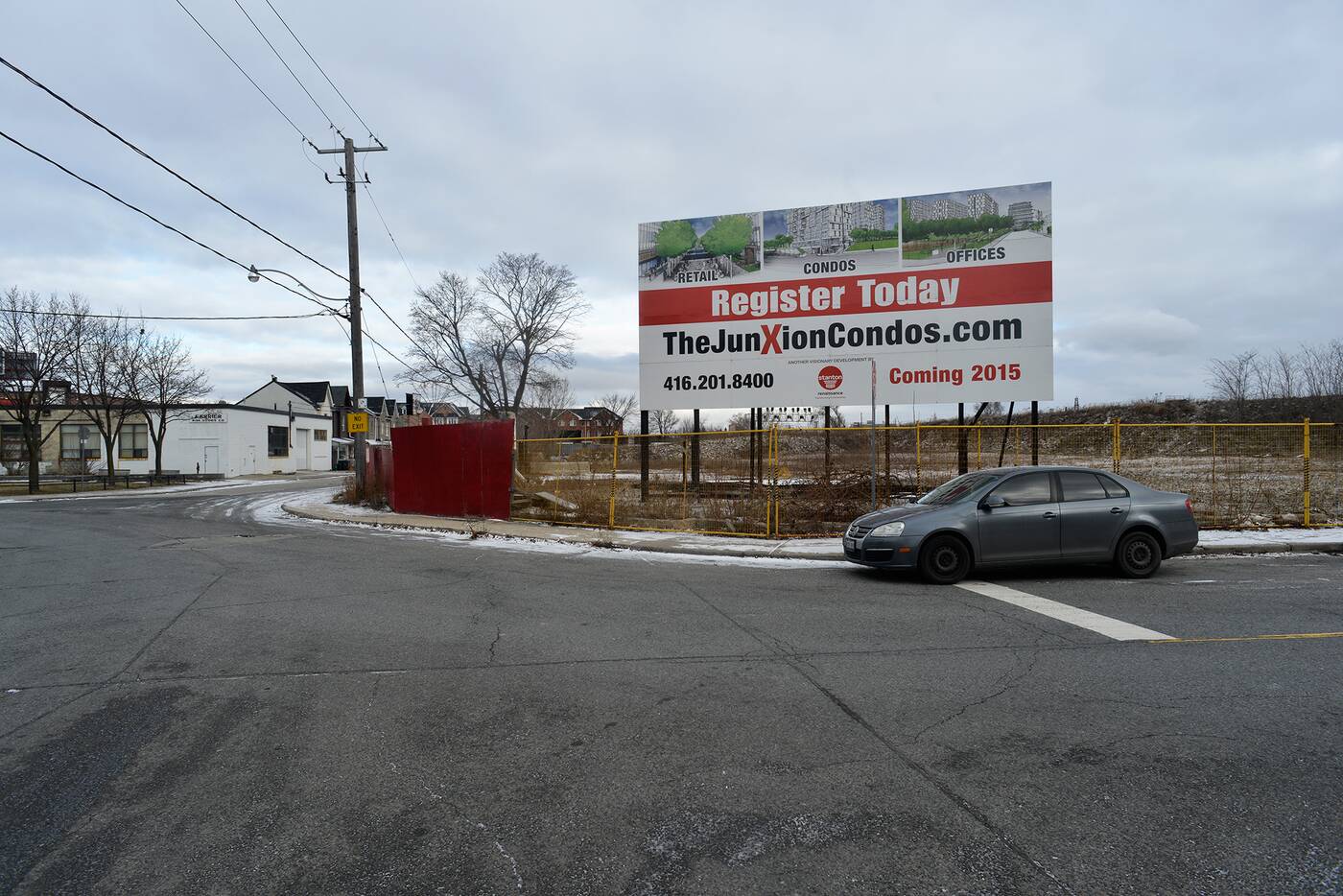 The latter will eventually move to a gorgeous new space on Symes Rd., while the former has voiced its concerns on a number of occasions about residential creep in the immediate area. Odours from its rubber recycling facility are one of the main reasons that a large condo project has been put on hold at Mulock and Lloyd avenues.

Some form of redevelopment has been envisioned since a Benjamin Moore paint factory was demolished in the early 2000s, but it's a complicated affair.

There are serious concerns about the proximity to the rubber plant and how condo towers, even if they're deemed midsize, will mesh with surrounding low rise structures.

There's a delicate balance between old houses and industry in this area that's reminiscent of early 20th century Toronto, but the whole thing hinges on the continued presence of places like National Rubber, which is far from a sure bet in the coming years.

Should more industrial tenants disappear or relocate like we've seen on Junction Rd., there's bound to be renewed interest in development projects like this one. When that happens, you can expect it to usher in another transformation of the once sleepy neighbourhood.