A little rain didn't stop a group of Torontonians from gathering downtwon today to rally against American president-elect Donald Trump. While holding signs, banners and flags, the group marched from Nathan Phillips Square down Bay Street and congregated in front of Trump Tower.

The crowd started assembling around 1 p.m. and took cover from the rain around the periphery of Nathan Phillips Square. Some covered their cardboard signs with clear packing tape in order to keep them dry. 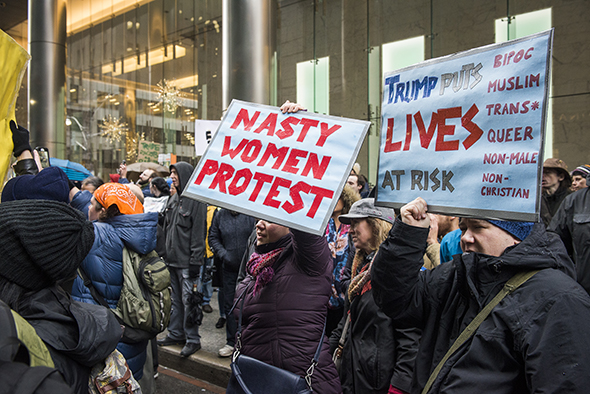 On Facebook, the rally generated substantial attention, with thousands indicating that they were interested in attending. "Hours after Donald Trump was predicted to win, hateful acts against marginalized groups were carried out all throughout North America," wrote one of the event's organizers on Facebook yesterday. 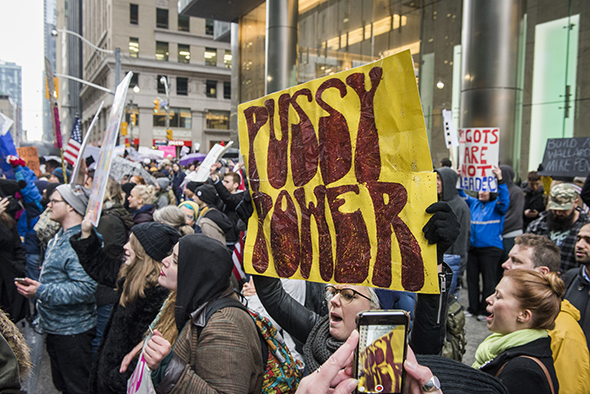 "In recent days, the attacks have gotten worse, and members of marginalized groups in Toronto have been directly targeted. The United States is one of the major superpowers of the world, and we must stand in solidarity with those affected both at home, and worldwide." 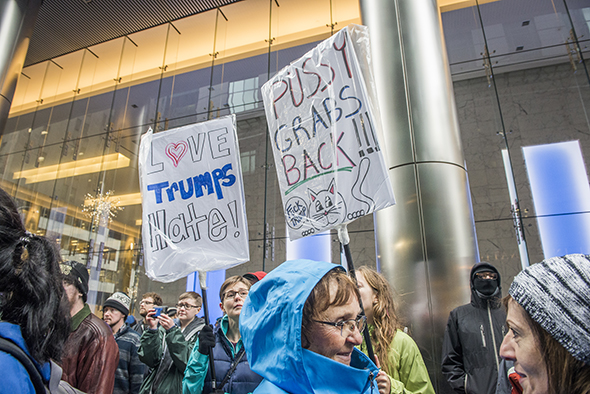 Speakers, such as NDP MPP Cheri DiNovo, former Ontario Federation of Labour president Sid Ryan and community organizer Kim Fry, addressed the crowd."We need to demand from our political leaders that they stand up and have a backbone. We do not them to play footsies with the likes of Donald Trump," said DiNovo. 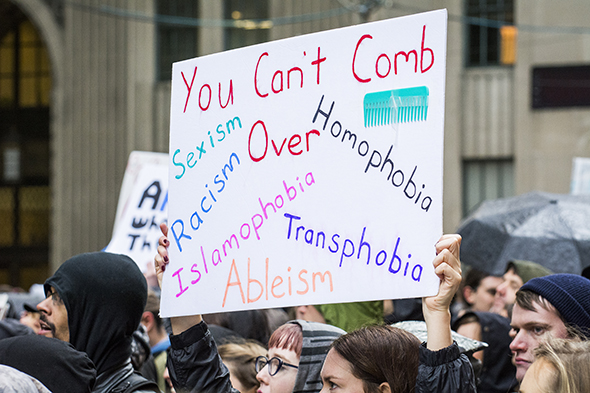 Fry later spoke about the hatred stirred up by the Trump campaign. "It's dark day in the United States, it's dark days here and it's easy to slip into despair and anger, but that's not going to help us. What's going to help us is to transform that anger and fuel that despair into activism and resistance," she said. 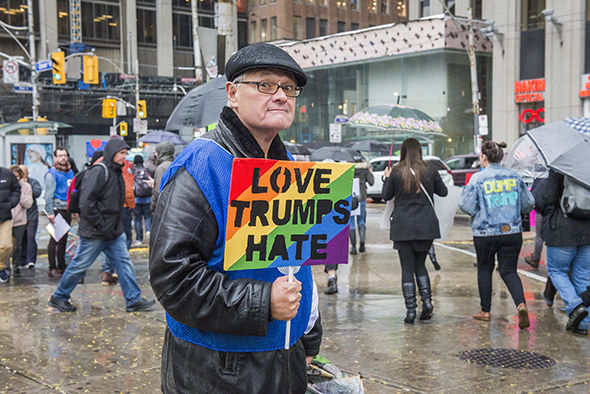 During her remarks, however, a small group of Trump supporters showed up and got into a yelling match with some of those attending the rally. One person was reportedly arrested during this altercation. 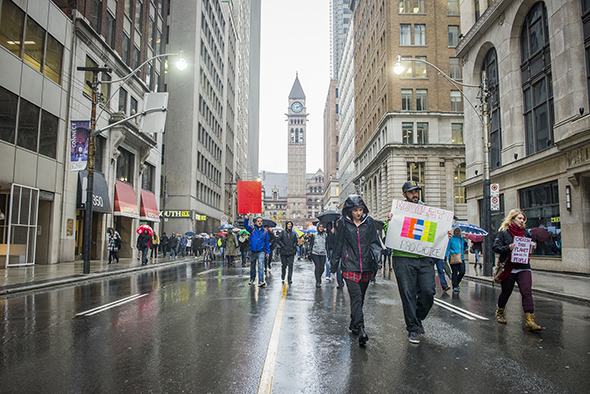 As the rally made its way from Nathan Phillips Square to the Trump Tower, many shouted "Love Trumps hate" as they marched down Bay and rounded the corner onto Adelaide Street West. 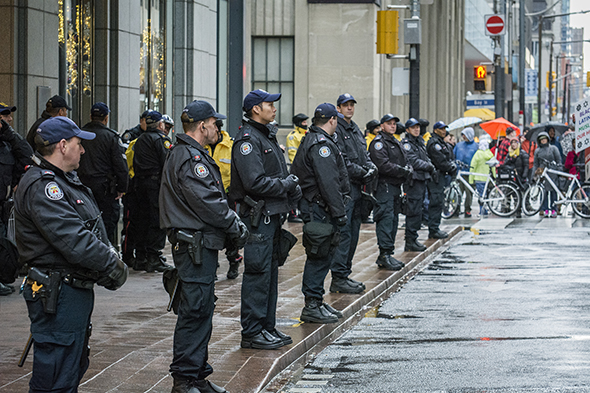 There were police officers along the route directing traffic and the protest shutdown part of Bay and Adelaide Streets. More officers lined up in front of the tower. 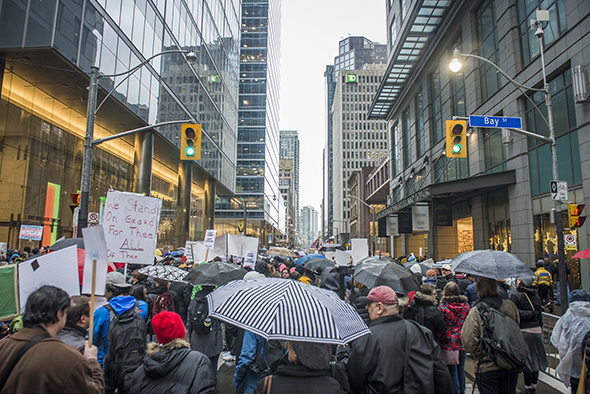 A few members of the pro-Trump faction were also standing by the Trump Tower, however they were greatly outnumbers by those yelling, "No hate, no fear, immigrants are welcome here," and "Your hands, too small, you can't build a wall." 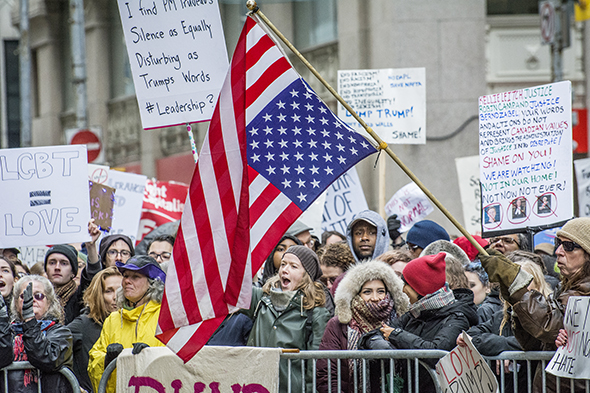 Eventually, the crowd began singing O Canada as they stood outside the building bearing the president-elect's name for the remainder of the early afternoon. 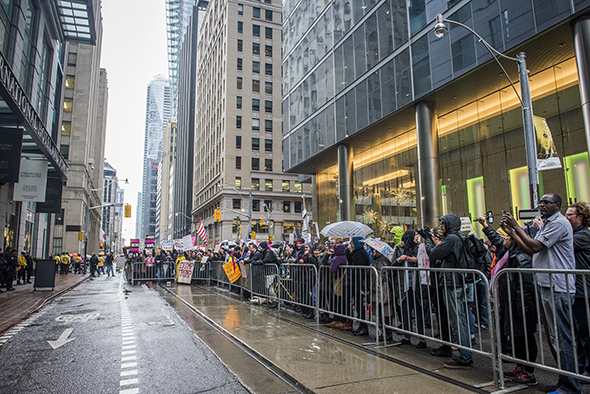