Toronto gets way more parking tickets than other cities

Have you gotten a parking ticket in Toronto? If you've ever left your car somewhere in the city, you've likely returned to find a bright yellow piece of paper on your windshield. And as your stomach dropped, you prayed for a reasonable fine.

But don't worry, you're not alone. According to a comprehensive, cross-Canada investigation by CBC Marketplace, parking officers in Toronto handed out an average of 6,000 tickets per day in 2015 and charged more than $100 million in fines. This is at least six times more than the daily average in other Canadian cities. 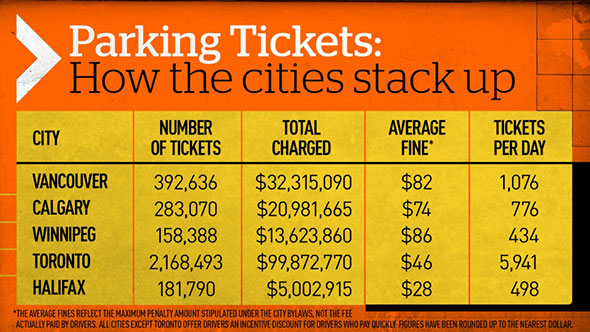 Apparently, Sunnybrook Hospital earned the title the worst place to park in Toronto as officers handed out about 9,000 tickets there. The Shops of Don Mills also got a poor rating; drivers racked up 2,800 tickets at this outdoor mall.

In total, officers gave out a total of 2,168,493 tickets in Toronto, way more than in any other Canadian city, which kind of makes sense because we're also way bigger.

Image via CBC. Photo by Empty Quarter via the blogTO Flickr pool.