It's not easy to travel along Queen Street West these days. That's because there's been construction on this busy thoroughfare, between Spadina and Bathurst, since May 9. The city's replacing a water main, which has diverted the 501 and 301 streetcar routes until early December.

Originally, the mess was supposed to clear up on October 9, but as per usual, that date got pushed back due to delays. And along with transit-related woes, businesses on the usually busy stretch of Queen have been feeling the impact of this prolonged project.

Farshid Sahami, who runs the popular coffee shop Early Bird Espresso, says business is down about 25 to 30 per cent since this time last year. And instead of rolling out new initiatives at his cafe, he's changed is plans and intends to wait until the construction's done.

"We wanted to open our kitchen and we just got our liquor license too," he says. "But I think we're just going to wait for another month or so for them to finish and then we're going to start serving food and alcohol."

There are currently fences lining the south side of the street, the same side b.good's on. "We're into week four of it and I'd say it's probably cost us between 15 and 20 per cent of our business," says b.good Canada president Todd Brooks. 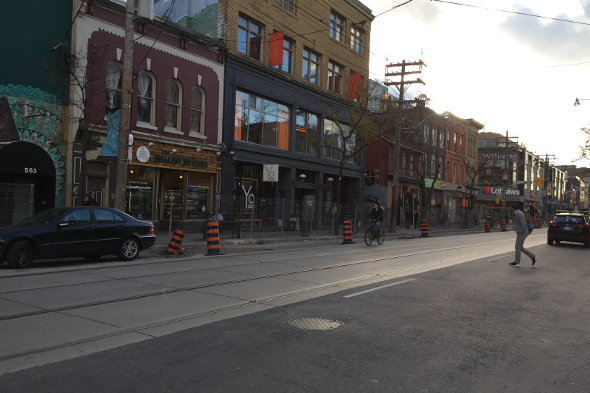 The construction, he notes, hurts foot traffic. But his business also relies a lot on delivery services like foodora and UberEATS. The fencing makes it difficult for these companies to pick up from the chain restaurant's Queen West location.

"The drivers used to be able to pull up right in front of the restaurant, run in and get food," says Brooks. "And it's much more difficult now."

Death in Venice is on the north side of the street. And while it's in the clear now, owner Kaya Ogruce feels for his neighbours across the road. He had fencing in front of his business for about four months this past summer.

"So throughout the summer, which is my golden time for selling gelato, there were moments when people couldn't walk in front of my store," he says. Dust and debris also made its way into his restaurant, clogging up two of his freezers.

Luckily, the construction's coming to an end soon, but then it'll be winter, a time when foot traffic's notoriously slow. But at least the streetcar will be running again.