What it's like to commute on the new Bloor bike lanes

The Bloor Street bike lanes are almost fully installed, drawing cyclists to try the new infrastructure out on their way to and from work. Part of a pilot project, the lanes currently run between Shaw St. and Avenue Rd., cutting through the heart of the Annex and across the top of U of T's campus.

Given that my commute takes me from Bloordale to Queen West, I decided to forego my usual trip along Harbord to check out the lanes and chat up my fellow riders about riding on the new Bloor.

"This is a kind of a dream come true," a rider named Janet tells me. "I never thought the political climate would exist in Toronto for bike lanes to be built on Bloor. Let's see if they remain beyond the pilot [project]." 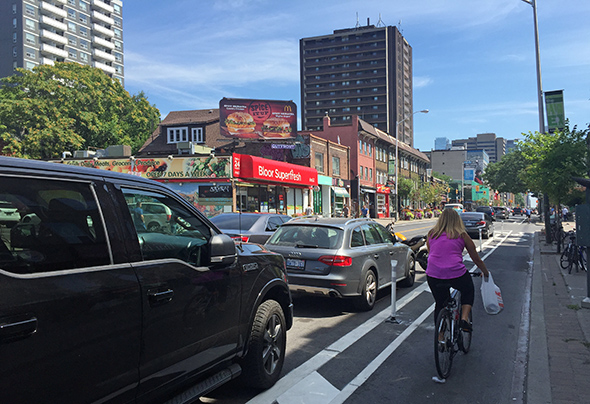 While there's still work left to complete on the lanes (most notably the installation of barrier poles), cyclists have been using the designated space for a few days now, and those I spoke with were optimistic about the extra safety offered by the lanes.

"I've had some problems with parked cars since I tried them out, but the barriers aren't up yet," explains Matt Park, who commutes from Lansdowne and Davenport to Church and Wellesley daily. "Even with a few obstacles, I think this stretch is vastly improved because Bloor could get really hairy before."

My experience is similar. The section of Bloor St. between Spadina and Bathurst used to be quite unpredictable due to an increase in traffic through the Annex, which always required riders to be on the lookout for turning vehicles and suddenly opening doors.

It's not perfect, of course. The lanes still need appropriate signage added to help both drivers and cyclists to know where the bike lanes end and beginning, which is a bit confusing at times right now. At Bloor and Bathurst, for instance, riders are directed away from the curb to aid vehicles in turning right, but few knew to do this today. 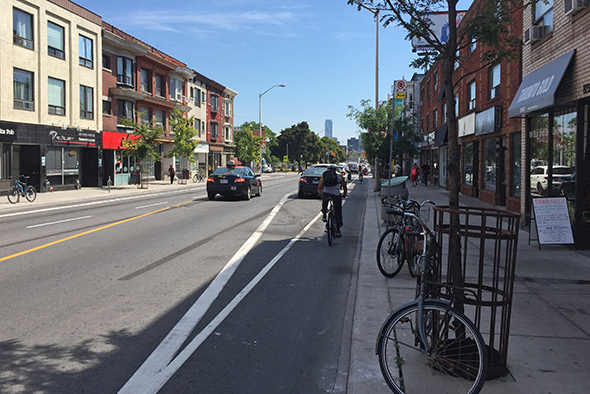 And what about overall traffic levels? These will be tracked as part of the pilot project, but anecdotally, there was a bit more clustering at intersections during my ride, which took place outside of rush hour. It will be intriguing to track how this plays out once appropriate signage is up and all road users are directed to their appropriate places.

In the meantime, a major stretch of Bloor has finally become bike-friendly. "I used to avoid Bloor St. like the plague," Janet confesses. "I'd take this really convoluted route through the side streets, but now my commute is a few minutes faster by avoiding this."

Have you tried the new Bloor bike lanes? Let us know about your experience in the comments.