The weird and wonderful concrete river in Toronto

Toronto's river system has been profoundly altered by the growth of the city over the last century. From straightened channels to buried creeks, development has tended to envelop the city's waterways in concrete. Nowhere is this more dramatic than at Black Creek, a sub-watershed of the Humber River that winds down from Vaughan to just north of Dundas St. West before joining the larger waterway.

Black Creek has many different faces. In some areas it remains natural, in others it culverts under major roadways, and in the section southwest of Weston Rd. and Humber Blvd. North it follows a concrete channel that seems wholly bizarre in Toronto. 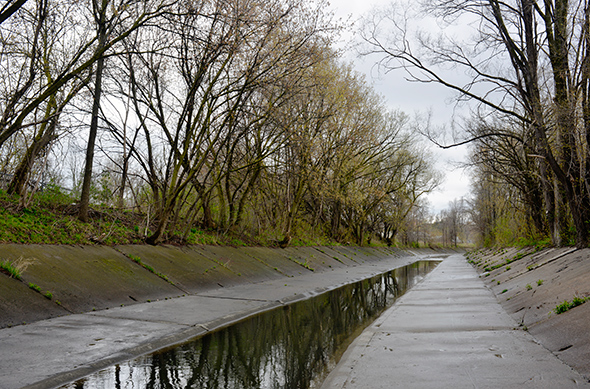 It's been noted elsewhere by Jake Tobin Garrett that this portion of Black Creek is something like a mini-version of the LA river, that famous concrete waterway that's played host to so many iconic moments in cinema, from Chinatown to Terminator 2. 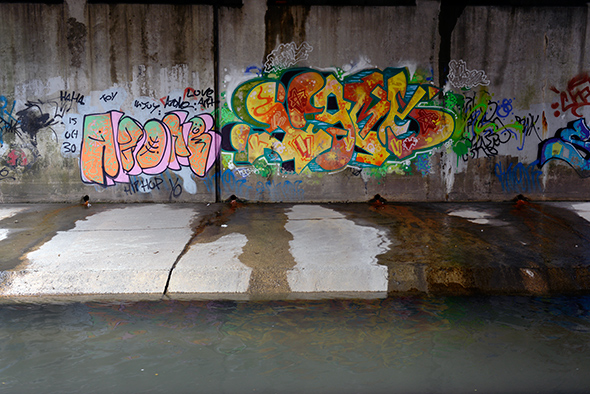 I've been intrigued by this strange hybrid waterway since I first drove by it over a decade ago on the way to York University. At the time, I merely parked and looked down at it from the bridge along Weston Rd., but it's actually quite easy to access its concrete banks when the water levels are low.

You wouldn't, however, want to try this in the midst of a rain storm. The whole reason that Black Creek looks like this is because of severe flooding during Hurricane Hazel. Its concrete banks, which spread well beyond the river on either side, are designed to better manage stormwater. During heavy rain, the waterway will rise well above its central channel and rush along the artificial shore. 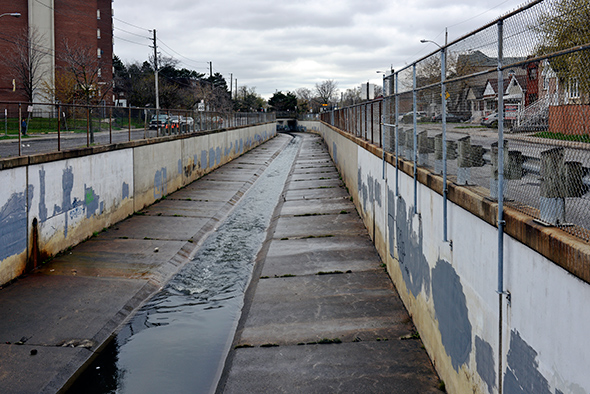 This is some of the most polluted water in the city, given the various industrial sites that the bottom portion of the waterway runs through. And yet there's a strange beauty here that's difficult to articulate. As much as nature has been tamed by the stark concrete channel, the degree to which it has reclaimed a small existence here is a testament to its ability to endure.

"It's horrific and beautiful at the same time, in the way that weird, concrete urban things often are where nature has started to reinsert itself in all the little nooks and crannies," Garrett offers in eloquent summary of the strange aesthetic intrigue this place possesses. 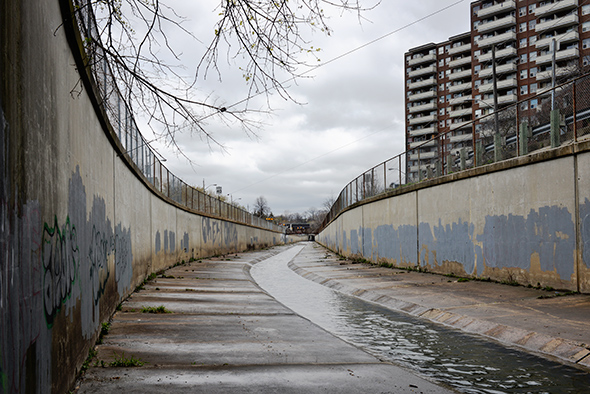 As Toronto imagines dazzling new ways to reclaim its waterways, it's worth pausing over Black Creek. City planners would resist the creation of such an eyesore these days for good reason, but there's something about its ambivalent paved banks that speaks to the odd beauty of concrete and the interstice that joins the built landscape and nature.