No Frills store in Toronto suddenly shuts down

It's been a tough 24 hours for Loblaws. Earlier today the grocery chain saw all its affiliated stores temporarily close when a computer bug prevented them from processing sales. And yesterday, one of the worst No Frills in the city suddenly shut down over worries that the aging grocery store was unsafe.

The No Frills at Coxwell and Gerrard won't win any awards for its shopping experience. Unlike some other No Frills locations (the one at Dundas and Lansdowne comes to mind), the store is small, uninviting and is otherwise the epitome of a grocery shop without any of the so-called frills.

It is, however, the only major grocery store in what is a burgeoning neighbourhood on Toronto's east side. Just down the street a brewpub is under construction and a Pizzeria Via Mercanti is scheduled to open soon around the corner. 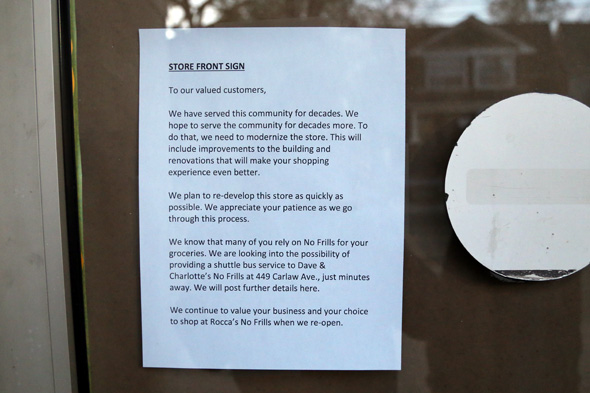 A note posted to the front door indicates the No Frills will undergo building repairs and renovations and that plans are in the works to arrange for a shuttle bus to take area residents to the nearest No Frills at Carlaw and Gerrard.

Passerbys milling outside the store last night were sharing what they heard about the closure with the (unverified) gossip being the store had just been visited by a building inspector that morning who found the building unsafe and declared it be evacuated and shut down immediately.

A Loblaws spokesperson told Beach Metro Community News that the store was "not closed due to an infraction" and that the closure would not be permanent.