TOT the Cat Cafe has become the centre of controversy as allegations from an apparent ex-employee made the rounds on Facebook this weekend before lighting up the Reddit Toronto forum.

Of the various concerns, it's alleged that the cats are not properly fed and provided with adequate water. The initial Facebook post also indicates that the Toronto Humane Society (THS) removed the cafe's cats in the wake of safety concerns.

When reached this morning, the THS confirmed that they did remove the cats from the facility sometime last week and is not working with TOT at this point. Executive Director Barbara Steinhoff notes that there were a number of discussions leading up to this action based on concerns about TOT's ability to meet the THS's strict protocols. 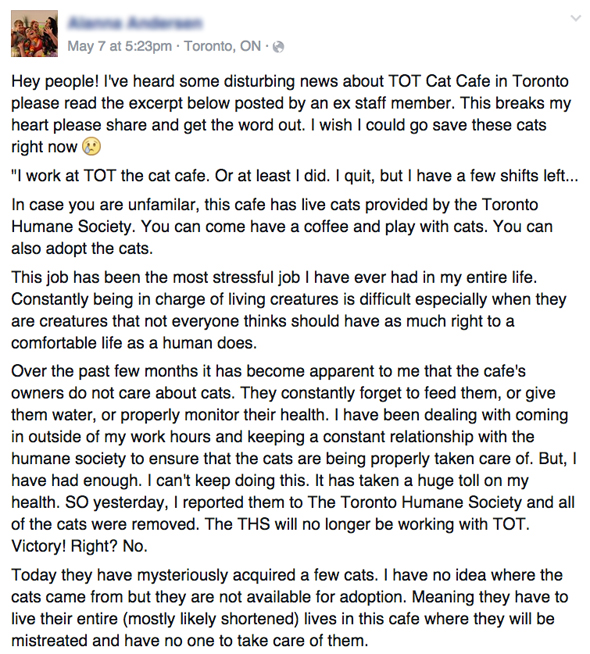 The THS was also not comfortable with the minimum purchase price set in place to enter the "cat room" and the conditions set by TOT that in the event a cat was adopted it would only be released to the new owner after the THS supplied the cafe with a replacement cat.

When reached for comment, founder Kenneth Chai notes that he's aware of the rumours circulating, but doesn't know who or how they were started. He states that his ultimate goal is to help cats and that despite the conflict of interest between TOT and the not-for-profit THS, the cafe serves as the only way to generate income to keep operations running.

Chai further asserts that feedings are on a schedule and that sometimes the cats (like humans) do get sick especially under the stress of a new environment.

When asked to address concerns that the cats have no place to de-stress, he points to the design of the cafe outfitted with cages for each cat and hiding places under benches and on wall mounted planks. He says that cats are independent creatures and "when they don't mind being pet, they'll expose themselves".

TOT is not yet willing to make any formal announcements regarding new partnerships with charitable agencies in the works. At the time of publishing there were two cats in the cafe available for adoption, but Chai isn't willing to reveal where they've come from at this point in time.