As the city's original 19th- and early 20th-century buildings continue to be redeveloped, the sentiment that Toronto is progressively losing architectural character seems to meet general agreement. But in the absence of examples over and above the sanitization of Yonge St., discussion of the matter can quickly become nostalgic whining. 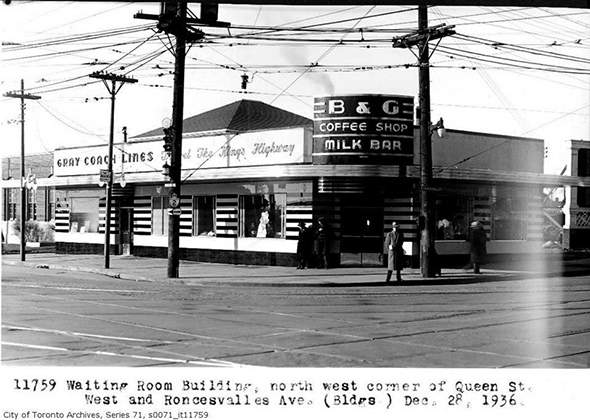 I'm all for nostalgia, of course, but more interesting than whining is highlighting places in the city that are at the crossroads of history - places where one might witness Toronto in transition. Such is the case at the southwest corner of Queen and Roncesvalles. Here you'll find the veneer-coated remains of the Deco-styled Gray Coach Bus Terminal and what was once the Edgewater Hotel. 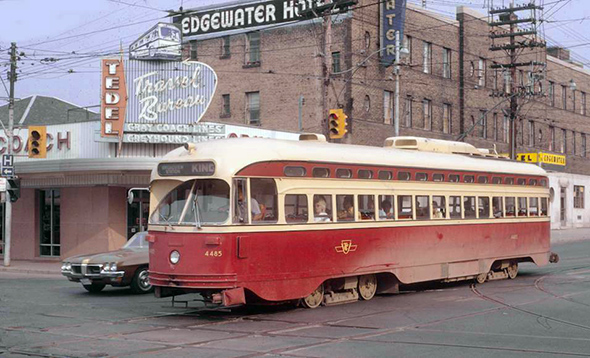 Rick McGinnis eulogized the Edgewater a number of years ago, the structure of which continues to labour on as a hotel (these days as a Howard Johnson). The old bus terminal, however, deserves some more attention. It's exactly the type of building that slips away without much concern as cities grow up, even as it was once a subtly beautiful addition to the urban landscape. 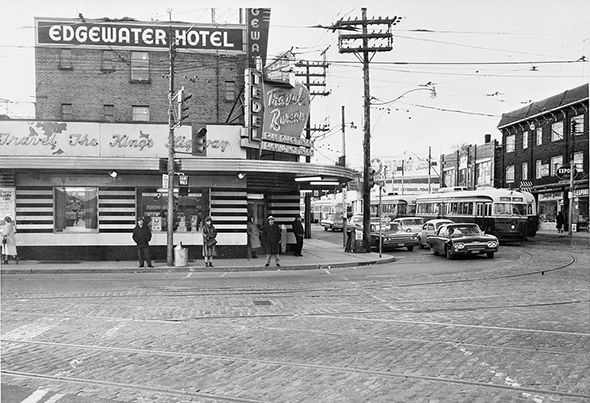 Opened in the 1930s when the TTC operated an inter-city commuter bus service known as Gray Coach Lines, the terminal joined the better-known downtown bus depot as jumping-off points for destinations like Hamilton, Niagara Falls, and London (along with a host of small towns across Ontario). 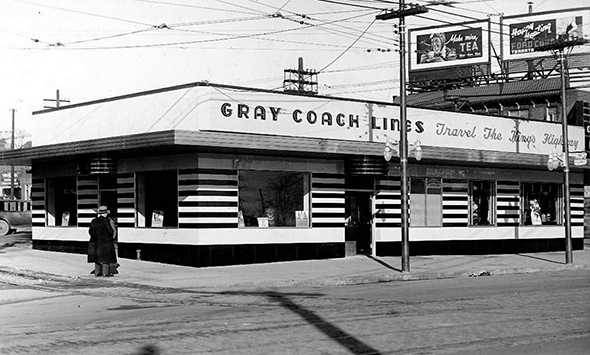 Both buildings were constructed in an Art Deco style, though the shiny steel canopy at the Sunnyside terminal graced it with an appearance that felt as though it was of the road. This looked like a bus terminal from a small town, complete with a coffee shop and milk bar upon its opening. 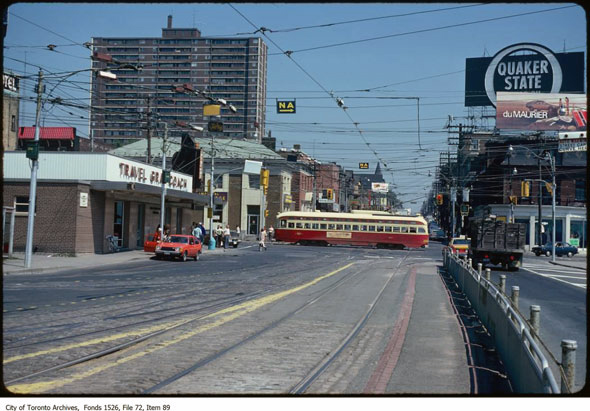 The 1960s would only increase its road-worthy appearance, as the glorious "Travel Bureau" sign competed with the Edgewater's for attention at this key suburban intersection. This place looked perfectly sleazy at night, when the entire intersection was a competing mess of neon glow.

The '70s marked a descent. The Edgewater seduced the day drinkers, and the intersection became seedier. Travel by coach was increasingly less luxurious. Still, Gray Coach Lines hung on. In the days before GO Transit, it provided a crucial service.

Gray Coach would eventually fold in the early 1990s. The TTC sold the inter-city bus service to Greyhound at the outset of the decade. In the years immediately following the closure of the terminal, it served as a smoke-laden donut shop, but eventually a McDonalds opened in the former space.

Interestingly, the restaurant decided to keep the old marquee, so you can still catch a glimpse of the former life of the building. Like the Edgewater, however, the character of the place has been covered up. It's a shame. If the building escaped the corporate branding, it might have made an amazing bar or independent restaurant.

Photos from the Toronto Archives (with the exception of the postcard).