This is what Toronto's newest library will look like

Toronto's newest library is finally a go after city council approved plans to replace the Perth branch with a new facility to operate at the base of a condo near Dupont and Lansdowne. Plans for a new branch at 299 Campbell have been in the works for years, but issues related to the height/design of the condo have finally been cleared.

The developers and designers have significantly scaled back the height of the condo in response of concerns from the city, dropping the proposed number of storeys from 18 to 12. The latest renderings show a building that will better match the existing density of the neighbourhood, even as it is less bold from an architectural standpoint.

But it's really the library that is the exciting part. For a while it looked as though the Perth branch, one of Toronto's smallest, was going to close. The opportunity to provide the community with a new library space was a forward-thinking plan that involved an openminded developer in the form of TAS, plus strong community organization and political will from local councillor Ana Bail達o. 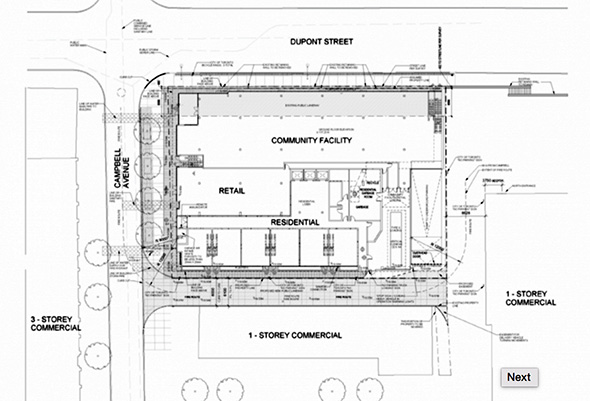 The existing library branch to the west is just over 3,500 square feet, while the new facility will clock in at 10,000. That's a significant upgrade that will prove ever more valuable as a swell of other condos along Dupont necessitate additional community resources for new residents.

The existing lot at 299 Campbell has seen its better days. This is one of those developments that you might point to as an example of successful city building. Yes, it will add more condo units to a street that might not be so well equipped to handle the various redevelopment schemes on the table, but at 12 storeys with designated community space at grade, there's little not to like here.