Did you know Toronto has north/south divided streets?

I lost a bet, so I have to write this post. The subject under debate was whether or not Toronto has any streets with the official designation north or south. I couldn't think of any at the time, so claimed that this was not the case, my reasoning being that there was no central street that acted as a north/south divider in the way that Yonge St. splits east and west.

I was right about that, at least -- but not in general. Toronto does, indeed, have a small number of streets divided into north and south sections. One of these is Westmoreland Ave., which is split at Dupont St. by a warehouse and the CPR rail tracks. When the street resumes north of Geary, it bears the designation Westmoreland Avenue North.

Well, it does on maps at least. The street sign still merely reads "Westmoreland Av." The interesting thing is that, given the numbering of the street, it makes sense that the "north" is kept off the sign. It's not really necessary to add such a designation when the street numbers run sequentially without repetition.

Unlike streets that bear the east/west designation, addresses do not repeat on each section of Westomoreland. A street like Queen, however, is numbered sequentially on either side of Yonge St., such that you have both 1 Queen St. East and 1 Queen St. West (among a host of other repetitions). 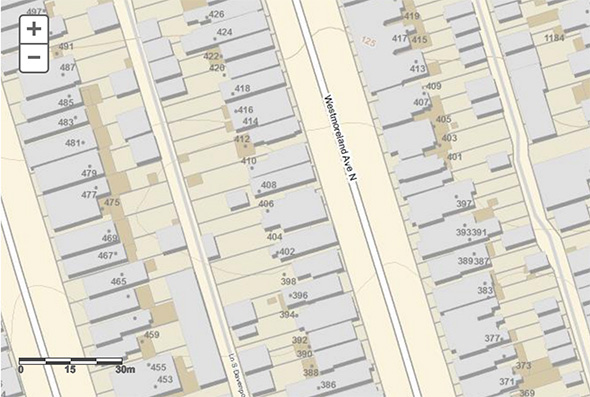 In other words, the addition of the "north" heading to Westmoreland is just a little wayfinding aid. It doesn't need to appear on the street sign because if you've made it to the section north of Geary, you don't require further direction.

If, on the other hand, you're walking north from Bloor and looking for number 333, say, then it helps to know that it's on Westmoreland Ave. North because the street temporarily ends at Dupont. The addition of the "N" lets you know that the street continues ahead of you. The same holds true for Salem Avenue, one street to the west, which is also split at Dupont.

A similar situation exists on Bellamy Rd. in Scarborough. Once a continuous street, a CN grade separation built in the 1960s divided the street into two sections. The addresses still run sequentially with no double-ups, but the portion of the street north of Eglinton bears the "N" designation and vice versa to the south.

One street that does not bear such a useful split designation is Gerrard St., which gets completely wonky on the east side of Toronto. While the street is divided into east/west sections at Yonge St., when it hits Coxwell the street has upper and lower sections, though the designation is unofficial.

One wonders why it isn't official, though. For someone unfamiliar with the area, it's a complete nightmare navigating Gerrard when it does its jog to the north. At least city mapmakers and planners were in a kind mood when it came to Westmoreland and Bellamy.