Historic Toronto mansion is on the move

Sherbourne and Bloor isn't exactly a happening intersection these days, though that's starting to change. Along with a handful of major new developments, this block has a rather storied past.

In the late 19th century, it was home to Toronto bigwigs and their respective mansions. The Gooderham House at 592 Sherbourne, for instance, eventually became the Selby Hotel in 1912 and later, the Clarion Hotel. It's also famous for hosting Ernest Hemingway during his brief stint at the Toronto Star in the early 1920s. 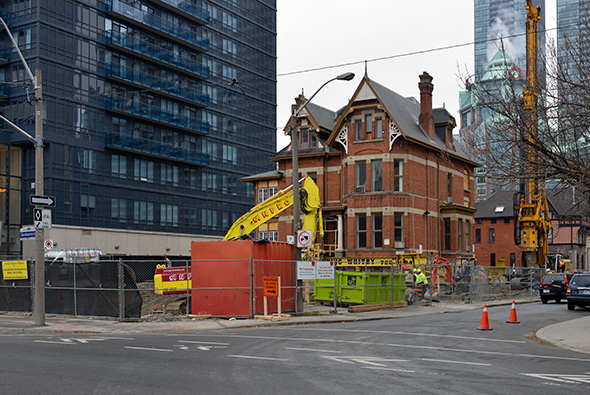 In 2010, Tridel worked the James Cooper mansion into a 32-storey condo tower and it looks like the neighbourhood's Victorian architecture will remain relatively intact. That's because the historic Gooderham house will become part of MOD Developments' and Tricon Capital's The Selby, an incoming 50-storey building designed by bKL Architects, reports Urban Toronto.

Unlike its neighbour, The Selby will be made up entirely of rental units. The Gooderham mansion will act as a lobby as well as a social hub that may even include retail space, such as a cafe.

To accommodate construction, as Urban Toronto notes, the mansion will be moved closer to sidewalk. Eventually, it'll be set farther back from Sherbourne and ultimately, it'll be attached to the new rental tower.

What do you think of The Selby? Let us know in the comments.