There's a bit of intrigue to be had for Toronto transit geeks at College Station right now, as the TTC is in the midst of revamping the ad holders on the platform. The work has left a hole in the existing brown tile that reveals the original 1950s Vitrolite panels. Similar work a Wellesley has not had the same effect.

Aside from Eglinton Station, which still bears its first tiles, this bit of TTC history has long been hidden behind replacement schemes that lack the austere character of the polished Vitrolite that graced the system for its first few decades. In other words, this is a rare sight. 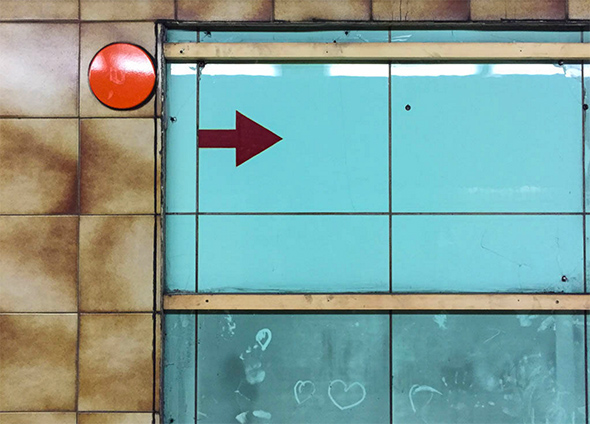 There was a break in the plastic panelling at St. Andrew Station a few years ago before it was updated with the retro-styled metal panels it now sports, but it was less exciting for the fact that it was grey, which we can see any time at Eglinton. At College, we can now get a peek at English Egg Shell, which was once also found at King, Rosedale, and Davisville.

In any case, the difference between the current tile and the original is rather stark and quite interesting if you've ever wondered why the TTC's opening look was described as "bathroom architecture." I suspect it won't be on view for much longer, so pay attention when your next train rolls through College Station.

Photos by Lori Whelan and Michael TO.