Want to watch Blue Jays playoff games at a local bar or pub? Aside from the best sports bars in Toronto or the nearest neighbourhood bar showing the game, here's a guide to make the most of post season play if you don't have seats inside the dome.

WHERE TO WATCH WITH A CROWD

Steam Whistle
The brewery next to the Rogers Centre is right by all the action - they'll have the game on and a food truck parked outside.

The Dock Ellis
All playoff games screen live and with sound plus $5 tall cans of Woodhouse Lager during all Jays playoff games.

Broncos
After a recent reno, the slider bar is sporting five 55" TVs and a 110" projector. During Jays games, get $2 cheeseburger sliders and $5 Moosehead pints, plus a free shot for everyone if when the Jays win a game.

Murphy's Law
Enjoy half priced wings and $4.50 pints of Mill St. while watching the first playoff game at this pub in The Beaches.

Tequila Bookworm
Head upstairs to watch the BlueJays vs. Rangers with $5 pints for the game.

The Rhino
Games on the big screen, brews from Left Field.

Habits Gastropub
Doors open early at this College Street pub playing the game on a 100" HD screen with surround sound.

Ive been loving all this fan-made merch all season and now into the post season there's even more ways to wear your Toronto Blue Jays pride. While the official MLB apparel is here, some of this other wearable memorabilia has me all riled up. 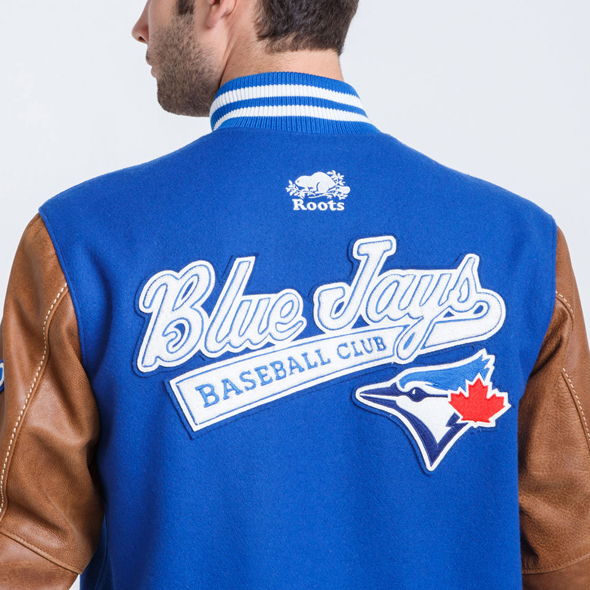 Roots Jays Award Jacket
If you've got $600 to drop, this might just be the most luxe way to wear your home team pride. A $110 sweatshirt? Well that's totally justifiable. October is cold right?

Made For October
Fanatics has got this tri-blend Blue Jays postseason T-shirt for sale online for $28.95 US.