Last remains of sleaze are wiped from Broadview Hotel

It won't be long before the New Broadview Hotel at Queen and Broadview has shed the last signs of its sleazy history. Workers are in the process of cleaning up the exterior of the 124-year-old building as part of ongoing work to turn the former strip club into a boutique hotel, restaurant, and coffee shop.

The interior of the building has been stripped back to the bare brick walls while Streetcar Developments adds additional floors. When it's finished, there will be six floors in the main building (up from the original four) and a rooftop terrace. The turret at the corner of Queen and Broadview will be converted into an "executive suite," according to planning documents.

Streetcar is also planning to restore the metal windowsills, exterior flashing, cornices, and add a green roof to the building. The rear extension, which at time of writing still carries a black and white sign promising "the best party in town," is due to sprout additional floors and be host a cafe on the ground level.

On the outside, the old metal fire escape on the Broadview side of the building are in the process of being removed in favour of more discreet (and probably safer) internal egress routes. 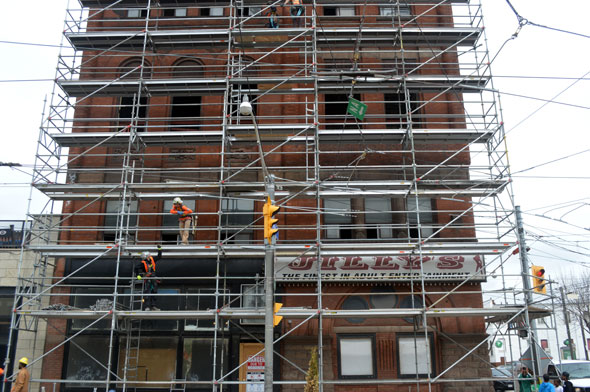 Though the building has been used as a hotel for more than a century, it was originally constructed by soap magnate Archibald Dingman to house offices. In 1907, "Dingman's Hall" was reconfigured to accommodate sleeping quarters on the upper floors, but by the 80s it had become known as a strip club--"Maxi's Lounge" in 1981 and "Kicker's" in 1983. Streetcar bought the dilapidated building in 2014.

On Queen St., the recent arrival of scaffolding suggests imminent changes, but for now the darkened Jilly's sign still clings to the exterior.