The 5 strangest things found in the Toronto Harbour

Harbour Master Angus Armstrong knows the bottom of the Toronto Bay like the back of his hand. A police diver for 26 years and an employee of the Toronto Port Authority (now PortsToronto) for 14, Armstrong has seen everything from classic cars to home made concrete sailing ships dragged off the mucky lake bed. "I've spent my whole life on the water," he says. Before joining the police he was a lifeguard on the Toronto Islands.

Part of the reason why the cops and PortsToronto find so much stuff is that the harbour must be routinely dredged in order to keep it at a standard depth of 8.2 metres. Seafaring vessels like the ones that deliver sugar to the Redpath factory on Queens Quay East precisely calculate their load and depth in the water, meaning an unchecked build-up of natural silt could potentially lead to a vessel becoming trapped.

Toronto Police also routinely patrol the harbour. Criminals have long believed the water will permanently devour any evidence of crime only for a diver to haul up the knife, gun, or vehicle a few days later, fingerprints or other evidence intact.

We asked Armstrong to draw on his 40 years experience and tell us about the strangest things found in the Toronto Harbour.

A novelty trackless train
Some time in the 1960s, Armstrong says a team of divers found the locomotive from a novelty trackless train buried in the silt at the east end of the harbour. Used at the CNE to pull around tired and dizzy Exhibition goers, divers guess someone must have snuck it out during the night and somehow crossed the city undetected.

"It was pretty amazing," Armstrong says. "It had been there a long time, supposedly. It was covered in moss and everything else." Divers often find stolen cars (more on that later,) but the trackless train was a first, especially because it was never reported stolen. "That usually is happening a lot. You dig back and find these were reported cases, but sometimes you find things that were never reported."

A homemade sail boat
Ferro-cement boats used to be all the rage in the 1970s, Armstrong says. Made by casting a cement-like material around a wire mesh frame, they were cheap, fun, and pretty flimsy. This one was about 50 feet long and firmly embedded in the lake bed. "We had no record of this sinking. You would think a big boat like that going down would have been reported."

"Our feeling was someone had this guy had in the water, in the shipping channel, and he just kind of walked away, abandoned it. And probably one night, in a bad, violent storm, it broke free, got out, and sunk. When people saw it was gone they all thought he took it away." The harbour commission had to dredge up the wreck so that it wouldn't pose a hazard to shipping. "The longer they've been down there the more difficult they are to get up." 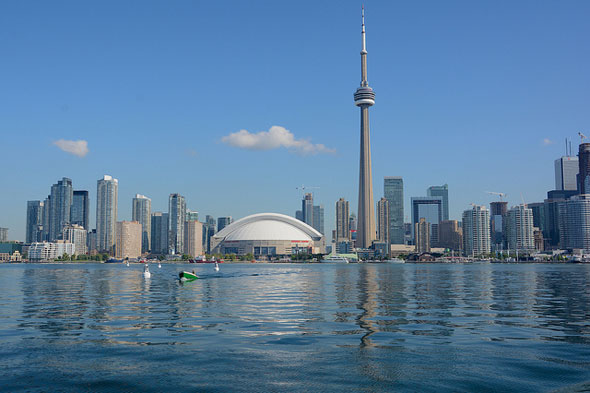 A brand new Jaguar sports car
While working with the police dive unit in the 1980s, Armstrong and his team discovered a brand new racing green Jaguar sports car submerged in the Western Gap near the foot of Bathurst St. It had an all-leather interior and was presumably very, very expensive.

"We hauled it out of the water and we find it had been reported stolen, but the keys were inside it," Armstrong says. "So we called back the owner and he confesses. He says: 'Well, officer, I didn't want to say it before, but it's a gift from my wife and I'd gone to my girlfriends apartment. I guess my wife followed me and she jumped out of her car and jumped into my car with the spare set of keys, drove it down to the harbour, and shot it into the lake."

"The insurance company didn't cover that!"

A samurai sword
Police divers have many times pulled out knives, guns, and other potential evidence of violent crime from the murky depths, but one weapon that stands out in Armstrong's mind is a massive samurai sword. "We didn't know exactly what was the reason for throwing that into the lake," Armstrong says.

Weapons and other suspicious items found by police or PortsToronto divers are carefully brought back to the surface and placed in evidence. Fingerprints and other incriminating evidence often survive being submerged, so any weapon divers find could prove vital to an investigation. These days, however, evidence of criminal activity is become less frequent.

"It's changed so drastically over the last 20 years," he says. "In the old days you could come down here and fire a gun off in the air and not be noticed because you're in the middle of an abandoned pier. Now it's so public down here we see a lot less issues."

Lucky charms
No, not the breakfast cereal.

Although fewer people are using the harbour as a dumping ground for weapons and garbage, Armstrong says there has been a sudden rise in the number of good luck charms sent into the lake from the shore. Padlocks, ribbons, candles, eggs, and other talismans have become common discoveries in dredging buckets over the last decade.

"You put it in a paper boat and set it adrift out in the lake," Armstrong says. "Of course, they sink, and you find all these charms ... they're usually right by the shore line or by the [Western] Gap. An easy wall you can access."