Bloor Street East between Jarvis and Sherbourne has seen relatively little in the way of high-rise residential development since the 1970s--until now. The oxymoronic "Rosedale on Bloor," a pair of condominium towers planned for the south side of the street beside the new National Post headquarters, could add new life what's long been a staid stretch of downtown.

The proposal has been with the city since Dec. 7, 2012, but an appeal to the Ontario Municipal Board set for early next month could trigger construction some time this summer. 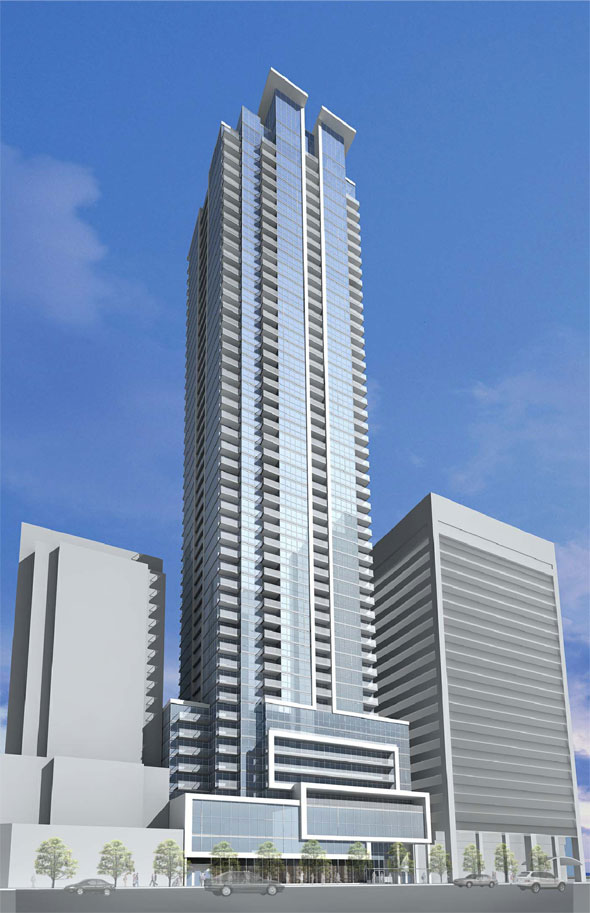 As proposed, the complex would require the demolition of four buildings on Bloor St., including a six-storey condo building and a parking lot on Selby St., a block south.

In its place would rise two residential towers: the main, 155-metre (49 storey) anchor building facing Bloor, and a 41-metre (12 storey) structure with accessible from Selby just to the south. A one-storey building would link the pair.

The units will be mostly one- and two-bedroom, but there will be a small number of three-bed designs, too. 1,395 square metres of retail space is listed in the specifications. The architects are Page + Steele IBI Group Architects, the firm behind the recent Minecraft-esque condo proposed at Yonge and Cumberland. 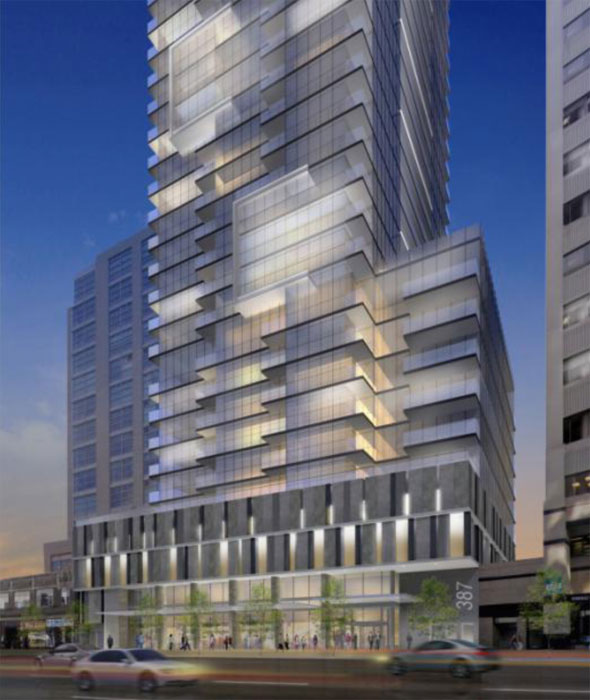 The by-laws currently allow the site to be used for residential purposes, but there's a height limit of 30 metres for any new buildings. The developers will therefore have to convince the Ontario Municipal Board to make an exception before work can proceed.

(Normally Toronto's own planers and city council would make this decision, but because staff did not respond to the application within the set time limit, permission to surpass 30 metres will now be granted by the province.)

In November, the city's Design Review Panel responded negatively to the proposal, criticizing the latest incarnation of the Bloor St. facade, its relationship to the heritage building at the corner of Sherbourne St., and the narrow separation distance between the two towers.

What do you think of the design?

Name: Rosedale on Bloor
Height: 49 and 12 floors (155 and 41 metres)
Units: 345 one-bedroom, 233 two-bedroom, 4 three-bedroom (582 total)
Retail/non-residential space: 1,395 square metres
What's hot: Potentially good news for an overlooked staid section of Bloor St. E.
What's not: Nothing at all interesting about the design. It's pretty much a copy and paste of Page + Steele's proposal for Yonge-Dundas Square.