What kind of apartment does $2000 get you in Toronto?

Once upon a time, $2,000 per month for a rental in Toronto's competitive market would score you a spacious apartment with building amenities and utilities included. In the 1960s, you could rent a house downtown for less than $100/month; fast forward to the early '90s, and a luxury two-bedroom on Queen West rented for around $850/month.

Today, two grand is no longer considered a luxury rental but more like the average in downtown Toronto. In posh neighbourhoods like Yorkville where Pusateri's and Whole Foods are the local grocery stores, the monthly rent will score you a shoebox condo, while other less-desirable pockets of the city might be more affordable.

From micro-condos to a three-storey townhouse, here's what $2,000/month rents you in six Toronto neighbourhoods. 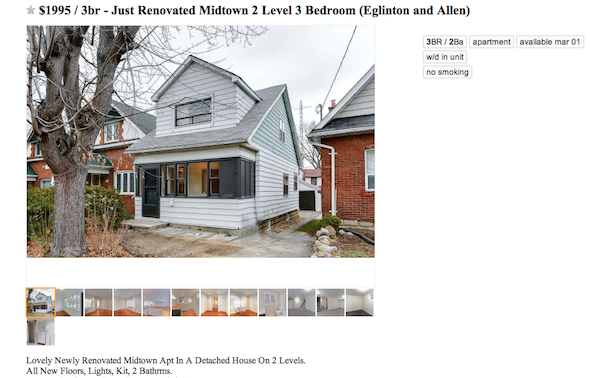 This recently renovated house in midtown looks pretty spacious, with three bedrooms and two bathrooms. It's only a 10 minute walk to the subway, which is a good thing, considering the new LRT construction along Eglinton is making traffic a freakin' nightmare. 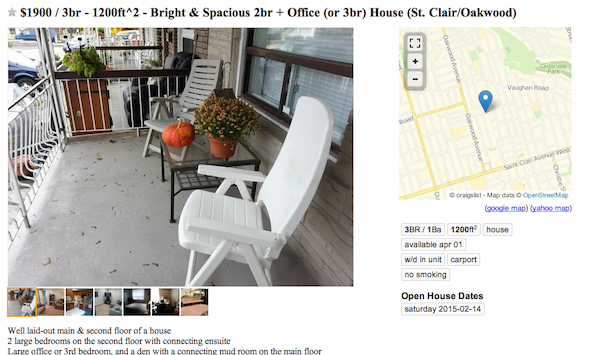 This three-bedroom house seems like a great deal at 1,200 square feet, with a renovated kitchen and new bathroom. Be a little wary of the pumpkin on the front porch - perhaps the owners are having difficulties renting the space. 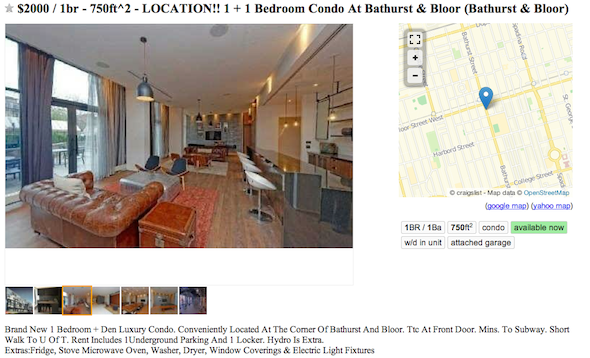 Here's a 750 square foot one-bed plus den in the new B.streets condo at the corner of Bathurst and Bloor. The nine-storey condo was built just last year and it's one of the only new developments in the area, appealing to a young demographic with townhouses in the back for growing families. The recently-sold Honest Ed's will add new retail and development in the Annex in the next few years. 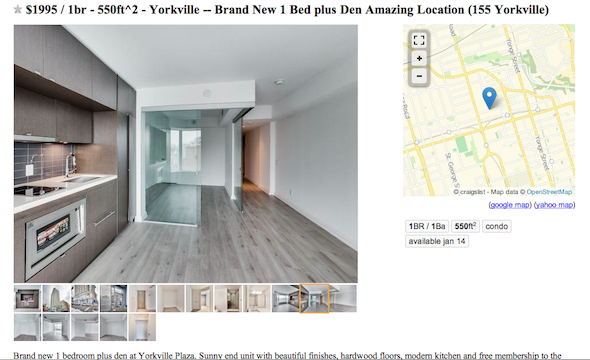 In Yorkville, one of Toronto's most expensive neighbourhoods, $2,000/month won't buy much more than a claustrophobic shoebox. This one-plus-den is 550 square feet in the Yorkville Plaza (formerly the Four Seasons Hotel), and resembles one of those new micro-condos equipped with a Murphy bed. 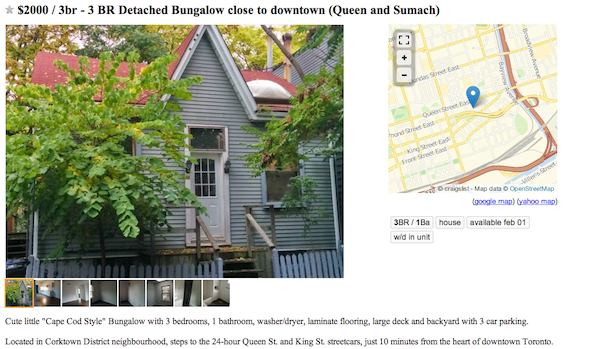 This three-bedroom house is up for rent in the city's east end, a sweet little bungalow that appears lightly renovated and clean. The area has been redeveloped over the years, with new parks and buildings being built in anticipation for the upcoming Pan Am Games. Might want to cash in now. By the summer, the rental price for this hot little number could be doubled while the games are on. 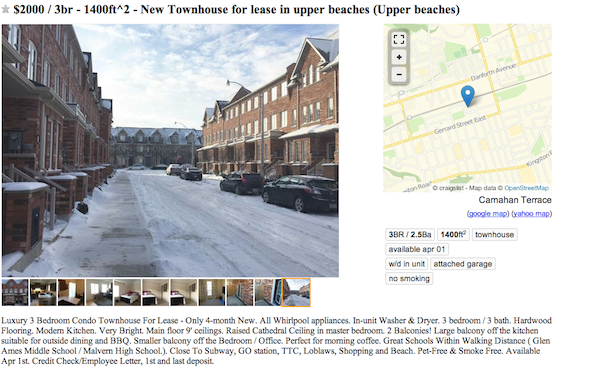 Upper Beaches or east Danforth - call it what you want, but $2,000/month goes further in this realtor-coined neighbourhood. This new townhouse near Gerrard and Danforth is 1,400 square feet with three beds and baths. It has a suburban vibe with a garage, two balconies, and an outdoor patio. Debate the neighbourhood lingo, but rents are still cheaper out here.

Are any of these places worth the rent? Let me know in the comments.