Behind the scenes at the Toronto Archives

The City of Toronto Archives' Spadina Rd. record centre is one of the city's two memory banks. Inside the climate-controlled, fire-proof building stand rows of gigantic 11-metre tall shelves, packed with boxes of documents, photographs, maps, architectural plans, audio tapes, and videos, the majority of them accessible to the public.

In total, there are 133,797 boxes at Spadina Rd., more than twice the number of the seats in the Rogers Centre. To access a box requested by a member of the public, specially-trained record centre workers clad in bright yellow protective toecaps and safety harnesses are lifted high in the air by a hydraulic picking machine.

Each box has a unique barcode that is logged in a computer database. If a member of the public or city staff requests a document, record centre staff can track down the appropriate box within minutes. Though thousands of photographs have been digitized and made available online, in 2014, there were a total of 55,268 requests to view documents fulfilled at Spadina Rd. 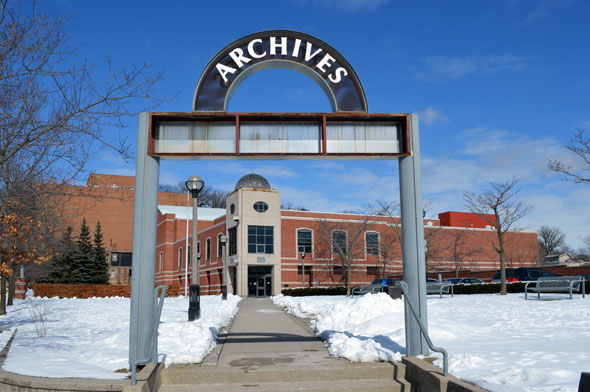 The appraised value of the Spadina Rd. record centre collection was estimated at more than $32 million at the end of 2014. As you would expect, the centre monitored by security guards and CCTV cameras 24 hours a day. 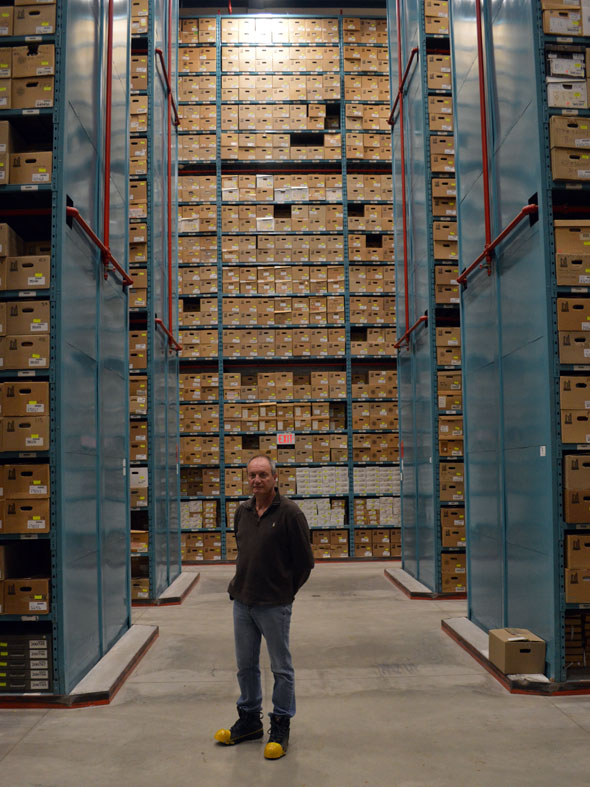 Fortunato DiVizio is a supervisor at the records centre. "I've been here since 1993," he says. "Nothing is arranged by year or anything. It's basically [set up] to maximize the space ... what you see in front, there's another layer behind ... so sometimes to get one box you might have to pull out six boxes." In other parts of the record centre, boxes are stored three or four deep. 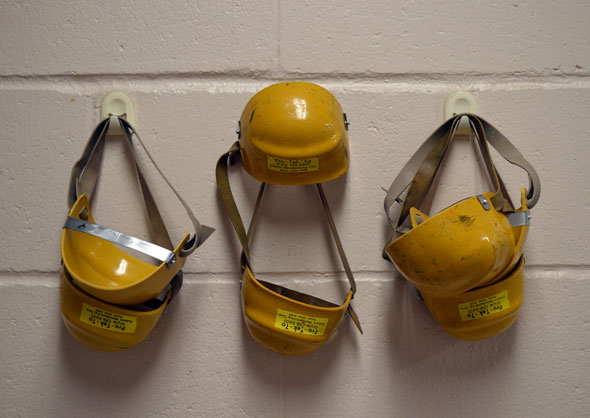 "We have a second [night] shift, a three-man crew that does inventory and destructions," DiVizio says. "The day staff do all the regular processing of boxes coming in and requests going out to clients at the research hall."

Safety is paramount in DiVizio's mind. Staff wear massive metal toecaps and must be tethered to the picking machine whenever they are inside it. "I don't want any injuries, especially when you're working 36 feet up in the air. You'll hit the ground pretty hard and you won't even bounce." 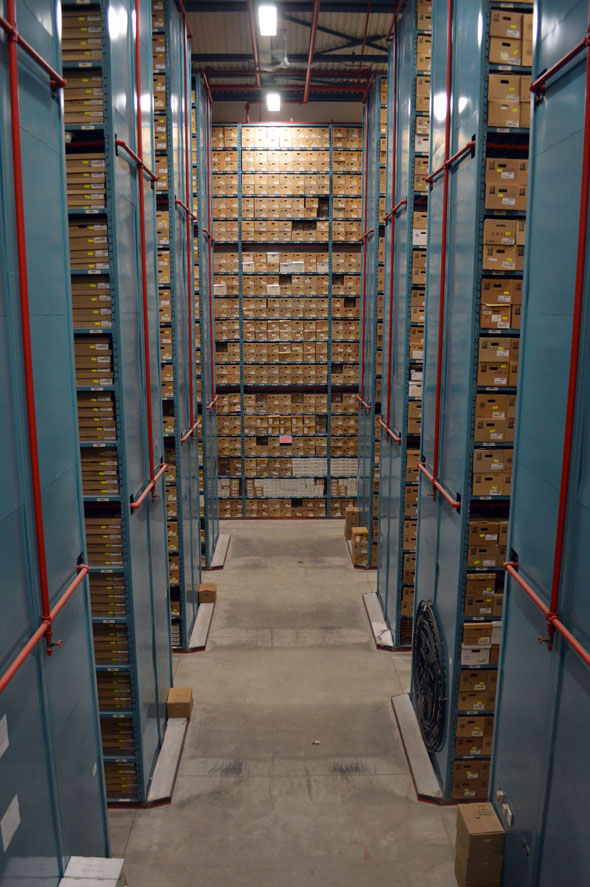 The oldest record in the collection is a map of Toronto Harbour from 1792 made by produced by Joseph Bouchette, a 19-year-old surveyor employed by John Graves Simcoe, the founder of the town that would eventually become Toronto. In 1831, Bouchette described the Toronto harbour as he first encountered it.

"I still distinctly recollect the untamed aspect which the country exhibited when first I entered the beautiful basin, which thus became the scene of my early hydrographical operations. Dense and trackless forests lined the margin of the lake and reflected their inverted images in its glassy surface.

The wandering savage had constructed his ephemeral habitation beneath their luxuriant foliage (the group then consisting of two families of Mississagas) and the bay and neighboring marshes were the hitherto uninvaded haunts of immense coveys of wild fowl. Indeed, they were so abundant as in some measure to annoy us during the night." 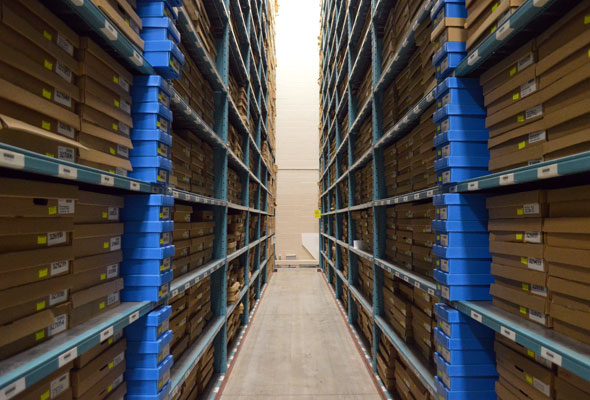 The newest is a DVD copy of the most recent city council meeting. In 2014, 21,973 new boxes of inactive municipal government records and material donated by members of the public were added to the collection. Records and paper documents generated by the city that do not have "enduring historical significance" are destroyed. 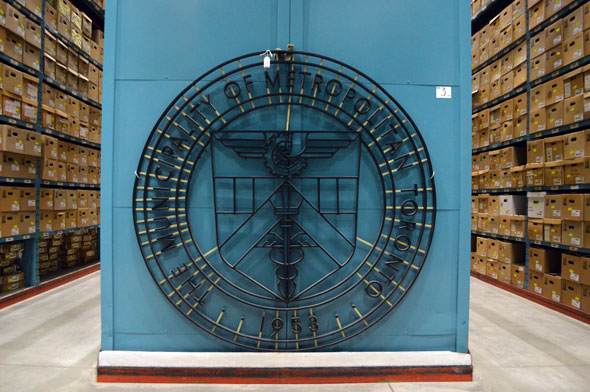 The Spadina Rd. centre is also home to several cumbersome objects. A cast iron Metropolitan Toronto crest that used to hang in the council chamber at City Hall is stored on the end of one of the rows. A 2.75-metre plan of the wharves and piers on the Toronto waterfront from 1884 is the largest single record. The smallest are TTC clothing pins and tickets. The centre is routinely 98 percent full. 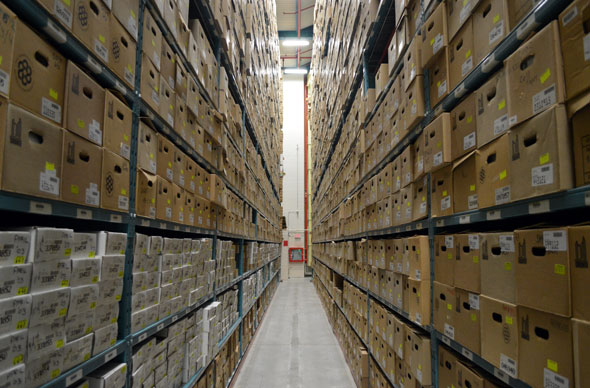 The record centre has appeared in several movies, including Murder at 1600 (1997) and The Third Twin (1997), and TV shows such as Flashpoint and Nikita. Though members of the public can request boxes via record centre staff, the stacks are only normally visible via an elevated viewing window. 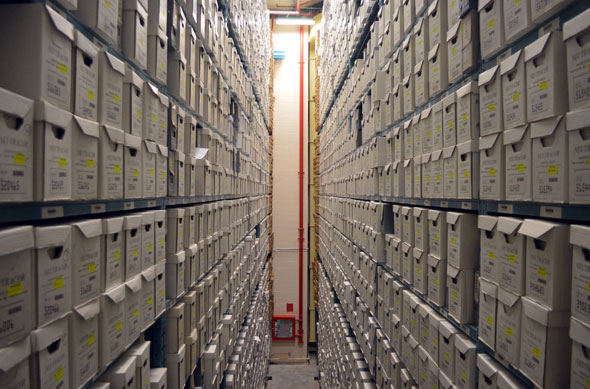 A new fire suppression system was installed in 2014, and in 2001 the roof was replaced. There has never been a fire at Spadina Rd., but if there was advanced fire control systems would be able to extinguish it. Some delicate photographs are stored in a freezer to reduce the onset of damage from vinegar syndrome, a process which slowly degrades cellulose acetate film used in cameras since around 1910.

Because of the delicate nature of many of the files, an advanced HVAC system keeps the temperature and moisture levels at a constant, safe level. "It's probably the best place in the city to work when its really warm outdoors," DiVizio says.