That time when Star Trek fans invaded the SkyDome

Toronto Trekkies have always had something to smile about. From the time when City Hall showed up in an actual episode to the fact that Jack Layton was such a hardcore fan he actually attended conventions donning a tailor made replica of the oft maligned Star Trek: The Next Generation first season "spandex" variant uniform, the city has always been game for Gene Roddenberry's utopic vision of the future. 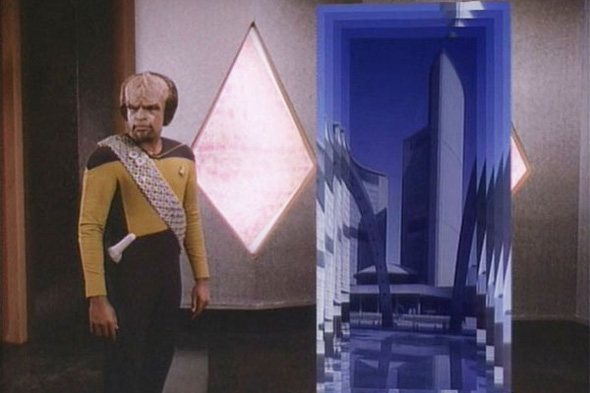 Toronto Trek mania reached its apex in 1994, culminating in a Woodstock-esq pilgrimage to SkyDome where Citytv screened the final episode of Star Trek: The Next Generation on May 25th to a raucous crowd of 40,000 people. Klingon cosplayers, Ferengi beer drinkers, casual fans and Starfleet nerds all rubbed shoulders to see out the popular series on the Jumbotron, hosted by a cadre of Citytv's finest personalities.

Monika Deol, the grand dame of then red-hot Electric Circus, turned heads in her hip hugging Deanna Troi catsuit and her use of the correct nomenclature "Trekkers". The still dearly missed John Majhor, legendary frontman for proto MuchMusic series Toronto Rocks, opted for his Sunday best command red vest, while irie weather Don Harold Hosein appeared in an operations gold uniform. Gavin McGarry, the zany co-host of Breakfast Television was also there, sporting an incongruous horn on his head. 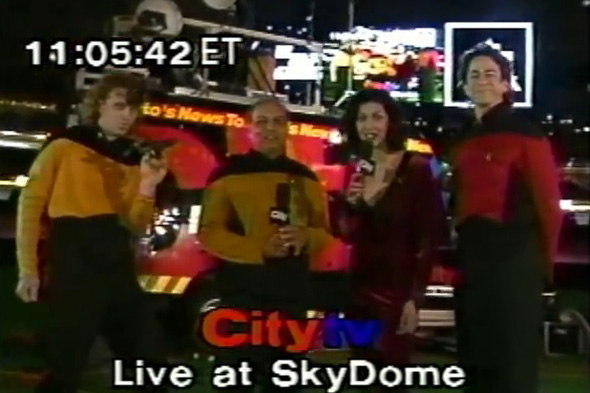 Notable guests included Humble Howard from CFNY and Mayor June Rowlands, who seemed to be having a ball gushing on air about her favourite Trek characters Geordi LaForge and Jean Luc Picard.

The evening kicked off at 7PM with the Trek episode "Yesterday's Enterprise", voted by CFNY listeners as their all-time favourite, followed by a behind the scenes look at the series entitled "Journey's End" at 8PM. The main attraction, Star Trek: The Next Generation's finale "All Good Things" aired at 9PM, by which point event sponsor Labatt Ice's wares had no doubt contributed to the cosmic carnival atmosphere.

The ticketed event was the second highest TV audience at the SkyDome after Game 6 of the 1993 World Series, while the Toronto Daily Bread Food Bank reported a boon of donations thanks to the massive turn-out. 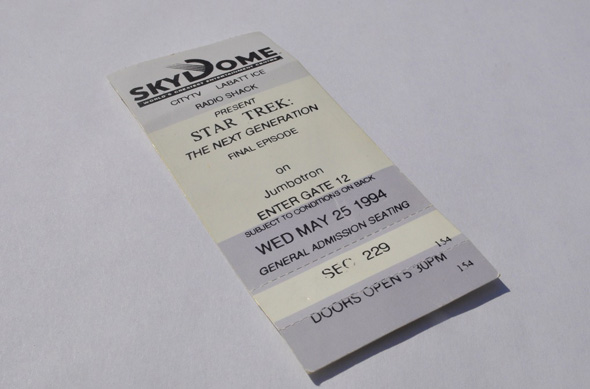 The final episode of Cheers had been shown at the Dome the previous year, but poorly organized seating arrangements (first come, first serve) and bad sound had marred the event. For Trek, "Your Federation Station" Citytv paired up with Radio Shack and Labatt Ice to arrange a suitable sign off for the top-rated show.

It's frankly impossible to imagine such a frenzied gathering for a TV series finale in this SVOD obsessed day and age, never mind for something as cultish as Trek. While the brainless J.J. Abrams Star Trek movies had their fair share of box office success, in hindsight they appear as nothing more than an audition for his big pimpin' Star Wars gig. So far it seems Trek's forte as a successful mainstream crossover was well and truly rooted in early to mid-1990s emerging internet culture, at least evidenced by pre-amalgamation Scarborough's notorious community 10 Star Trek call-in show Ten Forward.

This week incidentally sees the release of Star Trek: The Next Generation's final season on Blu-ray, re-mastered in HD and sporting a Romulan Warbird sized amount of extras showcasing how much work went into that final episode, and thankfully it all manages to hold up. It's also sobering to note that more time has passed between the airing of "All Good Things" and now than had passed between the conclusion of the 1960s campy original Kirk led Star Trek and the premiere of Star Trek: The Next Generation in 1987.

Two decades on from its finale, Star Trek: The Next Generation remains a classy example of thoughtful, humanistic Science Fiction, far from the "people debating in futuristic waiting rooms" it is often accused of being. Besides which, is there any series which could merrily bring Toronto together again under one roof with such fervour?