10 quirky things to know about the Annex

The Annex has always been an affluent area. Shortly after the neighbourhood officially became part of Toronto in the 1880s, department store magnate Timothy Eaton and distillery president George Gooderham, lured by the semi-rural privacy and large plots of land, built mansions along its tree-lined streets. Today, the Annex is home to numerous well-kept Victorian bay-and-gable homes and grand mansions built in the "Annex style"--large arches, corner turrets, and big attics.

Apart from architecture, the Annex has a history that includes abandoned expressway plans, an alternative free university, and even a lost river. Here are 10 quirky things to know about the Annex.

The Annex was established as a semi-rural retreat for Toronto's rich
The old City of Toronto began expanding beyond its downtown borders in the 1880s, annexing the independent town of Yorkville and absorbing two more subdivisions, the Toronto Annex and Seaton Village. The Annex was subdivided by Simeon Herman Janes, a land speculator who gambled on the idea that large homes on tree-lined streets away from the centre of the city would be popular with the Toronto's wealthy elite. He was right, of course, and the sale of the Annex land made him a fortune.

You are probably pronouncing Spadina wrong
Spadina Road and Avenue are named after Spadina House, the home of Dr. William Baldwin (of Baldwin Street,) which sits atop a ridge at Davenport Road. Baldwin used an anglicized version of the Ojibway word "espadinong," which means hill, and the property's long driveway took on the name, too. The word is pronounced closer to "spadeena" than "spadinah," but over the centuries, for reasons that will probably never be entirely clear, the latter prevailed. 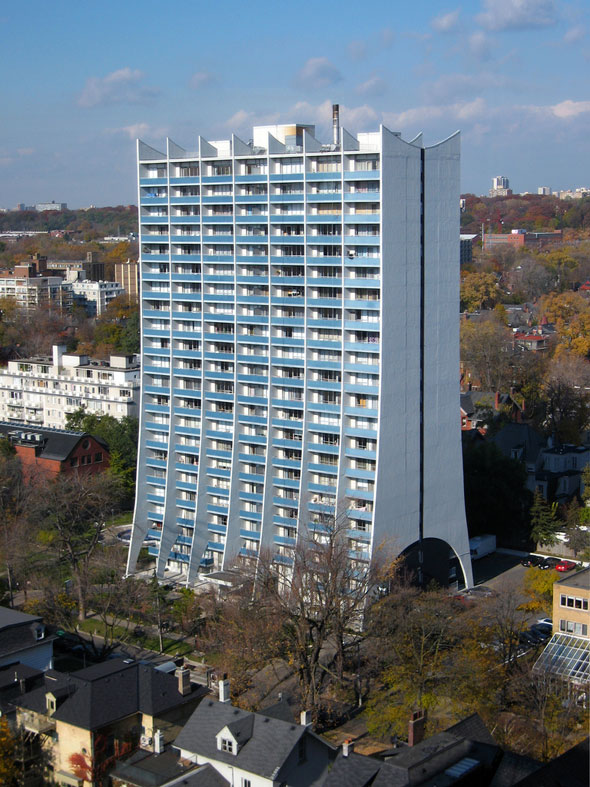 The Annex is a haven for fans of the space age architecture of Uno Prii
Fans of space age modernist architecture are spoiled for choice in the Annex. Estonian-born architect Uno Prii, famous for his high-rise apartment buildings, designed 11, 35, and 44 Walmer Road, 485 Huron Street, and my personal favourite, 20 Prince Arthur Avenue (pictured,) a building that looks capable of space flight.

Spadina station could have been called Lowther
Spadina station, as any regular TTC rider knows, is really two separate entities: the Spadina line platforms and the Bloor-Danforth platforms. When the Spadina subway was still in the planning phase, the northern platforms were envisioned as a separate station, to be called Lowther. The two were later merged and a moving walkway installed to ease the arduous connection. It has since been removed.

The Annex could have been cleaved in half by the Spadina Expressway
There was a time when Metropolitan Toronto, the now defunct senior level of government above city council, seriously considered running an expressway from the 401 south to the Cedarvale Ravine then down Spadina Ave. to the waterfront. Had it been built, the Annex would have been torn in half. Allen Road and the Spadina subway line were the only pieces of the project ever built.

Lee's Palace used to be a movie theatre
When 782-seat Allen's Bloor Theatre opened in 1919, it was "one of the most luxurious suburban movie houses Toronto had to offer," according Silent Toronto, an online archive of local cinema information. The building reopened as the Blue Orchid, a restaurant that featured live burlesque shows, before becoming Lee's Palace in 1985. 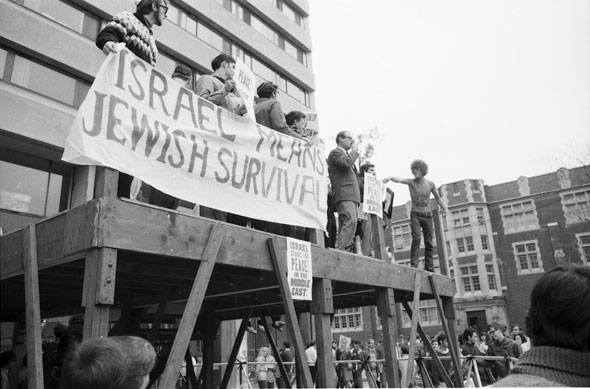 There used to be an experimental university and housing co-op on Bloor
The sign on the outside of 341 Bloor Street West says Senator David A. Croll Apartments, but in 1968 the apartment towers near St. George Street were home to a pioneering student-run educational facility and housing co-op. Learning at Rochdale College was offered for free and there were no structured courses, curriculum, exams, or formal degrees, and students and teachers lived together. Rochdale closed in 1975 due to financial troubles and complaints that the school had become a haven for drug users.

Jean Sibelius Square Park is named for a Finnish classical composer
Jean Sibelius is most famous for his series of seven symphonies, which include Finlandia and Karelia Suite, but in the Annex, his name graces a public park. The green space was known as Kendal Square, but it was renamed at the request of one "B. O. Sundman" of Helsinki, according to the Globe and Mail, in 1956 to mark the composer's 90th birthday.

One of Toronto's most famous lost rivers flowed through the Annex
Taddle Creek rose outside the neighbourhood in present day Wychwood Park. From there, it flowed for 4 kms southeast through the Annex to its mouth near the Distillery. The river is now confined to the sewers, but Philosopher's Walk and the noticeable kink on the west side of Queen's Park Cres. are evidence of its existence.

The Annex has a lane named for a horse who helped cure diphtheria
Previously City Lane #2303, Crestfallen Lane is named for a sad-eyed horse owned by John "Gerry" FitzGerald, a young doctor who purchased nags destined for the glue factory and built up their immunities to diseases like rabies and diphtheria. FitzGerald distributed vaccines created using Crestfallen and other horses to the poor of Toronto as a public service. He killed himself in 1940. Frederick Banting and Charles Best, the developers of insulin, were among his pallbearers.