Jilly's could become a boutique hotel and restaurant

The new owners of the Broadview Hotel are planning to extensively renovate the 123-year-old Riverdale building to include a 58-suite hotel, restaurant, cafe, and rooftop terrace.

According to a site plan application filed with the city, Streetcar Developments, which bought the former Jilly's strip club earlier this year, would like to build a four storey addition to the building and re-work the interior to provide six floors of equal ceiling height, rather than the current four.

The new hotel, which would cover five of the finished building's six floors, will have suites looking east and south and a main entrance off Broadview Avenue. An "executive suite" is planned for the upper floors of the corner turret. 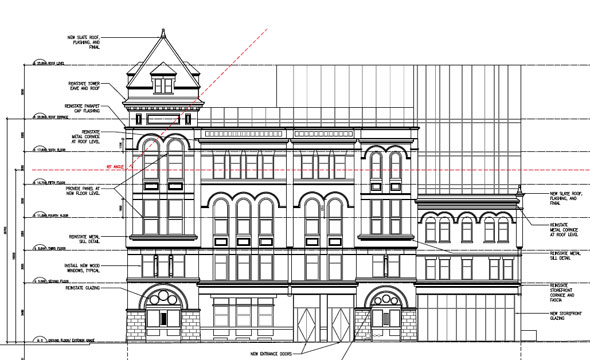 The new portion of the building, architects imagine, will be built on top of a smaller brick structure at the back of the hotel--currently clad in faux-wood paneling and a sign promising "the best party in town"--and wrap around to the front via the upper floors. The ground floor of the existing rear structure will get a new glass front and be turned into a cafe.

The restaurant portion of the renovated hotel will be at the corner of Queen and Broadview.

The plans don't include any condominium units.

Built in 1891 by soap magnate Archibald Dingman, the exquisitely detailed red brick building housed a branch of the Canadian Bank of Commerce at street level, and offices leased by lawyers and dentists in the floors above. In 1907, the building was turned into a hotel by new owner T.J. Edwards, and over the decades it became less and less salubrious. In 1981 it was known as "Maxi's Lounge," two years later the name had changed to "Kicker's." 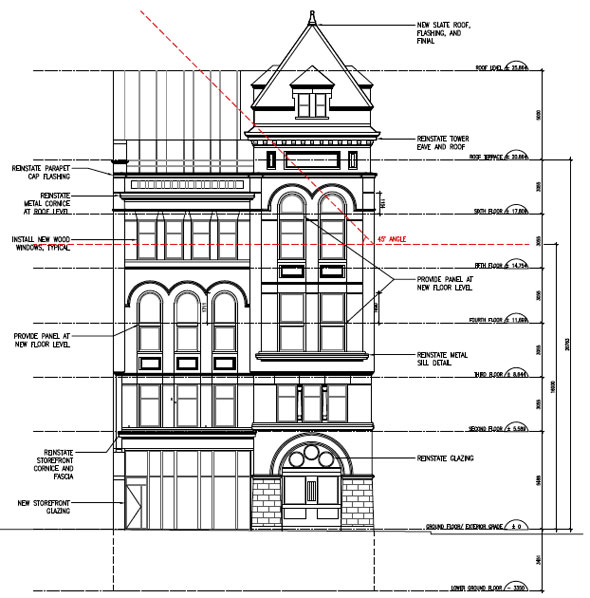 As Jamie Bradburn recalls at Torontoist, in 1991, the hotel hosted "a boa constrictor, a python, and a 450-pound defanged Siberian tiger named Qedesh" as part of a show run by Jane Jones Exotic Circus.

The dilapidated hotel almost collapsed in 2013, and the owners were forced to make emergency repairs to keep the building standing.

Streetcar and ERA Architects are planning to restore many the lost and damaged exterior detail, including metal windowsills details, flashing, and cornices, and add a green roof to the building.

The designs on file with city are still preliminary, however, and Streetcar Developments says it still hasn't hammered out all the details.

"Nothing has been finalized," a spokesperson said Friday. "At this time, the company is really just exploring options."