Toronto is in love with the idea of the High Line, New York's much-lauded elevated park. There have been dreams of re-purposing the Gardiner Expressway in such a way, but no one is holding their breath for such a scenario to unfold in our lifetime. The latest Toronto High Line proposal seems at least a bit more realistic, even if it's still a stretch. Pitched by developers Urbancorp and First Capital Realty, this vision would see an extended pedestrian bridge constructed to connect Liberty Village with West Queen West.

There's already plans in place for a city-apprived shorter bridge near Sudbury and King, but this proposal would drastically increase the scale by stretching the bridge alongside the rail corridor for what looks to be a kilometre or so (it's hard to estimate accurately just how long it would be based on the initial renderings). 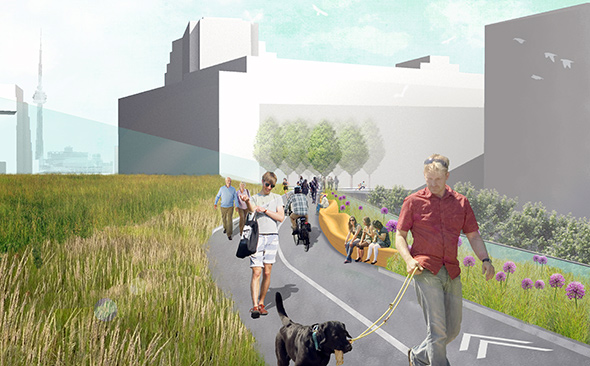 It's a fascinating idea, right down to the faux grassroots campaign the developers have launched mimicking the movement that eventually led to the construction of the High Line in New York. The new website seeks "Friends of the King High Line," but doesn't provide much information as to how the bridge might be funded. Will the developers be kicking in, or is the idea to create some buzz in the hopes of securing city funds? 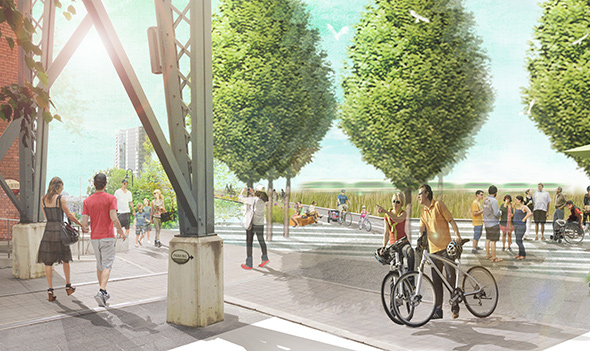 There's also the issue of the route. As best I can tell, the bridge covers the same territory proposed for the bottom end of the second phase of the West Toronto Railpath, a project which has the support of city council but is mired in complications related to Metrolinx's South Georgetown expansion plans. Could the two projects be combined? Possibly. Right now, however, it seems this High Line plan is very much at the fantasy phase.