The top 5 unsolved mysteries in Toronto

Writing about the history of Toronto occasionally produces an unexpected tidbit so tantalizing it's difficult to let go. Stories of hastily abandoned secret tunnels, tragic unsolved murders, a lost prototype of a failed ocean liner, and even a vanished safe have all made headlines in this city in the last 200 years, some of them finding their way into stories on this site. The others have languished in a folder on my computer awaiting a chance to be retold.

Here are five of Toronto's strangest and most enduring unsolved mysteries.

What happened to Ambrose Small?
Ambrose Small was a theatre tycoon and playboy with a taste for money and women. At the peak of his notoriety in the early 1900s, Small was famous for his raunchy parties held out of a private room at Toronto's Grand Opera House, the flagship of his empire, at Yonge and Adelaide. In 1919, Small abruptly decided to sell up: he handed control of his theatre business to a national company for $1.7 million--about $21 million in today's money.

In December that year, Small, dressed in a dark tweed suit, an overcoat with a velvet collar, and a soft felt hat, deposited a $1 million cheque--the first in a series--and vanished without a trace. No body was ever found and his small fortune remained untouched. The Papers speculated Small had been shot, burned in the theatre's furnace, or waylaid by illness, but there was no evidence for any of the theories.

The only sign of foul play centred on John Doughty, Small's former aide. The day his employer's disappearance had been made public, Doughty took $150,000 in bonds from the company safe and fled. He was eventually tracked down, but police couldn't link him to a crime concerning Small. The case was officially closed in 1960, but the fate of Ambrose Small remains unknown. 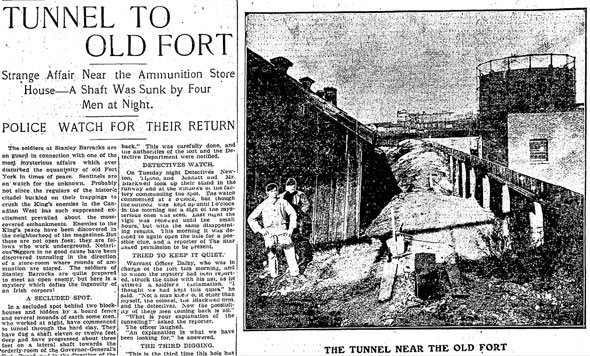 Why did someone dig a tunnel under Fort York?
Late October 1904: William Morton, the foreman of Park, Blackwell, and Co., a pork packing company located near Fort York, spots two figures in the half light on the ramparts surrounding the historic fortification. Sensing his gaze, the group drops to the ground in an attempt to hide. A week later, a similar occurrence further raises Morton's suspicions.

On further inspection, Morton and a colleague discovered a patch of freshly disturbed soil covering the entrance to a rectangular tunnel running about 12 feet down into the soil. The walls were expertly braced and at the end a pick, shovel, pail, and length of rope. When the pair's eyes adjusted to the dim light, a side tunnel was discovered running east toward the block houses. Nearby, they found a shovel engraved with the initials M.C.M. and several empty bottles.

The mysterious diggers never returned, perhaps sensing the discreet police surveillance. According to the Toronto Daily Star, the incident was the third of its kind in the same location. Each time the tunnel had been filled in with rocks only to be re-opened. Theories as to the tunnel's purpose ranged from buried treasure to a possible hiding place for stolen goods, and even a hiding place for escapees from the nearby Central Prison. Days later William O'Harra, who has been caught "digging for buried treasure" in the same location a decade earlier, was re-arrested on a charge of drunkenness, but refused to comment on the tunnel. 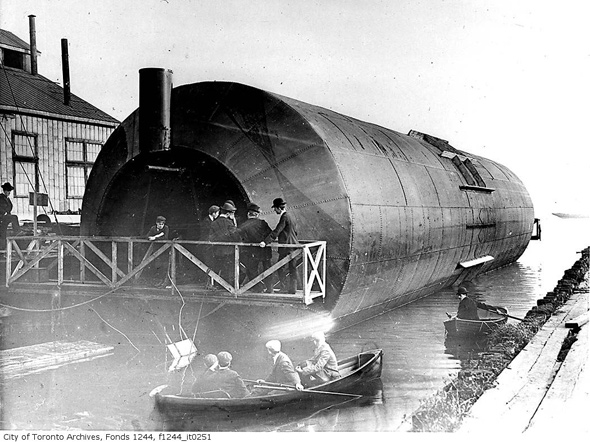 What happened to Knapp's roller boat?
Everything about Frederick Augustus Knapp's "roller boat" was weird. Built and launched on Toronto's waterfront in 1897, the cylindrical vessel was 110 feet long, 22 feet tall, and supposedly capable of cruising on top of the water rather than through it. It's inventor hoped the design would slash Atlantic crossing times and make him a fortune.

Unfortunately for Knapp, the roller boat was slow and extremely unreliable. It broke down on several occasions and was involved in repeated mishaps, the most serious of which caused considerable damage to the Turbinia, a large lake boat. Knapp sold the hull to cover the cost of the repairs and the shell was left half submerged on the shore of Lake Ontario near Lake Shore and Sherbourne for several years. It's not clear whether the boat was removed or buried by infill where it lay. A 2005 City of Toronto archaeological assessment suggests it might still be under Lake Shore Blvd. behind a FedEx facility. 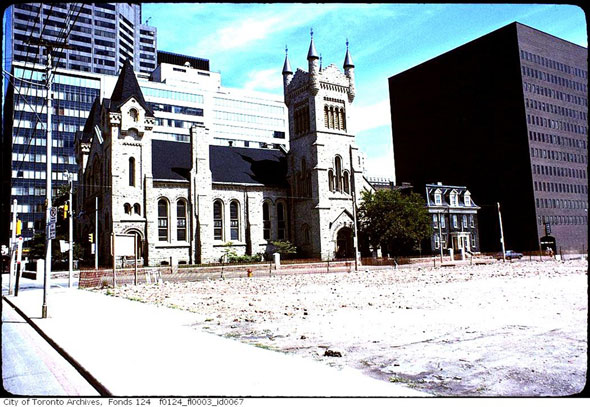 What was in the safe found in an underground room at King and Simcoe?
The site of Roy Thomson Hall has in the last 100 years been the location of Ontario's Government House and a Canadian Pacific freight office. Before the development of the downtown railway lands, sidings penetrated as far north as King Street. After a highly controversial land deal was approved in 1976, work began on New Massey Hall--the original name of Roy Thomson Hall--and the surrounding land, which eventually became home to Metro Hall.

Digging the foundations for the music hall to detailed plans prepared by surveyors, workers struck an unexpected wall, behind which was a room directly beneath Simcoe Street. It was 10 feet square and contained a chair, a table, two empty mugs, and a locked safe. The contents were hauled to the surface--the safe was about 2 feet square and weighed "several hundred pounds"--and suddenly vanished. Workers had planned to crack the safe open, but chose to wait. "It wasn't a priority," Eugene Blane, the project manager, told The Star.

Workers found a similar tunnel under Wellington Street, but feared it might collapse if entered. Both spaces were filled in and the safe was never found. 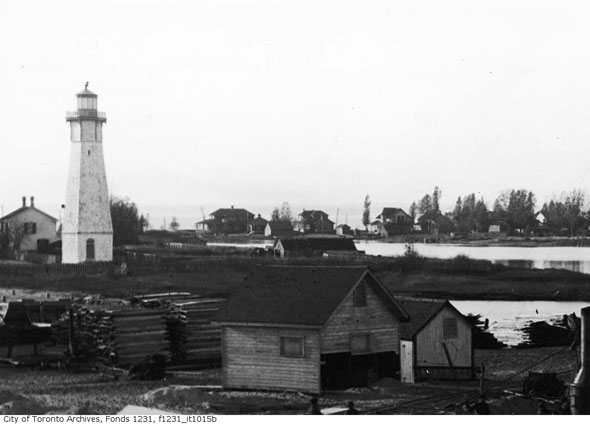 Who killed the city's first lighthouse keeper, and why?
The story of the death of John Paul Radelm端ller has morphed over the centuries from tragic crime to urban myth. Thanks to research by Spacing contributing editor Sarah B. Hood, we know that the German-born keeper of the Gibraltar Point Lighthouse, who took his post in 1809, was also responsible for collecting customs duties in the nearby port. He was found murdered on Jan. 3, 1815. Two suspects--John Henry and John Blowman--were arrested.

The pair pled not guilty to the crime and were released. No-one was ever convicted in connection with Radelm端ller's death--even the motive for the crime was unclear (Hood suggests he was killed for the customs money he kept.) The tale has since been exaggerated to include ghosts, bloody lighthouse steps, and tales of bootlegging, none of which have been corroborated. Almost 200 years later, we're further than ever from understanding what really happened that winter's night.