The PATH is about to get a major southbound extension, connecting it to the city's waterfront for the first time. The second section of a pedestrian bridge, which has already been assembled, will be installed over Lake Shore Blvd. this weekend as progress continues on the development it will link to, RBC WaterPark Place. Designed by WZMH Architects, the understated structure will extend from just south of the Air Canada Centre under the Gardiner to 1 York Street. A third section spanning Harbour St. will be installed in September. 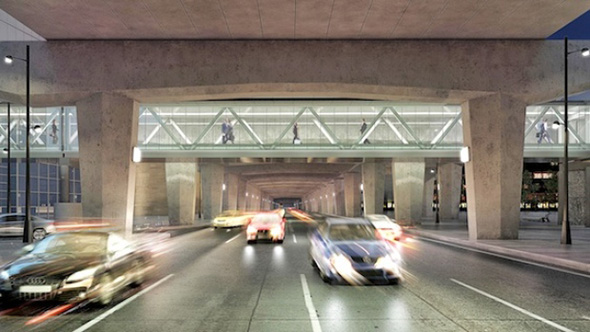 The bridge is yet another example of the development push southward in Toronto. A decade ago there wasn't even such a thing as "South Core," and now the area along the Gardiner is flush with high rise buildings. While long a home to condos, the strip to the north of Queens Quay is in the midst of a commercial boom with major retail space currently in the works as well. This pedestrian connection is ahead of the curve in part because RBC insisted that it be in place before it would move its Toronto operations southward was that the complex feature a PATH connection. That's good for everybody.

What do you think? Will infrastructure help make the waterfront more accessible or will the massive developments further block the city from the harbour?