Massive development in the works on lower Bay St.

Details of a massive new downtown Toronto development proposal are starting to emerge. Urban Toronto has got the lowdown on a series of events in the development industry and come up with tantalizing details about 45 Bay Street, a potentially huge downtown development project on Bay Street south of Front.

Rumours of the project, which is roughly opposite the Air Canada Centre, have been circulating online for some time, but without hard details or renderings.

As seen today, the complex would straddle the Union Station rail corridor--a first for a building in Toronto--and provide space for a new bus terminal. Part of the complex is shown in place of the surface parking lot at Bay and Lake Shore, other parts appear to be rising out of the curved neoclassical Dominion Public Building at Front and Bay.

It appears there will be a large public space, possibly retail, and perhaps a rooftop park.

Beyond that, details are scarce. The designer, Urban Toronto reports, is Wilkinson Eyre, a UK-based firm responsible for the current renovations at Battersea Power Station in London (think Pink Floyd) and a massive casino complex in Sydney, Australia, which is due to become that city's tallest building.

What do you think of the renderings? 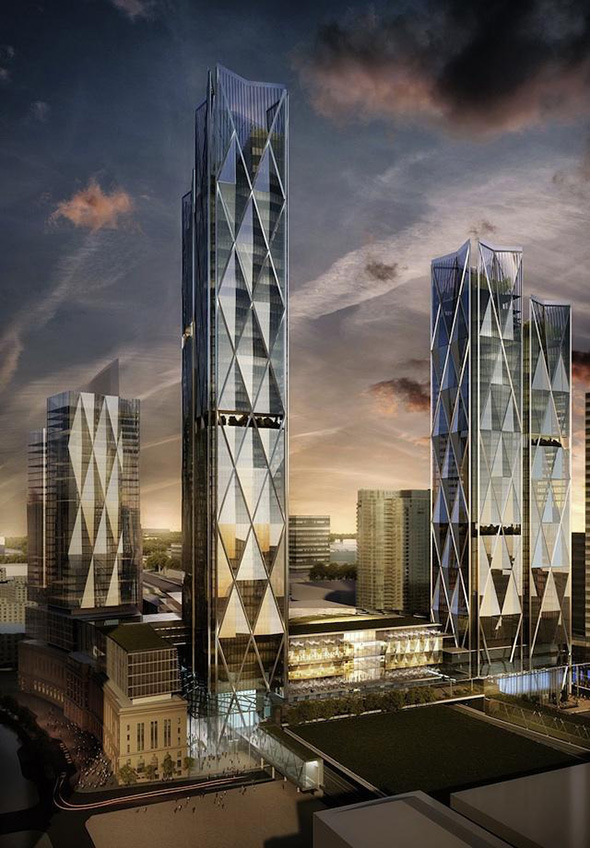